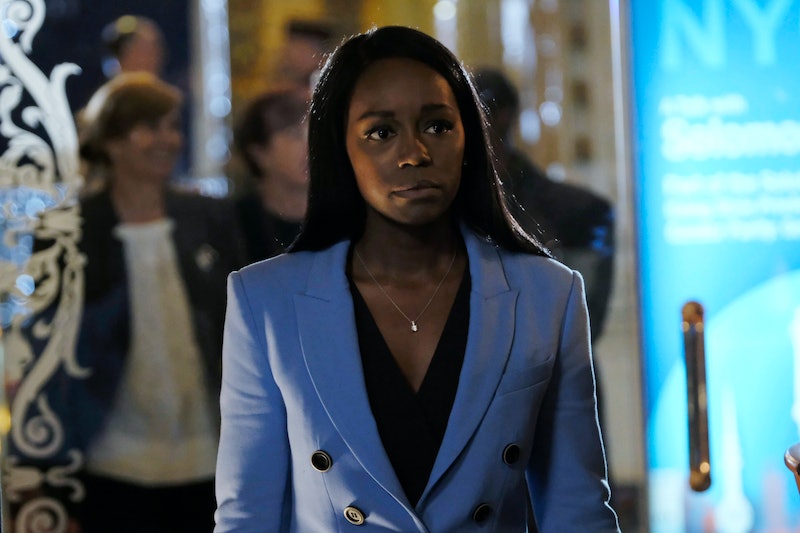 The death of Dwight Halpern led Michaela to believe that the search for her biological father had come to a close. But after listening to one of the tapes from Annalise's psychiatric sessions with Sam, it seems there's now a chance Michaela's father is still alive on HTGAWM and not the person she thought he was. Based on Annalise's comments during the session, she suspected that Dwight's lawyer, Solomon, had slept with Michaela's mother and got her pregnant.

Naturally, the news came as a complete shock to Michaela, though it's unclear how she will choose to proceed going forward. She was already furious with Annalise for keeping her connection to her birth father a secret, so in light of this new layer of betrayal, that feeling is sure to get all the more magnified. Annalise saw how upset Michaela was after learning of Dwight's death, believing she had lost any chance of getting to know her biological dad. Given everything Annalise knew (or at least suspected) about Solomon, why didn't she choose to share that information right then and there?

Is it possible that this Solomon guy is a worse alternative to Dwight? Considering that Dwight murdered Michaela's mother, that would really be saying something.

Granted, it's entirely possible that this could all just be another red herring, leading Michaela to discover Annalise's suspicions to be wrong. The only person who definitively knows the story (and who is still alive to tell it) is Solomon himself. Given the determined look on Michaela's face at the end of last week's episode, it's only a matter of time until she tracks him down to get his side of the story. That is — if she's even able to do so. What are the odds that Solomon is also no longer alive, leaving Michaela at a dead end once again. It seems unlikely, but then again, How To Get Away With Murder has a knack for delivering unexpected plot twists.

Aja Naomi King hasn't spoken directly about how this storyline between Michaela and her father plays out, however, she does sometimes comment on the show via Twitter. Perhaps one day she'll slip up and post a remark, accidentally give away what happens. But until that time comes, Michaela will continue to be a prime suspect in Annalise's murder. Because while she's known Annalise longer, this latest set of lies and betrayals could make Michaela decide that blood is thicker than water.