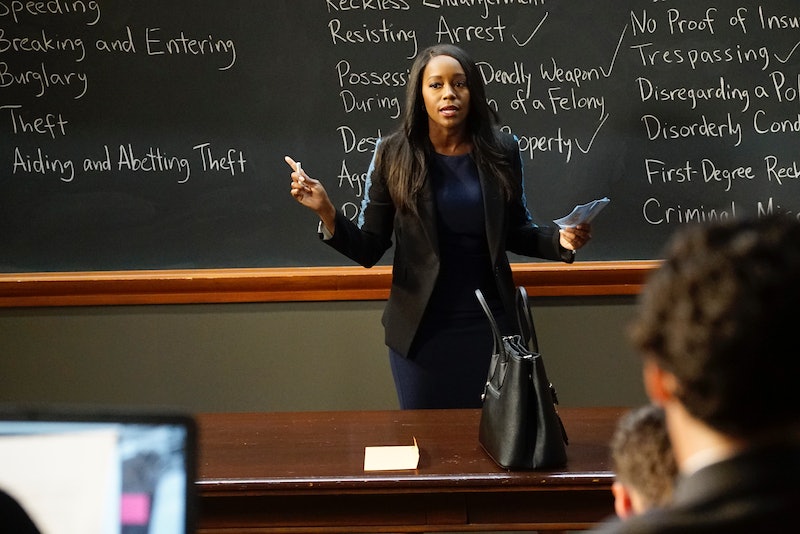 If How To Get Away With Murder has taught fans one thing (aside from how stressful it actually is to get away with murder), it's that nothing is ever as straightforward as it seems. When one question gets answered, a million more pop up in its place. That's why theories about Michaela's dad on HTGAWM are running through fans' minds these days. After learning a few details about his life, there's undoubtedly still a lot more to this character than meets the eye.

In the Season 5 finale, Oliver was able to find out that the name of Michaela's birth father was Dwight Halpern and that Annalise knew him back during the early part of her career. After being made aware of this connection, Michaela confronted Annalise, who admitted that she'd worked on his case way back when, but insisted that she didn't know anything about him personally. Given her track record with lying, Michaela refused to take Annalise at her word, especially since her former mentor has had outside links to other members of the Keating Five in the past prior to meeting her at school (looking at you, Wes!).

So who is this Dwight guy, really, and how will his connection to Annalise impact the plot moving forward? Here are a few possibilities...

Reddit user gigitheory suspects that the death of Michaela's mother may be even more sinister than fans realize, predicting that "Michaela shot her mom and [got away with murder] by pinning it on her dad and I think annalise helped her do so, then had a name change and was put in foster care and moved through the system a lot." If Annalise is lying about how well she knew Dwight, this would definitely be a good incentive to keep Michaela in the dark.

Dwight Is Related To Annalise

HTGAWM is full of twists, so it wouldn't be too big of a stretch for a mystery relative to come to light. Is it possible that Dwight and Annalise know each other on a familial level? Anything is possible at this point in the game.

Michaela's Dad Had A Relationship With Vivian Maddox

As of now the story is that Dwight murdered Michaela's mother, which is why he was in prison doing time. But Reddit user TruGemini poses a theory that the mother actually survived the incident and is someone Michaela has already met: Vivian Maddox. This would not only allow Michaela the chance to reunite with at least one of her birth parents, but it would also mean that she and Gabriel are half-siblings, thereby seriously complicating their romantic relationship. (Cersei and Jaime, eat your hearts out!)

Then again, it's just as possible that Annalise is telling the truth for once and that she really didn't know Dwight at all. Perhaps the only purpose Dwight will serve is to give Michaela a reason to hate Annalise, making her a logical suspect for Annalise's murder.

Michaela's dad may no longer be alive, but the mystery of how he fits into this complicated storyline lives on and could play a crucial role in how this series comes to a close.