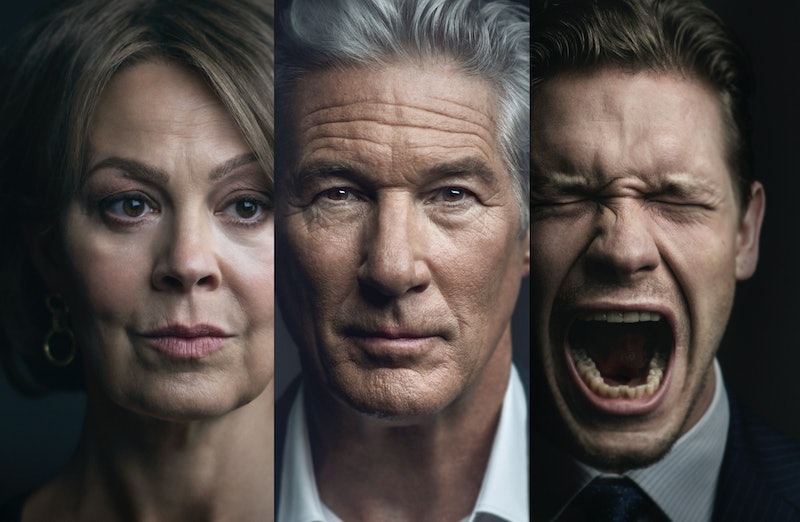 A family driven by power and money. A former marriage in a state of disarray. A child whose life has gone off the rails. None of that sounds a million miles away from many families really, does it? In a world driven by cash, desperate grabs for power, and questionable values to get to the top — it really is a rich man's game. With BBC's latest drama being so close to the bone, it's easy to wonder: is MotherFatherSon a true story?

The story told is not a true one, no. However, the idea of a family torn apart in pursuit of power and people peddling populist political agendas is absolutely based on truth. Based on the idea of power itself, writer Tom Rob Smith spoke about the populist agenda at a screening in London. As the Radio Times reports, Smith said:

"You can see we're dealing with issues of populism, but we're not really talking about specific parties… there's no real life references in this piece. We don't talk about real politicians, we don't mention any real events. But it's about the nature of power."

In the opening lines of the trailer for the show, someone is heard asking Max Finch (the father of the MotherFatherSon trio): "Are you here to pick a prime minister or deal with your son?" That says it all. Clearly, this is a powerful man, but one with everyday familial dramas. And who better to play this complex character than eternally silver fox, the actual Richard Gere? Max is a media mogul and a big player both financially and politically, and is on the brink of giving his political backing to someone. But Max's political backing isn't just a cheeky donation here and there. Nope, it is basically a signed, sealed, delivered guarantee that whoever receives it will become the leader of the country.

Gere spoke to the BBC about his character:

"Max is involved with UK politics, and he’s the kind of guy that’s always got a lot of plates spinning in the air. In episode one we see some of those plates spinning, and really get a sense of his energy and how he engages with the world".

However, Finch's other stress in his life is his ex wife Kathryn (Helen McCrory) and their wayward son, Caden (Billy Howle). Caden has been living a pretty wild life, engaging in copious amounts of drugs and alcohol. This guy is seriously enjoying the follies of being young, rich, and powerful without having much to answer for.

However, tragedy soon strikes. The family's world is sent into a tail spin when Caden suffers a massive stroke owing to his narcotics addiction, which leaves him completely unable to care for himself. Howle spoke to the BBC about the gravity of his character's illness:

"Many families are dysfunctional, but due to this family's power there are huge consequences for others in this case. It could be incredibly detrimental to a large number of people. You'll see across the series, but the decisions that Max, Caden and Kathryn make in the midst of this family breakdown could be life-changing for potentially millions of people. So pretty scary stuff!"

MotherFatherSon begins on BBC One Wednesday March 6 at 9 p.m.