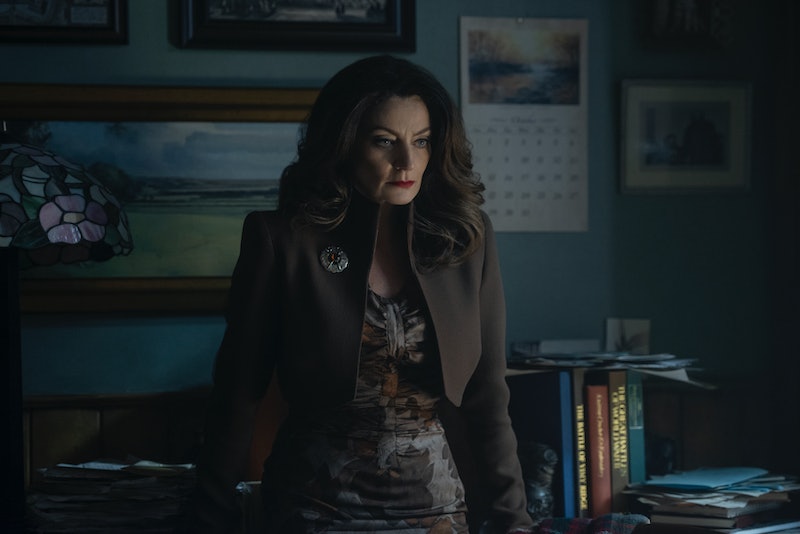 Spoilers ahead for Chilling Adventures of Sabrina Season 1. After her magnificent turn as Missy on Doctor Who, there was no doubting that Michelle Gomez would bring something delightfully sinister to Chilling Adventures Of Sabrina. But is Ms. Wardwell bad on Chilling Adventures? Well, that's kind of a complicated query. The character begins as a meek, unassuming history teacher, but after she picks up a strange girl on her way home from the movie theater, her entire life changes. Moments later, the girl stabs Ms. Wardwell in the throat and possesses her body. With that, the real Ms. Wardwell is no more and Madam Satan has risen.

The Dark Lord, aka Satan himself, really wants half-witch, half-mortal Sabrina to go through with her Dark Baptism and sign her name in the Book of the Beast. So, he sends this new "Ms. Wardwell" to push Sabrina toward the path of night, which she does with a little help from Father Blackwood. Viewers are already in on the secret that Ms. Wardwell is Madam Satan because Netflix made it clear while promoting the show, but Sabrina is ignorant of this fact, even despite the teacher's drastically changed demeanor. It takes Ms. Wardwell saving Sabrina, Aunt Zelda, Aunt Hilda, and Ambrose from the sleep demon Batibat for Sabrina to realize something is up.

After Sabrina confronts her in Episode 6, Ms. Wardwell admits that she's a witch. She claims Sabrina's father, Edward, asked her to protect his daughter before he died, and says that when Edward was the High Priest of the Church of Night, she was his acolyte. None of this is true since Madam Satan already made her disdain for Edward Spellman clear in the first episode, but Sabrina and her aunts don't know that. So even though Sabrina is angry with Ms. Wardwell for lying to her, she gives the teacher a second chance.

For the rest of the season, Sabrina turns to Ms. Wardwell as a dark magic mentor, not realizing that she's just trying to manipulate her into signing away her freedom to Satan. But Ms. Wardwell's evil always shows through to viewers, like when she reveals to Sabrina and the Weird Sisters that Harvey is descendent from witch hunters and when she abandons Sabrina in limbo. To fully break Sabrina's ties to the mortal world, Ms. Wardwell calls upon the Greendale 13 to bring the Red Angel of Death and murder every first-born in town. She then convinces Sabrina that signing the Book of the Beast is the only way to save her loved ones. This leads Sabrina to leave her mortal life behind and focus on being a witch — just as Satan wanted.

Sabrina never realizes that Ms. Wardwell is working for Satan, which will likely mean even more trouble for her in Season 2. But viewers should have no doubt about just how bad the spirit that resides in Ms. Wardwell's body is: She makes her intentions clear to a captured Principal Hawthorne in the Season 1 finale. When the Baxter High principal asks Ms. Wardwell who she is, she replies:

"Who am I? Well, I'm not Mary Wardwell though I do enjoy her body. I'm the Mother of Demons, the Dawn of Doom, Satan's concubine. I'm Lilith, dear boy. First wife to Adam, saved from despair by a fallen angel. I call myself Madam Satan in his honor. But soon, very soon I'll have a new title. You see once I finish grooming Sabrina to take my place as Satan's foot soldier. I'll earn a crown and a throne by his side. Who am I? I'm the future Queen of Hell."

She then peels off her face to reveal her true, horrifying form and eats him.

If that wasn't evil enough, she also turns on her familiar, Stolas. When the bird suggests that Satan could be grooming Sabrina, not her, to rule by his side, she instantly snaps its neck. Because nothing will stop Madam Satan from becoming the Queen of Hell — especially not a half-mortal like Sabrina.

Ms. Wardwell may serve Satan, but her number one allegiance is to herself, and if/when the Dark Lord does want Sabrina to be his queen, Wardwell will undoubtedly try to kill Sabrina first. But Madam Satan's lust for power may prove to be her undoing since she should know better than anyone that you don't go against the will of Satan. So, if Sabrina can't stop her possessed teacher in future installments of Chilling Adventures, the devil surely will.