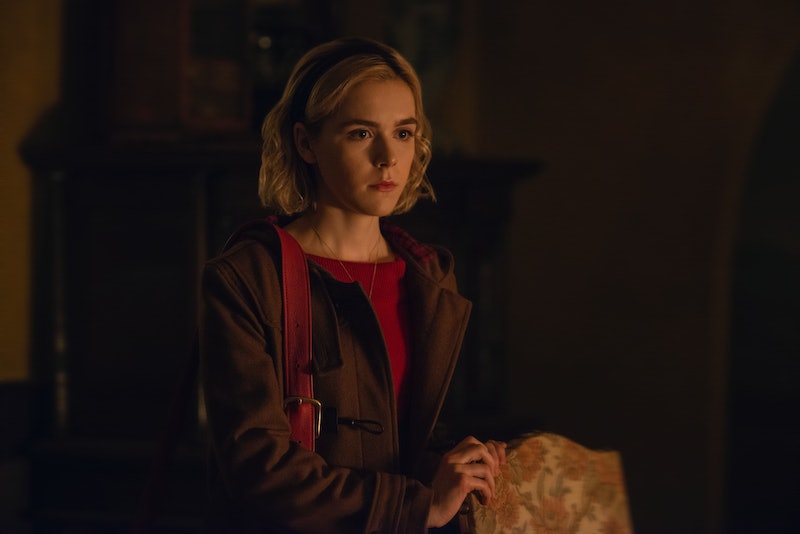 Gather 'round, witches. Netflix just released a ton of photos of the Chilling Adventures of Sabrina characters, giving fans a major glimpse at all of Sabrina's friends, family, and foes. There's an official description for each character, too — including one for Sabrina Spellman herself — and they make it pretty clear who fans can expect to be on Team Night and Team Light.

According to showrunner Roberto Aguirre-Sacasa, the first season of the new Sabrina series will be "following [Sabrina's] dark education," as he told Entertainment Weekly. "It’s all part of a bigger arc, which is her trying to hold on to her humanity as her witch nature is developed." Basically, the teenage witch will be forced to choose between The Path of Light — which would require that she give up her immortal half life for a regular life — and The Path of Night — which involves joining a coven overseen by satan. Very chill, no pressure. Oh, and she has to make this decision by the time she turns 16.

The Chilling Adventures of Sabrina is going to be a dark, wild ride for Sabrina and company — no doubt about that. Check out the who's who of the new, dark series in the character roll-call below.

More like this
Ashton Kutcher Wants Danny Masterson “To Be Found Innocent” In Rape Retrial
By Jake Viswanath
At 28, Debra Jo Rupp Was Living A Much Different '70s Show
By Grace Wehniainen
Here’s Why Danny Masterson’s Hyde Isn’t In 'That '90s Show'
By Brad Witter
Netflix Shut Down 'Bridgerton' S3 Rumours About A “Very Dark” Storyline
By Bustle
Get Even More From Bustle — Sign Up For The Newsletter
From hair trends to relationship advice, our daily newsletter has everything you need to sound like a person who’s on TikTok, even if you aren’t.