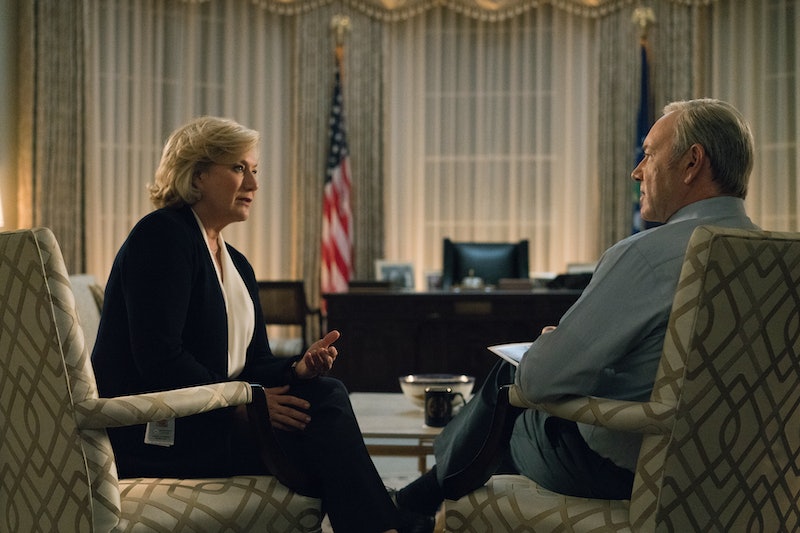 In House of Cards Season 5, terror is the name of a very political game. ICO, the fictional terrorist organization that was last seen beheading an American citizen uses terror to try to control the United State — and President Frank Underwood does the same. (Spoiler alert for Season 5 of House Of Cards!) One alleged terrorist whose name pops up early in the new season, Muhammed Kalabi, ends up being a pawn in Frank's larger plan to derail the election. But did an incident like the one that puts him in custody really happen? Considering that ISIS, the organization that ICO resembles, is regarded as a significant threat in the real world, it's entirely possible that Muhammed Kalabi is based on a real person.

While Kalabi himself has no confirmed terrorist associations on the show, the character manages to get stuck in the middle of a conspiracy from the highest rings of government, and becomes the fall guy for President Underwood's rigging of the Presidential Election. When being briefed on Kalabi, Frank is told that the young Syrian "recently got to America from Afghanistan through way of Canada" and is "visiting his girlfriend in Tennessee, who works at a Knoxville bookstore." Kalabi has just enough red flags that he's a believable target for those looking to comfortably blame someone after an attack on a Knoxville polling station. Frank is acting without precedent when he, as president, allows a polling station to be attacked and let people suspect Kalabi, an innocent Syrian, of terrorism. But has anyone in real life been similarly blamed and eventually detained for an attack that wasn't their doing?

Kalabi's scapegoating is tragically reminiscent of how many people of Arab descent are treated in post-9/11 America. On the 10-year anniversary of the event, NBC News reported that since Sept. 11, 2001, there have been "2,934 arrests and 2,568 convictions in the United States" related to acts of terror. Before that date, the global arrests for terrorism numbered in the hundreds, not the hundred thousands. And the study doesn't even include the six years since that anniversary date that have involved frequent conflict with ISIS. Heightened awareness can cut off threats at the root, but it can also lead to racial profiling and false arrests.

"Originally the approach was the more the merrier, the stronger counter-terror laws, the better for the security of the world. But that was a serious mistake," U.N. special rapporteur on human rights and counter-terrorism Martin Sheinin told NBC News in the same piece. "Nowadays people are realizing the abuse and even the actual use of counterterror laws is bad for human rights and also bad for actually stopping terrorism."

While no United States president has attempted to frame a post-9/11 terrorist attack on an innocent individual — at least House Of Cards is unbelievable in that sense — fear and the 24-hour news cycle has led to people being unfairly vilified in the press. After the 2017 Quebec mosque shooting, Fox News tweeted that a Moroccan man had been detained as a suspect, despite Canadian police having released and cleared Mohamed Belkhadir a few hours after he was taken in. The tweet stayed up for two days.

Following the 2013 Boston Marathon bombing, amateur detectives on Reddit attempted to find out who committed the attack and shifted the blame to the missing Sunil Tripathi who was not only completely innocent, but also deceased, according to The New York Times. It seems people are more willing than ever to put a face on terror as soon as possible rather than wait for more information — and that's exactly what Frank was counting on.

Frank has openly admitted to the audience that he intends to use terror to his advantage. In Season 5, the president is using America's worst instincts against them to gain power more power – and Muhammed Kalabi is caught in the middle of it, just as real innocent people get caught up in the world of spin and misinformation when real and suspected terrorist acts are involved.

Kalabi may not be directly based on a real human being, but the similarities of his situation to others shows that Frank Underwood's America isn't all that different from the real one.

More like this
How A Political Staffer’s Death Became The Center Of Alt-Right Conspiracy Theories
By Gretchen Smail
Eurovision 2023 *Might* Be Held In The UK
By Sam Ramsden and Rachel Mantock
Where Is Oscar Torres In 'Only Murders In The Building' Season 2?
By El Hunt
The “Beatrice Six” Were Awarded $28 Million After Their Wrongful Convictions
By Brad Witter
Get Even More From Bustle — Sign Up For The Newsletter