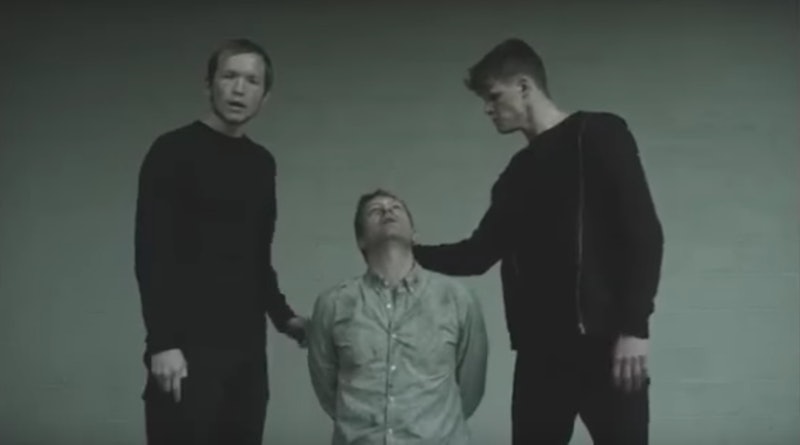 As President Frank Underwood and company gear up to continue their radical rule over the White House when House of Cards Season 5 returns to Netflix on May 30, fans have most likely been eager to learn more about Joshua Masterson, one of the men responsible for the kidnapping and torture of an innocent family. Although Joshua Masterson isn't a real person, not specifically, his story is not an unfamiliar one.

It's worth noting that the character's background is similar to that of many stories that have been heard about college students being recruited for extremist organizations such as ISIS. It's highly likely that the House of Cards showrunners may have used some these stories as building blocks for Masterson's character, who is played by actor Jefferson White. And this would not be House of Cards first foray into political realism. The show has touched on many other haunting details that have felt all too real for fans, including the introduction of the terrifying ICO leader, Yusuf Al Ahmadi, to the striking similarities between the series' Russian president, Viktor Petrov, to real-life Russian leader, Vladimir Putin.

In the Season 4 finale of House of Cards, fans see Masterson, an American citizen and member of the ICO (which bears many similarities to ISIS), take an unassuming family of three captive. The domestic kidnapping is an effort to make the Underwoods meet the ICO's demands of speaking to their leader, Ahmadi, whom the United States has been holding in its custody. Masterson would later end up slitting the throat of one of the hostages when Underwood refused to release Ahmadi while America looked on.

The hostage crisis, no doubt, became the center of attention for the president and his staff towards the season's end. It remains to be seen just how the Underwoods will use the hostage crisis as a way to claw their way back into favorable ratings for the upcoming presidential election. But just know that they will take any and all measures necessary to ensure that they win.

So, while there's no evidence that Masterson is based on a specific real person, his story is uncomfortably true to life.

More like this
'The Undeclared War' Spotlights The Real-Life Threat Of Cyber Attacks
By Maxine Harrison
'Stranger Things' Star David Harbour Has This Actor In Mind For A Hopper Spinoff
By Alyssa Lapid
Natalia Dyer Opened Up About Steve & Nancy’s “Lovely” ‘Stranger Things’ 4 Dynamic
By Grace Wehniainen
Yes, Joseph Quinn Is Actually Playing The Guitar In This Epic 'Stranger Things' Scene
By Alyssa Lapid
Get Even More From Bustle — Sign Up For The Newsletter