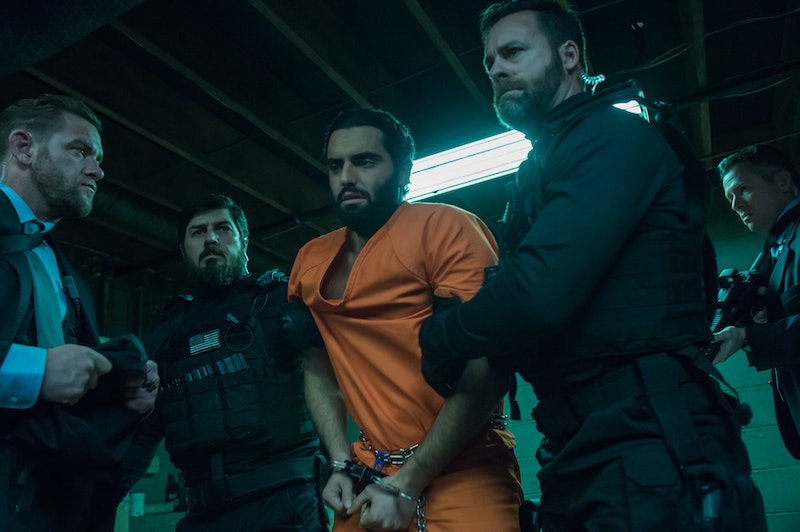 House of Cards has never held back when it comes to drawing on real world politics for inspiration, but the show took their philosophy to new heights with the introduction of ICO in Season 4. The terrorist organization felt all too real, and what ICO did in House of Cards Season 4 was nothing short of game-changing for the Underwoods. Frank and Claire know how to deal with politicians, but their first encounters with extremists do not go as planned.

ICO, which stands for Islamic Caliphate Organization, occupies Kurdish strongholds and, when they are introduced, it's revealed they are taking over oil fields in Syria. The threat they pose to the world only grows from there. In the show, they are described as a Muslim extremist terrorist organization, and they are a caliphate. That means they operate as an Islamic state led by a powerful caliph — a religious and political leader said to be the successor of the prophet Mohammed.

It's revealed ICO's leader, Yusuf Al Ahmadi, is being held in Guantanamo Bay, and his people want him returned. In order to force the United States to return Al Ahmadi, several ICO members take an innocent family of three, the Millers, hostage. Additionally, the group makes it clear they want to feel in control by insisting on speaking only with the Republican presidential nominee, Will Conway. As the actual President of the United States, Frank is not happy with this arrangement.

In hopes of saving the Millers and preserving Frank's power in the eyes of the American public, Claire has Al Ahmadi moved to a safe house in Virginia. Once he arrives, she meets with him and seemingly convinces him to have his people release the Millers unharmed. Unfortunately, once Al Ahmadi is given access to his followers, he gives them his full support, which in turn leads to the tragic execution of Jim Miller.

Season 4 ends with Frank declaring, "We don't submit to terror. We make the terror." With a potential war looming, Season 5 is sure to feature a whole lot more of the ICO, as the full extent of the influence the terror organization's horrifying acts has on the upcoming election is explored. The ICO is set to further complicate the choice facing the U.S. as the public is now tasked with deciding not only who will lead America, but who will lead America into this new war — Frank or Conway.