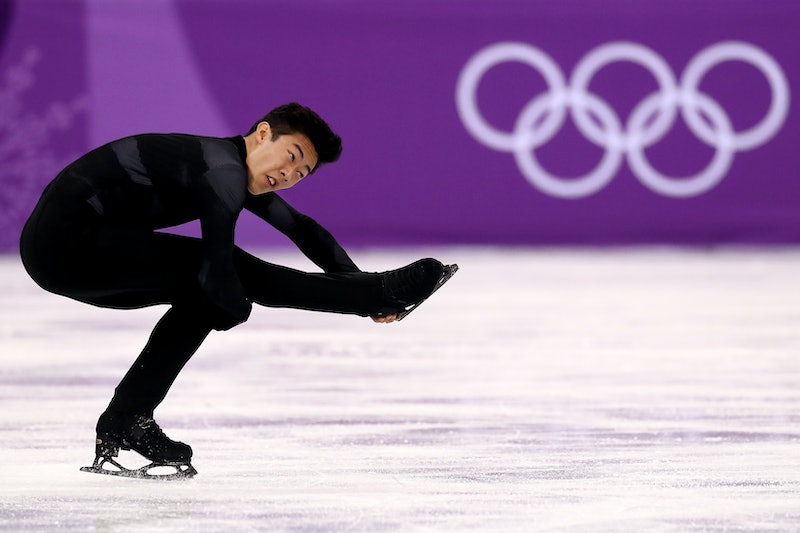 Though it was tough to spot Nathan Chen at the Olympic opening ceremony, an Instagram post from fellow Team USA member Madison Chock showed Chen in high spirits, despite having a pretty tough morning leading up to the ceremony. Chen made his Olympic debut a few hours before the ceremony, and it culminated in an unfortunate fall. Despite a rough start to his Olympic career, that didn't deter Chen from celebrating with all of Team USA at the opening ceremony.

The 18-year-old is one of 14 athletes representing the United States at the Pyeongchang Olympics in the sport of figure skating, and celebrating the opening ceremony with them may be exactly what Chen needs to push past his debut and excel during the rest of the competition. Leading up to the ceremony, he snagged a pic with fellow skater Madison Chock, who is competing in ice dance alongside skater Evan Bates. While Chock is competing in dance and Chen is gliding the ice solo, their pic together proves that a Team USA that skates together is a Team USA that stays together. Chen may have had a bumpy start, but there's no better morale booster than a good team to move past a small slip-up.

Leading up to the 2018 Olympics, The New York Times stated that Chen was a "a shoo-in for the United States Olympic team." His reputation as a world-class skater — Chen is known for being the first person ever to complete five quadruple jumps in a single routine — is the reason his Olympic debut was so hotly anticipated, and the reason that his fall during that same debut was such a surprise. ESPN even ran a massive feature on Chen saying that he could "take the sport to new heights at the Olympics." It's safe to say that when it comes to Team USA's figure skating roster, all eyes are on Chen.

While Chen may be the only member of Team USA's figure skaters that happens to be on a Corn Flakes box, the entire team showed up together for the opening ceremony. After what has been a highly publicized early performance by Chen, his team coming together is a perfect reminder to Chen and the world that although he may be skating alone, he's supported by all of America and his many teammates who are joining him in Pyeongchang. Chen revealed to the Salt Lake Tribune that "ultimately, [competing in the Olympics] is the dream that [he has] wanted for a long, long time.” While that dream may have hit a slight road bump in Chen's first Olympic routine, it's still very much alive.

"I really strived toward [it] my whole life," he told the Associated Press. "I’ve always wanted to know what it feels like to be on that Olympic team."

Nathan Chen could've sat out the opening ceremony. He could've gotten some extra training in, could've analyzed what went wrong in his performance earlier that day — but the fact that he showed up to the opening ceremony proves that while hard work is important, it's not the only thing needed to succeed. Sometimes, the best thing that someone can do for themselves is spend time with their friends and like-minded individuals and appreciate just how far they've come. After all, what kind of dream would the Olympics be if Chen had missed the opening ceremony? The skater is making the most out of his first-ever Winter Olympics and, judging from the smile in Madison Chock's Instagram, he isn't letting anything get him down. Hopefully, that attitude will serve him well now that the games have officially begun.