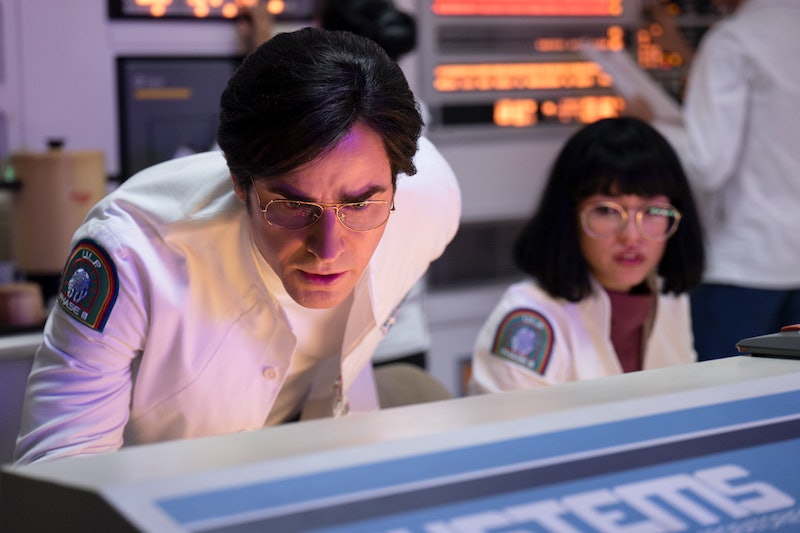 The shady medical trial at the heart of Netflix's new miniseries, Maniac, makes some lofty (and troubling) promises, billing itself as a miracle cure for pretty much every mental ailment under the sun. Luckily, no one is actually trying to sell the risky, fix-all pills it's testing; rest assured, Neberdine Pharmaceutical and Biotech is not a real company. But the concept should nevertheless feel pretty familiar to sci-fi fans.

Neberdine's quirky, VHS-style advertising may feel ripped right from the '80s, but it's actually just one in a long line of shadowy fictional organizations seen onscreen. And if it follows all the companies that came before it, it won't take long before the curtain is pulled back to reveal some ulterior motive, proving that yes, they were the bad guys all along. In fact, it would be a surprise if Neberdine Pharmaceutical and Biotech weren't secretly evil.

There are plenty of things about Neberdine that should raise a red flag for Annie (Emma Stone) and Owen (Jonah Hill), two participants in the trial who serve as the backbone of the show. But viewers, too, should see plenty of clues that Neberdine is up to no good: Namely, that it bears a striking resemblance to many other nefarious, fictional companies. Here's just a few.

The DHARMA Initiative from Lost

Neberdine's retro stylings and mysterious motives act as a strong parallel to Lost's Dharma Initiative. The organization conducted a variety of experiments throughout the ABC series' six-season run: toying with electromagnetic energy, breeding polar bears to survive in the heat of a tropical island. Lost also frequently blurred the bounds of reality — hopping between multiple timelines — which is another thing that it has in common with Maniac.

The Dyad Institute from Orphan Black

The Dyad Institute, responsible for the existence of the many clones that make up most of the cast of Orphan Black, most closely resembles Neberdine, as its primary focus is biotechnology. Dyad is dedicated to improving the human body, and Neberdine's clinical trial to create a pill that can fix all mind-related issues in three days seems to be an attempt to reach the same goal.

Perhaps the most high-profile evil organization on TV right now is Delos Incorporated, the company behind the amusement parks of Westworld. Think all they're doing is providing a fantastical escape to eras past? Well, you might want to think again: Delos is using their parks as a front for far more nefarious purposes.

With that much history behind it, don't be surprised if Neberdine's end goal turns out to be much more sinister than Dr. Mantleray — played by the deceptively charming Justin Theroux — lets on. An internet deep dive doesn't seem to turn up any confirmation that Neberdine is directly related to, or even based off of, any existing company, but let's just say that if Annie and Owen had watched more television, they probably never would have signed up for that trial.

More like this
‘Squid Game’ Creator Hwang Dong-Hyuk Just Dropped A Major Season 2 Tease
By Brian Anthony Hernandez and Bustle Editors
'It’s A Sin's Real-Life Jill Has An Important Message About Monkeypox
By Sam Ramsden
'Stranger Things' Season 5 Will Echo Season 1 In A Key Way, The Duffer Brothers Confirm
By Kadin Burnett and Sophie McEvoy
What's New On Netflix: A Third '365 Days' Movie & Lili Reinhart’s New Film
By Arya Roshanian
Get Even More From Bustle — Sign Up For The Newsletter