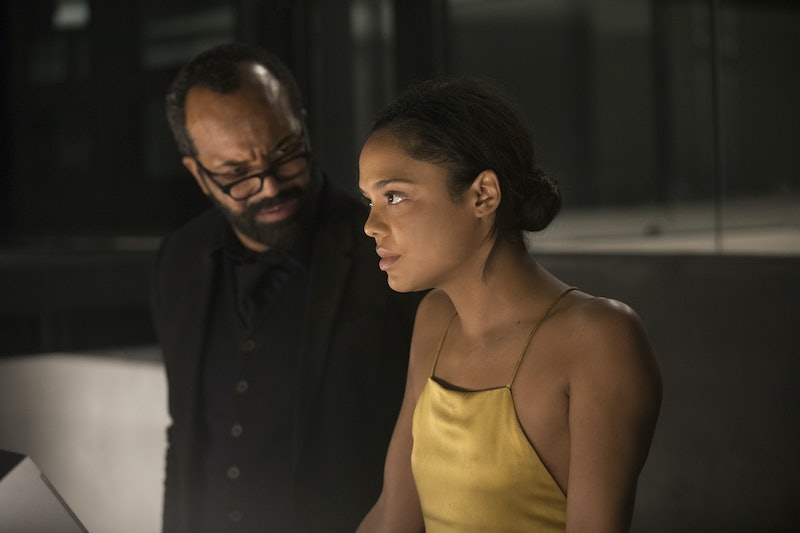 Spoilers for the Westworld Season 1 premiere. Data mining is a hot topic in 2018, and unsurprisingly Westworld has found a way to take that corporate activity to new and terrifying heights in Season 2. Not only are the theme park's suits keeping records of guest's experiences — which gives them the ability to blackmail the rich and powerful at their most debaucherous — but they're also keeping part of the guests themselves. What is Delos doing with DNA on Westworld? Hold on to your black hats, because this could get ugly.

As fans discovered way back in 2016, the Westworld terms and conditions reveal a lot about what the guests are signing over, what is and what is not allowed, and what Delos could really be up to while everyone is palling around with robot cowboys and robot shoguns and robot... whatever's in the other parks besides Bengal tigers. Here's what one of the conditions, buried between text about disclosing personal information to legal authorities, not taking selfies, pitching ideas for host storylines, and whether or not someone once died by tumbleweed, says about DNA collection:

"By entering the Delos Destinations Port of Entry, you acknowledge that Delos, Inc. controls the rights to and remains the sole owner of, in perpetuity: all skin cells, bodily fluids, secretions, excretions, hair samples, saliva, sweat, blood, and any other bodily functions not listed here. Delos, Inc. reserves the right to use this property in any way, shape, or form in which the entity sees fit."

In the premiere episode of Season 2, Bernard seems surprised to learn from Charlotte that Delos is doing this — though, as he is both staff and a host himself, there's really no reason for him to have ever discovered this information. The question, remains, however... why?

So many possibilities, each one more terrifying than the last. Are they planning on cloning guests? Surely an advanced version of that technology exists in this fictional world. Even if it doesn't, these guests are freely providing plenty of experimental materials in order to develop it.

Better yet, they could turn a guest into a host using their DNA for accuracy and what could pass for "proof" in the real world. The hosts are largely made out of organic material. They're more android than robot, to use a science fiction term. Imagine this: a guest dies (or is killed) in a Delos park, gets "resurrected" so to speak as a host, and sent out into the real world to do Delos' bidding. This corporation could have literal puppet governments set up all over the world if they wanted.

Reddit user eneskristo theorized on the site that this has already happened to a character we know, and that the Man in Black is actually a host created from William's DNA. The maze wasn't for him, as Ford did not intend for him to discover he is a robot and achieve self-actualization, but the "door" that would allow him to escape the park and live in the real world with real stakes.

Another theory floating around the internet is that Delos is planning to overrun the real world with host duplicates of real people — but there is a major flaw in that theory. While sympathetic creatives like Arnold and Ford would find this "beep shall inherit" theory appealing, what good would that do Charlotte Hale and the folks at Delos? They're after control, not a lack thereof.

Charlotte doesn't have time for Bernard's questions in the premiere, which makes a modicum of sense. Not only is the park being rampaged by sentient and empowered hosts, but Charlotte's secret mission to smuggle data out of the park has also gone awry due to the escape of Dolores' "father" Abernathy. Still, this new information isn't something to ignore on Westworld. Whatever Delos is doing with DNA could foreshadow future twists, or at least provide insight into this world as it crumbles.