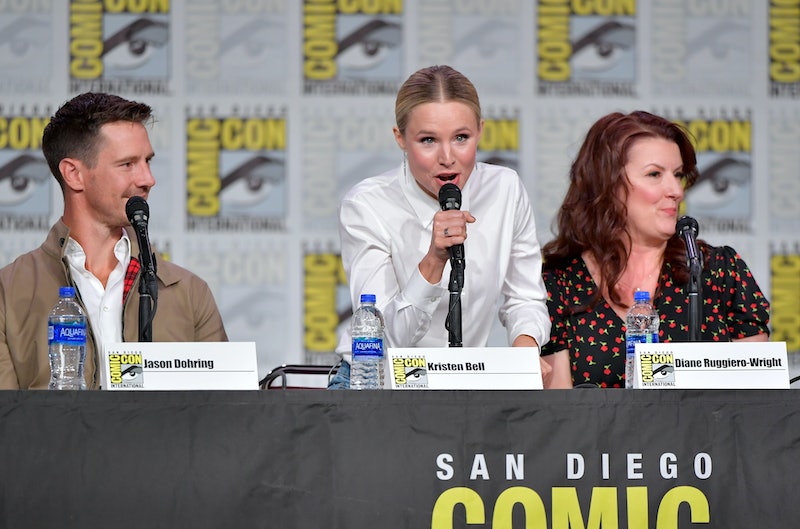 When getting invested in a gripping TV show, it can prove difficult to discern the real from the fictional settings. After 7 seasons experiencing Leslie Knope's Pawnee pride in Parks and Recreation or reveling in the beloved busybody nature of Stars Hollow, Connecticut in Gilmore Girls, viewers are prone to an expertly-crafted town. But when one asks if Veronica Mars' Neptune, California is a real place, it may be tricker to answer than you thought.

While some TV towns are clearly fictional, a la Hawkins, Indiana in Stranger Things or others are harder to pin down. For instance, viewers may know that the Upper East Side is a real place, but Gossip Girl certainly bends the believability factor of the hyper-sensationalized neighborhood. On the heels of Veronica Mars Season 4 being released a week early on Hulu, let's revisit the seaside town, ripe for scandalous crime-solving.

Sorry to disappoint, enthusiastic tourists, you can't actually book a flight to Neptune, as it is a fictionalized town. However, if it looks and feels like it could be found on a map, that's because creator Rob Thomas actually based Neptune on Orange County. In a now-removed interview on Ain't It Cool News, Thomas said that Neptune was located near San Juan Capistrano, which is located in California's Orange County. Although, much of the show's original three seasons were filmed in San Diego, it's based on the ultra-affluent OC, showcased in other shows, including Real Housewives of Orange County and The OC.

The show has implied that Neptune is about 85 miles (or a 90-minute drive) from San Diego, which falls directly into Orange County territory. Located between bustling San Diego and Los Angeles, the county marks a very wealthy area. Marshmallows will even remember that much is made on the show about the zip code 90909. Affluent residents of Neptune are even referred to as "09ers."

Another key phrase that will lead fans to Orange County as Neptune's real-life inspo? Balboa. Veronica Mars takes place in the fictional Balboa County. In reality, the OC claims Balboa Island, while Newport Beach is geographically located on Balboa Peninsula. So, once again, Thomas took some Golden State clues when constructing his fictional locale. But if this is all starting to sound like a Saturday Night Live Californians sketch, don't worry. Like the scene of any juicy crime show, there is plenty of room for corruption amongst the geographic details.

The show itself often balanced a dark, neo-noir tone of crime and intrigue along with a cast of teenage characters and love triangles. So, the fictional Neptune High provided the perfect playground to pair the two. Mars's high school was yet another depiction of how the 09ers were separated from the rest of the school, held up as popular because of their wealth and prominence. Reality shows Laguna Beach and The Hills also explored these themes using a California backdrop in the years after Veronica Mars left the air.

Unlike a show such as Gilmore Girls, which infused realism to Stars Hollow when Rory went off to Yale, Veronica attends the fictional Hearst College come Season 3. However, scenes were actually filmed on real college campuses, including University of San Diego and San Diego State University.

Any true Marshmallow knows that it's the blending of real-world elements and fictionalized storytelling that made Neptune, California the perfect scene for Veronica's crime-solving.