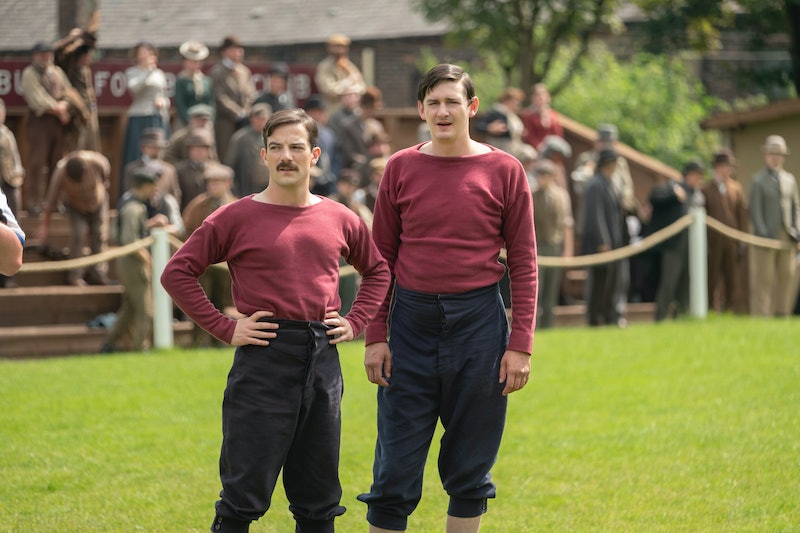 With football grinding to a halt due to the COVID-19 pandemic, Netflix is here to bridge the gap in our lives with a new series about the birth of the beautiful game. Developed and written by king of the period drama Julian Fellowes (the man behind Downton Abbey), this six-part series has just landed on the streaming service, but is The English Game based on a true story?

The English Game follows the story of Fergus Suter, a real-life figure born in 1857 in. Suter (who is played by Fantastic Beasts: The Crimes of Grindelwald star Kevin Guthrie in this series) worked as a stonemason while playing amateur football for local team Partick. In 1878, Suter moved to England to play for Lancashire side Darwen with fellow Scot Jimmy Live (played by James Harkness). He later played for the Blackburn Rovers.

Suter is considered to be the first ever professional footballer as he was the first person to be paid for his time on the field. And it was this that made him the subject of much criticism during his lifetime. In the 19th Century, football was seen as a gentleman's game played by amateurs; to be paid for it was considered unseemly.

On the other side of the class divide was Arthur Kinnaird (Edward Holcroft), and his team, the Old Etonians. The son of a Lord, Kinnaird held the position of President of the Football Association in for 33 years. The real-life rivalry between Kinnaird and Suter and their respective teams forms the basis for much of the drama in The English Game.

(Spoilers ahead). However, while the show is based on a true story, there are, of course, a few instances of artistic licence sprinkled throughout the series. For example, The English Game incorrectly shows Suter's team beating the Old Etonians at the 1883 FA Cup. In reality, the Blackburn Rovers lost in 1882 and Suter did not play in 1883, when a different Blackburn team (the Blackburn Olympic) beat the Old Etonians.

At the centre of The English Game is a love triangle between Suter, Martha Almond (Niamh Walsh) and Blackburn Rovers' chairman John Cartwright (Ben Batt). This drama compromises one of the most interesting parts of the show, with Cartwright illegitimately fathering Almond’s child. However, a little disappointingly, it seems like this plotline is not based in truth. The Daily Mail reports that there is no proof of a romantic entanglement between the three, although Suter and Almond did marry in 1883.

“She’s a real person,” Walsh confirmed to the Radio Times, speaking about her character. “[But] she exists in historical records only as a name. Because of the historical records, we know much less about the women than we do about the men – but happily, not in this show.”

The English Game is available to stream on Netflix now.

More like this
All The Ways You Can Watch The Super Bowl In The UK
By Asyia Iftikhar and Darshita Goyal
David Beckham’s Controversial Qatar Deal Skyrocketed His Net Worth
By Catharina Cheung
Gerard Butler Insisted On Adding This Pivotal Scene To 'Plane'
By Catharina Cheung
Jemima Khan Used Her Own Life As Inspo For 'What’s Love Got To Do With It?'
By Darshita Goyal
Get The Very Best Of Bustle/UK
Sign up for Bustle UK's twice-weekly newsletter, featuring the latest must-watch TV, moving personal stories, and expert advice on the hottest viral buys.