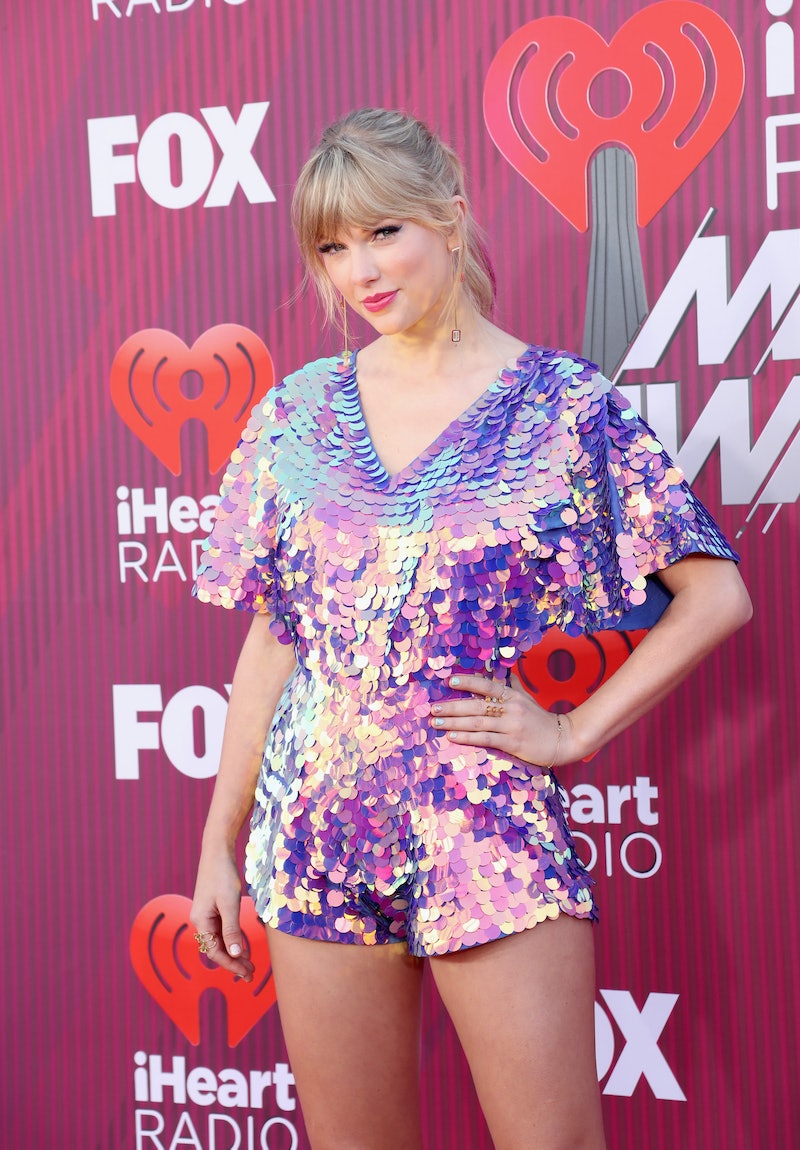 Tick tock, tick tock... The time has come: Taylor Swift countdown clocks appeared on the web — and on billboards around the world — at midnight on April 13, pretty much confirming new music is but days away. Also swapping her social media photos to a cloudy pastel-colored sky, Swift's bios now also include the date "4.26." And if those weren't enough clues to make your Swift-shaped hearts race, hours later, the singer also uploaded a mysterious Instagram photo of a diamond-encrusted heart, also writing "4.26."

The significance of Swift, again, leaning into the number 13 was not lost on her Swifties. She posted the tease on the 13th, and, of course, April 26 is — no surprise — 13 days away. The Grammy winner was born on December 13, turned 13 years old on Friday the 13th, and her first album went gold in 13 weeks. "Basically whenever a 13 comes up in my life, it's a good thing," she told MTV in 2009. And now she seems to sharing the wealth of good things with her fans as well.

While accepting the iHeartRadio Music Award for tour of the year on March 14, Swift publicly mentioned the possibility of new music following her most recent album release, November 2017's reputation. As she told the audience: “I love your passion, I love your attention to detail, I love how much you care. I love seeing all the things you’re posting online. I just wanted to let you know that when there is new music, you will be the first to know.”

When the singer mentioned fans' "attention to detail," she wasn't kidding. After Swift posted a palm tree-filled image with stars plastered across the sky (and included only palm trees in the caption) back in February, her followers began their CIA-level detective work. Twitter users @annaandmitch even predicted — months ago — that April 26 would be the day she blessed their ears with music. How? Let them explain:

"Crazy #TS7 Theory: So if there’s 60 stars as some have said, let’s say there’s about 60/61 There’s 61 days until April 26, FRIDAY, a SINGLE RELEASE day! Another connection is April 26 is Arbor Day, a connection to PALM TREES!? @taylorswift13 look what your doing to us"

Now that the prospect of new music seems even more definitive, fans naturally have lots of thoughts — and can barely contain their excitement. Many even drew a hilarious connection to another highly anticipated April 26 release: Marvel's Avengers: Endgame, of course. As Twitter user @courtneypochin joked, "Can you believe @taylorswift13 is really going to save the universe from Thanos???? #TaylorSwiftApril26"

Other fans, like @Joons_euphoria, tweeted that even if Swift isn't going to save the universe, she's definitely about to save the music industry, and, no, this is not a drill.

The mystery diamond heart Swift posted also fueled many theories — some more comedic than others. "Is @taylorswift13 finally telling us she is a psychic and a mind reader and these are crystals she uses to know exactly what to write in each song to make it feel like it was written for you? @taylornation13 I think so," wrote @daredutokissme1.

Indeed, many fans are already looking to the future. As @_rayputation tweeted, "Your new favorite @taylorswift13 song has already been recorded That new lyric that will perfectly say what's in your heart has already been written The new bop you'll to dance around your room to already exists The wait is over. TS7 is here #TaylorSwiftApril26 @taylornation13"

While April 26 will, in all likelihood, bring about new Swift music, whether or not that's what she has in store, fans are clearly ready for it.