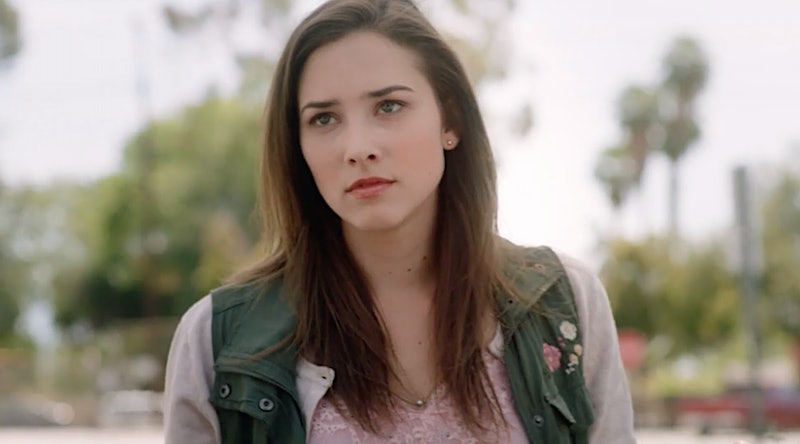 The holiday season may be coming to a close, but you can always count on new Lifetime Original movies to help keep you merry all year round. The latest film gearing up to make its big debut on the network will prove to be no exception. Titled Nightmare Best Friend, the story centers around two high school friends, Katy and Gina, whose initially fun reunion turns into a total nightmare (hence the title). But is Nightmare Best Friend based on a true story? It certainly raises the bar on what it means to be a frenemy.

It all starts when Gina shows up on Katy's doorstep for what appears to be a simple impromptu visit, however, when Gina's boyfriend shows up, it becomes clear that Gina's desire to reconnect with her former bestie comes with some sinister intentions. She wants Katy to help them rob her workplace and they're willing to do anything necessary to convince her to do what they say — even if it means threatening her family.

It's a scary scenario to be faced with, to say the least, but it is based on any real life events or a complete work of fiction? You'll be happy to know that this movie was created for entertainment purposes only.

High school reunions can seem terrifying at times, sure, but usually not because one of your BFFs from way back when it trying to get you to rob some place and making threats against you and those you love most. But that's all part of why we love watching these Lifetime movies in the first place: for the outlandish storylines that are just as ridiculous as they are downright addictive to watch.

To help get a better since of the overall plot, be sure to check out the official synopsis of Nightmare Best Friend as shown below:

"When Katy's high school friend, Gina, shows up on her doorstep, Katy is overjoyed to reconnect with her old bestie and reminisce about their past adventures. But, when Gina's boyfriend, Ray, shows up, it turns out that the surprise reunion wasn't so impromptu after all — the couple wants Katy to help them rob her workplace and are willing to go to any means necessary to ensure her help including holding her family hostage."

So what ends up happening to Katy? Does she really end up following through with the robbery or do Gina and Ray get caught in their own scheme? Are Katy's family able to make it out of this situation unscathed? Interested viewers will have to tune in when the movie premieres on Saturday, Dec. 29 at 8 p.m. ET on Lifetime Movies in order to see how it all plays out, but given the many of the films that have come before, it's sure to have an ending you won't soon forget.

So grab a bowl of popcorn, some leftover Christmas eggnog, and your closest frenemy and settle in for a night of good old fashion drama — and be thankful that it's all entirely fictional.