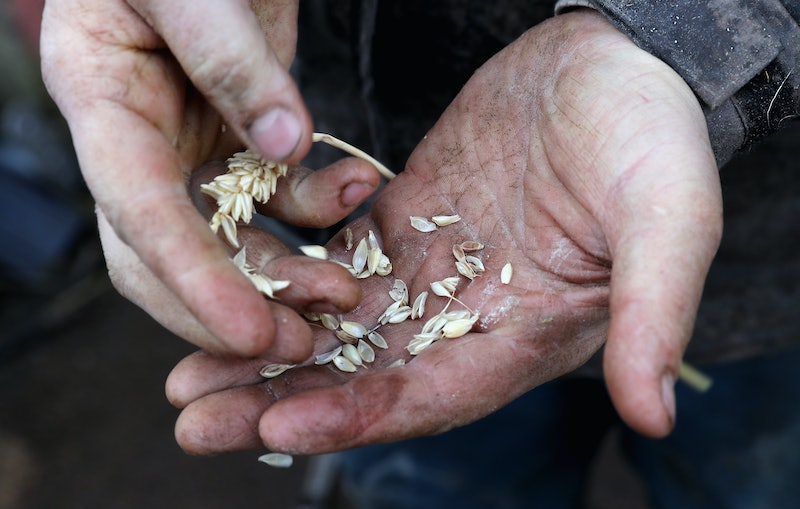 There are plenty of reasons folks drink plant-based milk substitutes, from having dairy-related allergies, to avoiding dairy milk as part of a vegetarian or vegan diet, to just plain ol' liking the way plant-based milks taste. Plant-based milks also generally have good nutritional value, making them a healthy alternative to dairy milk. As more and more people become concerned about the sustainability of our various food- and drink-producing industries, you may have wondered if plant-based milks like oat milk are environmentally friendly, compared with dairy milk. And friend, there's good news for you.

According to an investigation by nonprofit environmentalism magazine Grist, the traditional dairy industry has a significant impact on the Earth. That impact comes from a combination of processes associated with milk production, including the massive amount of grain needed to feed the world's dairy cows, the energy needed to turn raw milk into consumer products, packaging materials, and the methane output from cows. "Here in the U.S., your daily glass of milk accounts for 2 percent of our countrywide [greenhouse gas] emissions," Grist reported. "[I]n fact, one gallon of the white stuff is the equivalent of 17.6 pounds of carbon dioxide."(For context, according to Terrapass, a company that sells carbon offsets, the average American citizen produces about 3,000 pounds of carbon dioxide emissions per month.)

Grist also noted, however, that "alternative milks require lots of processing, and their primary ingredients may travel great distances to reach your refrigerator — whereas theoretically, you could buy a minimally processed gallon from a cow raised humanely right down the road." Despite this, Grist asserted that overall, the production of plant-based milks causes less ecological damage than the production of dairy milks.

When it comes to oat milk specifically, it may be surprising to find out that oat milk has been around for a while, despite it just recently becoming a trend in coffee shops in the U.S. In fact, oat milk manufacturer Oatly launched in Sweden 25 years ago, according to Mic. Bratskeir also noted that plant-based milks can take a hefty amount of processing power, so "plant-based doesn't necessarily equate with eco-conscious."

Oatly, though, was founded "to provide a more sustainable option that's gentler on the planet compared to traditional dairy milk." To help bolster its mission, Oatly teamed up with local partners to send used oat kernel hulls to farms and biogas facilities instead of into landfills, Bratskeir reported, adding that in the U.S., Oatly's production waste is "used as a part of fertilizer growth and animal feed."

And oat milk does appear to have less of a carbon footprint than some other plant-based milks. The New York Times reported that according to the Water Footprint Network, almonds require six times as much water to grow than oats do. Growing soybeans, for soy milk and other purposes, can have tremendously damaging effects on the ecosystems where they're introduced, according to the World Wildlife Foundation. Emily Cassidy writing for PlanetVision also noted the strain almond milk can have on our water, and mentioned that packaging can still leave a footprint on the environment even if the milk inside is having less of an impact than dairy milk — so if you decide to stock up on oat milk knowing that it's got less of a footprint than almond milk, double-check to be sure the packaging is sustainably made and recyclable.

It's also useful to check up on the producers of oat milk, or any plant-based milk you choose to buy, particularly if you're buying for sustainability reasons. Oatly makes use of its production waste, but there may be plant-based milk producers that don't. Checking on a brand's website to see if the company address the question of sustainability is a good start, since even if oat milk overall has less impact than dairy milk, specific practices can vary from brand to brand.

Judging by the frothing (sorry not sorry) attention oat milk is getting for its usability at coffee shops and its overall sweet taste and benefits, you can expect it to stick around for a while. And it looks like the Earth may benefit from that, too.