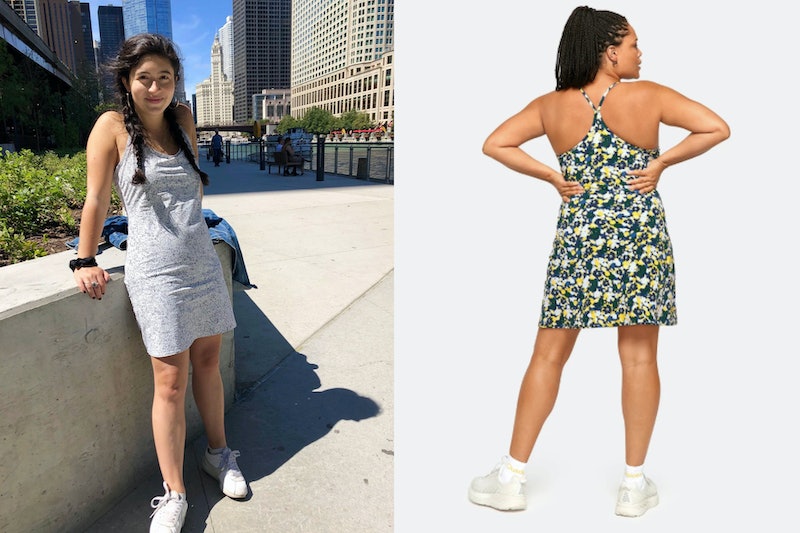 In some corners of the Instagram-attuned internet, Outdoor Voices’ Exercise Dress is a self-referential noun, its importance understood without the modifier of “Outdoor Voices.” In this way it is not unlike #thestew — Alison Roman’s Instagram-famous take on kitchari — or for the nostalgic-minded, The Pants, as in the Sisterhood of the Traveling. And like Roman’s stew or America Ferrera’s pants, the Exercise Dress was not the first to debut the concept when it launched in May 2018 — anyone who grew up playing tennis or lacrosse or field hockey or golf will remember popping on those itchy white skirts, wondering why girls couldn't play in regular basketball shorts like the boys.

The Exercise Dress ($100, XS-XL) is different; it suggests a vision of the world where you can take an early morning barre class and run directly to brunch, or into a meeting, or into any other iteration of #DoingThings, the brand’s ever-present tote bag slogan-cum-life mantra. But when it comes to the “exercise” in Exercise Dress, friends of mine told me while they loved the dress for running errands, they couldn’t imagine actually running in the dress. (Because my social circles comprise people who work in media, many people I spoke to casually were sent the dress by the company, as was I.)

Business of Fashion reports that the dress is Outdoor Voices’ single best-selling item of 2019, and sales reportedly “doubled” when the company added shorts to the garment in September 2018. “I had been working out in leggings so long, I thought, ‘What the fuck?’ I want an alternative,” the company’s CEO, Ty Haney, told Business of Fashion. “I tasked the team with designing [something different].” (Haney was unavailable for comment for this story.) Recently, Outdoor Voices debuted new colorways for the dress, which they celebrated with a 1,000-person strong Zumba class at New York City’s Lincoln Center.

I, similarly, felt like it would be nice to have *more* options to work out in, beyond your standard-issue spandex. But one coworker told me that the idea of working out in the dress felt like “being told to smile in an exercise class” — like performing a forced femininity, in a space where gender performance is already ceaselessly picked over. Leggings and sports bras already leave the shape of our bodies out for public consumption; does deviating from that norm attract even more attention to our exercise routines, where female-bodied people are already at risk for scrutiny or even violence, simply for doing things in public?

Sylvie, 23, owns around 12 to 15 pieces of OV merchandise, but has not purchased the dress because she says she’d feel “silly” working out in it. “I’ve always associated skirts and dresses with older women playing tennis, or it gives me flashbacks to my days as a Junior Varsity lacrosse star,” she tells me.

“If I was running circles in Prospect Park in a dress, I think the running dudes would look at me less seriously [than if I were wearing leggings or shorts],” Sylvie continues. “It’s such a delicate, fucked up balance between feeling good, wanting to look good when I run, and not wanting to attract attention from the wrong people.”

“It took me several months to work up the courage to actually exercise in the exercise dress. I honestly was worried about what people might think,” Rachel Jacoby Zoldan wrote for SELF in an experiment where she did five different workouts in the dress. “I bet if all those people [staring at me] knew how comfortable this dress is, they'd be jealous that they weren't working out in it, too,” the November 2018 article concludes.

Still, plenty of people are excited about the idea of working out in a skirt on the outset. “I love the exercise dress because I love being able to feel feminine while kicking ass playing tennis,” one Instagram user DM’d Outdoor Voices, a screenshot of which the company shared to its public Instagram stories on Aug. 13. “The pockets are great for keys, phone, dog treats, tennis balls...and the liner lets you do so many activities!!” another user gushed in the same medium. “I wore it to bike 20 miles and to a wedding in the same week,” a third wrote.

Sarah, 28, bought the dress this past April. (Hers was one of the DMs Outdoor Voices shared to its stories.) “The first time I worked out in the dress was when a dog walk turned into a run, and I realized how versatile it really was,” she tells me over email. “Along with running, I've worn the dress for pickleball, tennis, and boxing class. I've always preferred shorts over leggings for working out, so this just felt like wearing bike shorts with an overlay. The best part is you only need one piece of clothing for the workout — no more sweaty sports bra, tank top, shorts, etc.” (The dress does not have a built-in sports bra, which means people with larger breasts may want more support; Sylvie says she'd have to wear a sports bra underneath, "which isn't as cute of a look.")

“I first purchased the dress in June, and I was intending to wear it not specifically to work out but to do activities like going to a theme park or going hiking,” Erica, 23, tells Bustle over Instagram DM. She’s since worn the dress to do yoga and to run. “Compared to other sporting gear, I really liked it. It’s comfortable, but still makes you feel secure.”

Erica says she hasn’t gotten any weird looks wearing the dress (“which was really nice, as I’m kind of insecure about fitness activities anyway”). “I got a couple compliments at yoga,” she says.

Naydeline, 20, tells me she recently bought the dress, her first Outdoor Voices purchase, “on a whim.”

“The dress fit so well, for one, and secondly, I just loved the idea that I could go from the gym to brunch or an event with it after,” she says. (When asked if she plans to exercise in it, she responds, “That’s what it’s for, right?”) She says that the versatility of the dress was a huge selling point for her. “There are times where I just skip my workout altogether because I know I won't have enough time to go back home and get ready before an event. With the dress, I'm excited to not have that worry anymore because I can just go from a workout to an event without having to worry about time and getting ready.”

“Plus,” Naydeline says, “Who can say they've worked out in a dress before?”

I didn’t feel like I was wearing an “exercise dress” — I was just wearing a dress, in which I happened to have exercised.

Dre Taylor Lindsay is the co-founder of Rec Room, a newly launched apparel brand that exclusively makes athleisure-inspired dresses, including a model with a built-in sports bra, made of sweat-wicking performance fabrics. (Their website cheekily describes the line as “workout wear hangout wear,” strikethrough included.) “The reason that we're leading with dresses is that we feel like the dress is the simplest piece of clothing that a woman can put on her body,” Taylor Lindsay tells Bustle. “You're not pairing leggings and a top, or having to say, ‘Do I spend the $90 on the leggings and $100 on a top’?”

Further, the dress concept allows room for interpretation. “Our whole approach is, we're not going to tell you what you should do in the dresses, but we like made them so that they can really withstand any [activity].” Taylor Lindsay says she will wear her brand’s dress to hike, or play golf or tennis.

“I think [the exercise dress] feels very functional, while still making you feel confident in how you look,” Erica says, “which is great for someone like me who always feels like I look like a doofus while trying to do anything active.”

But with brands like Rec Room creating options alongside other brands like Outdoor Voices (not to mention Athleta, lululemon, or Nike, who’ve long made performance dresses), now is the perfect time to make working out in a dress a thing. “We feel like now is the time to reclaim the dress,” Taylor Lindsay says. “Dresses were the only thing that women could wear for so long. [Working out in a dress] is just one opportunity of many across your closet to let your personality shine through.”

Over this past weekend, I wore the dress while kayaking on the Chicago river with my mom. While it wasn’t exactly a strenuous workout, the dress gave me exactly the right amount of support, and it dried quickly after I got splashed by a passing ferry. Afterwards, my mom and I walked down Magnificent Mile, Chicago’s stretch of tony shops that’s not unlike New York’s Fifth Avenue, and browsed a Virgil Abloh retrospective at the Museum of Contemporary Art. I didn’t feel like I was wearing an “exercise dress” — I was just wearing a dress, in which I happened to have exercised, and which also had bike shorts and a pocket built in.

Just like it doesn’t really matter if you wear leggings to run or to run errands, it doesn’t matter if you wear the exercise dress to exercise. But when, in the selfcareocene, working out does comprise a kind of performance, it matters that we have options as to the costumes we wear, and the way (or not) we choose to smile through each lap around a track, each vinyasa. If you’re #DoingThings already, you might as well do things in a dress, if that’s your jam.

As Taylor Lindsay says, “I'd be willing to bet that everyone else in your [workout] class will be wearing a dress soon, too."

More like this
The Mobvoi Home Treadmill Helps Me Reach 10,000 Steps A Day
By Carolyn Steber
The Crab Walk Exercise Improves Your Posture & Overall Strength
By Carolyn Steber
The 12 Best Tennis Skirts On Amazon
By Alexa Vazquez
11 Exercises For Dowager's Hump That'll Help Your Neck Posture
By Carolyn Steber
Get Even More From Bustle — Sign Up For The Newsletter
From hair trends to relationship advice, our daily newsletter has everything you need to sound like a person who’s on TikTok, even if you aren’t.