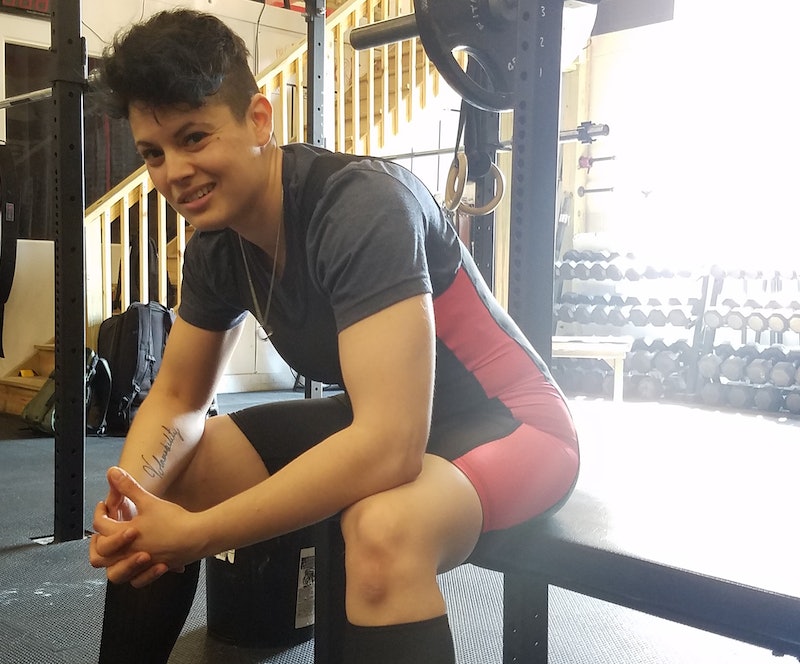 From the ages of seven to 16, I lived with excruciating pain in my knees. Sitting, standing, laying down, it always hurt. None of the doctors I saw knew what was wrong; it was often suggested the pain was all in my head. Being the hardheaded kid that I was, I played basketball and softball and soccer and football anyway. It hurt, every time. But I insisted on playing through the pain because even at a young age, I knew that that's what boys did. It was a toxic message about masculinity, of course, but an all too common one.

That toxicity blended my need to play sports with my need to assert who I was: I loved girls, and insisted to anyone who’d listen that I was a boy. Sports grounded me in those desires and in that knowledge. Sports, despite all the pain it caused me, helped me prove to myself that my internal sense of who I was matched who people saw on the outside. As I grew, I thankfully developed much healthier, gentler models of masculinity. And, in my late 20s, after years of weightlifting on my own, I learned what powerlifting — basically, competitive weightlifting — was.

I thought I could never be a powerlifter. My knees, my gendered body, were the reasons I gave myself to not pursue what I knew I wanted. But eventually, it all merged: expanding my gender possibilities fueled an openness towards my lifting potential, and vice versa. This sport gave me a new, more self-love-based way of experiencing my gender and of being myself in my body.

Before I came out as nonbinary, it never would have occurred to me that I could lift over 300 pounds in a competition.

Part of my journey to powerlifting and my gender identity was losing the gym and gender entirely. When I was in my early 20s, I fell into a relationship with a person who controlled the way I spent time at the gym, with the objective of controlling the way I looked. During those five years, I was not allowed to lift weights, which until had been a huge part of my always-developing relationship with my boyhood, so that I would present more femme. After ending that relationship, I grew to understand how this control was rooted in transphobia. But in the six years since then, as I've been relearning self-love and unlearning transphobia, I've had to work had to dismantle the sense that my trans body is disgusting and fraudulent and fake. Lifting has helped immensely.

After the breakup, I went back to the gym with a vengeance. Men in the gym planted the seeds in my mind: "Hey," they'd ask, "Your lifts are looking great: what are you training for?" At the time, I was training to get my life back, mainly because I was still convinced that I couldn't be a "real" lifter. But when I stumbled upon a trans powerlifting competition and asked a friend what he thought about it, he didn't bat an eye: he started brainstorming a training plan immediately.

Powerlifting competitions, and the grueling training for them, do not allow you to feel like a fake, or like your body is repulsive. There is no room for other people’s misogyny and transphobia when you’re stepping underneath a barbell that weighs many, many pounds more than you do. There is no room for anything but your demon-slaying capabilities when a crowd is watching you — just you — lift the heaviest weights you’ve ever tried to lift. And, with a community forming around me throughout my training, that childhood feeling of being invincible slowly crept back.

Before I came out as nonbinary, it never would have occurred to me that I could lift heavy — over 300 pounds (and growing) heavy — in a competition. “My knees can’t handle squatting heavy like that,” I would tell my now-wife. But even as I got prouder of my accomplishments in the gym, I still carried the weight of the controlling statements I'd internalized. The muscles in my back grew bigger, a physical symbol of how strong I was getting, but it made me feel disgusting again.

Two days ago, I was setting up a bar to lift 325 pounds. And I realized that my masculinity looked so uniquely me: to pump myself up for the lift, I'd turn up my music. My hands would slip into my pockets, and I would quietly close my eyes and visualize the lift. My lifting setup, I realized, looked like my masculinity: gentle and quiet, even if I'm feeling turbulent inside. And then, of course, the outlet: the lift itself. That kind of heavy, solitary powerlifting makes me feel at home, and secure, in the body I have, and the body I continue to build for myself.

Over the years, I have loved my life in the gym, even when I had long hair that I couldn't keep off my neck. I have reveled in cis men asking what I was training for, even when they asked they thought I was lifting heavy “for a girl.” I’m proud of the parts of me that are, and have been, a girl. I don't know what people in my gym see when they look at me today: Do they clock me as genderqueer, a nonbinary boy? A lesbian? A butch girl? I don't know. But the more I powerlift, the less I mind whatever it is other people think my body is.

Realizing that yes, I have been trans all along — from that little boy playing football in the elementary schoolyard to the “guy-identifying” kid at protests just after college, to the high femme trophy wife role I performed and love-hate-love-hated for years after — also made me realize that I could powerlift. I became a powerlifter because it still feels miraculous that I can train like I do after not being allowed to throughout my early-mid 20s, after growing up in chronic pain. And I train others to lift because I want to make sure other people can feel like I do underneath a barbell.

It’s right there in the name: powerlifting. I feel more powerful than I have in years. Without a beautiful, gentle, powerful culture of transness and enby-ness helping me figure out who I am and what I am allowed to do along the way, I don’t think I would have ever felt this way again.