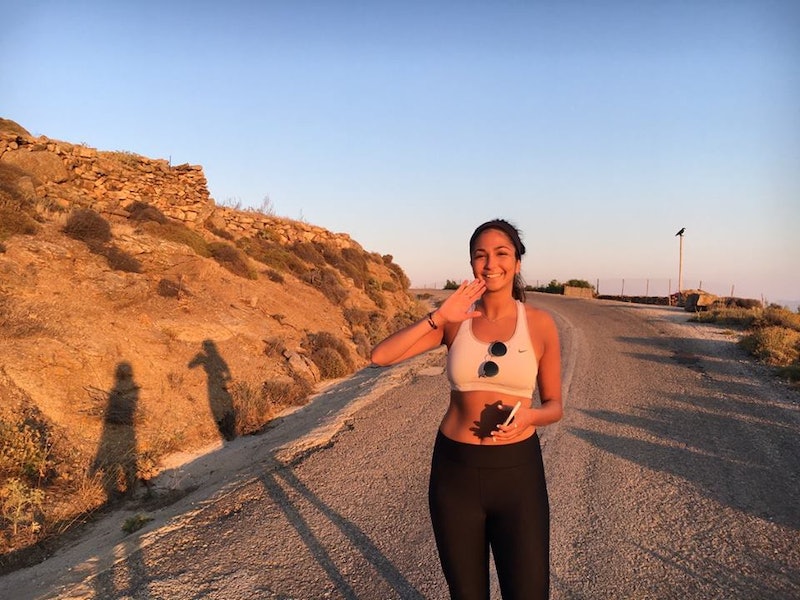 This year, Bustle is celebrating Rule Breakers — the women and non-binary individuals among us who dare to be themselves no matter what. In the lead-up to Bustle's Rule Breakers 2018 event happening Sept. 22, we are featuring stories from an array of individuals about critical moments when they didn't do as they were told. In a world that encourages us to conform unquestioningly, they refused to look or act the part, and we're all better for it. Click here to buy tickets for the event.

This is the last sentence on earth that I ever want to hear — especially when I'm sprinting at an incline on a stationary bike, to the beat of Katy Perry's "Wide Awake," while trying to discern if the liquid I feel descending from my crotch is in fact vagina sweat or a little bit of pee. And yet, I have been in this exact scenario more times than I can count. Being instructed to smile while grunting through the pain of physical endurance has grown commonplace to me, and extends way past spin classes. I've received this "feedback" from numerous instructors — predominantly male trainers.

I can recall sitting in the crux of a deep plié in the middle of a particularly tough barre class and pushing back tears while being told that I should smile and be grateful for the ample opportunity to improve my health. I can still see myself, perspiring profusely during a rigorous bootcamp, while listening to a man with biceps larger than my dreams scream that I'm not smiling wide enough. I can feel myself grinning so incredibly hard that my teeth begin to grind together and I lose all happiness associated with the act. This isn't a dramatization for your amusement — this is my reality.

And I'm not alone. Other women have experienced the same situation countless times, and have echoed my sentiments back to me. I'll never forget taking an exercise class with my manager one morning before work and discussing the moment our instructor had commanded us to smile. "I hated that," she had said, with a knowing nod. "If he likes it so much, why isn't he happily doing the movements alongside us?" Listening to someone I respected confirm a suspicion I already held only pushed me to investigate further — why are exercise instructors so set on telling women to smile? The more friends I consulted, the more cringe-worthy stories I heard. But when I told my boyfriend about what I was researching, he seemed surprised. "I've never experienced that at all," he told me. "Or seen it happen to a woman in class with me. But maybe I just never noticed." His words resonated with me. How is it that a phenomenon so many women immediately identify with can go perpetually ignored by men? Perhaps because as a woman, being told to smile carries much more weight.

Curious about the historical significance of women being instructed to smile, I consulted Dr. Barbara Berg, historian and author of Sexism in America: Alive, Well and Ruining Our Future. Dr. Berg says that this practice of telling women to smile can be traced back to the period of American Industrialization, when women were encouraged to present themselves as pure, pious, and subservient. "Women were never to show anger or irritability, and while not outright demanding that women smile all the time, the message was clear: women had to completely subordinate themselves to men," Dr. Berg tells Bustle. "I call this 'The Woman Belle-Ideal.' The perfect woman: docile, non-complaining, and always happy."

"When men tell us to smile it is an issue of control — they want to affect a subtle change in our behavior."

Dr. Berg says this continued into the 20th century, when smiling women were predominantly featured in popular advertisements. "By the 1950s, smiling women were a staple on TV, beaming, teetering on high heels as they cleaned their homes and endorsed numerous products as part of the post-war commodities boom," Dr. Berg says. Companies everywhere were encouraged to boast “service with a smile” — jobs that became commonly referred to as "pink collar."

The same extends past advertising into the political sphere. "Secretary Clinton was constantly told to smile more," Dr. Berg says. "After the primary, Joe Scarborough tweeted, 'Smile. You just had a big night.' Jon Ralston wrote, 'Finally, she smiled.'" When CNN reporter Anderson Cooper asked Clinton if she thought being told to smile more was an example of sexism, Clinton responded, "Well, let me say — I don’t hear anyone say that about men."

So what are the implications of being told to smile? When you're a woman, the suggestion reads as a command rooted in years of historical submission. "When men tell us to smile it is an issue of control — they want to affect a subtle change in our behavior," Dr. Berg says. "It is more about him momentarily feeling superior to her, than about a real concern for her vulnerability. Society has conditioned men to believe that women exist for their pleasure. So smiling, other than when you truly want to smile or something is genuinely funny, can be seen as a sign of weakness and constant agreeability." Essentially, by telling a woman to smile, you are referencing an ancient patriarchal attitude that places little-to-no value on her free will and emotional desires.

So hey, exercise instructors: please do not scream at me to smile. I exercise to feel capable, to regain a sense of control and purpose, and to reach a meditative internal focus. When I smile, it's entirely of my own volition — an acknowledgment of my body's endurance, a sign of my inner peace. My facial expressions reflect my mood, which is heavily affected by the respect and consideration given to and received by those around me. I am not "The Woman Belle-Ideal;" I am a Woman Belle-Real.