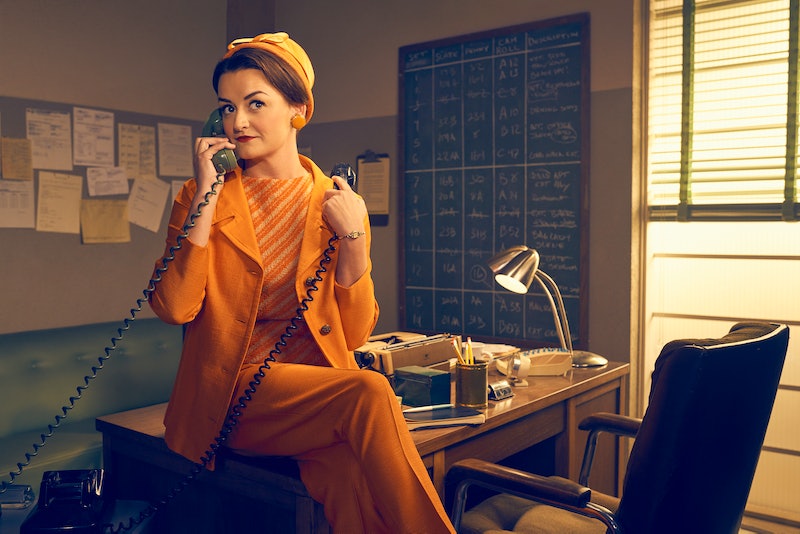 Although at its heart, Feud is about Bette Davis and Joan Crawford, the FX series does a great job giving the secondary characters their own time in the spotlight as well. Sunday's episode is the spotlight for two of these people, Crawford's maid Mamacita and Robert Aldrich's assistant Pauline. So, with all the history the show is covering, you may be wondering if Feud's Pauline Jameson is a real person. The answer to that is both yes and no, according to the actor who plays her, Alison Wright.

Technically, Pauline Jameson is the name of a real actor of that time, which is a bit confusing upon first glance. But, aside from the name, Wright's character and the 1920-born English actor don't share any similarities. Instead, Wright tells Bustle that "Pauline is a composite character, really the only one in Feud," and she represents a lot of young women in the industry — those who had dreams of doing more but were often relegated to being secretaries or assistants.

She is marginally based on a real secretary of Aldrich's, though, says Wright. Geraldine Hersey was Aldrich's secretary during a time when he was working in Europe. And, according to Alain Silver's biography, What Ever Happened to Robert Aldrich?, it's actually thanks to Hersey that Aldrich even got the Baby Jane project to begin with, as she let him know about the script. The biography references a New York Times article in which Aldrich credited Hersey, calling her "a better judge of what will make a good movie than are several major 'experts' on the subject."

Wright concurs, saying that Hersey was able to see the good in a project that so many studios passed on because they "didn’t think it could it could be a commercial success or that a film about two women over 40 could possibly ever make any money." Of course, the movie ended up being a huge success, and it's all thanks to Hersey's sharp eye.

Wright's amalgamated character contains some of Hersey's intelligence, with the actor saying that Ryan Murphy wanted Pauline to be "whip smart and cool as a cucumber" and able to hold her own against Feud's larger-than-life leading ladies. "It was really clear that Pauline could handle herself with these women," Wright says. "She wasn’t really intimidated by them ... so I got to create a strong resilient woman from that time period."

So Wright watched a ton of Crawford and Davis' films, as well as movies from the '40s and '50s in general to prepare Pauline. She also read the 1963 book The Feminine Mystique to get into the headspace of a woman in that era. "It’s a very different time, and reading that book was shocking to me," Wright says. "A woman couldn’t have a credit card without her husband in this country until 1974."

And, in the late '60s where Feud takes place, strength could only get a woman so far before a man was quick to put her back into place. Pauline will face some of that frustrating sexism in Episode 4, and it's hard to watch someone so deserving of more responsibility at the studio be rejected because of her gender.

While people like the fictional Pauline or the real Hersey may sadly be overlooked by history, Feud is putting these women back in the spotlight to remind viewers that people behind the scenes are just as important as those in front of the camera — even if hardly anyone else recognized it at the time.

More like this
Naomi Osaka & Emma Raducanu’s Experiences Have Inspired A New Amazon Show
By El Hunt
What's New On Netflix: A Third '365 Days' Movie & Lili Reinhart’s New Film
By Arya Roshanian
What’s New On Netflix: 'Never Have I Ever' & 'Indian Matchmaking' Return
By Arya Roshanian
Everything To Know About The HBO Max & Discovery+ Streaming Service Merger
By Brad Witter
Get Even More From Bustle — Sign Up For The Newsletter