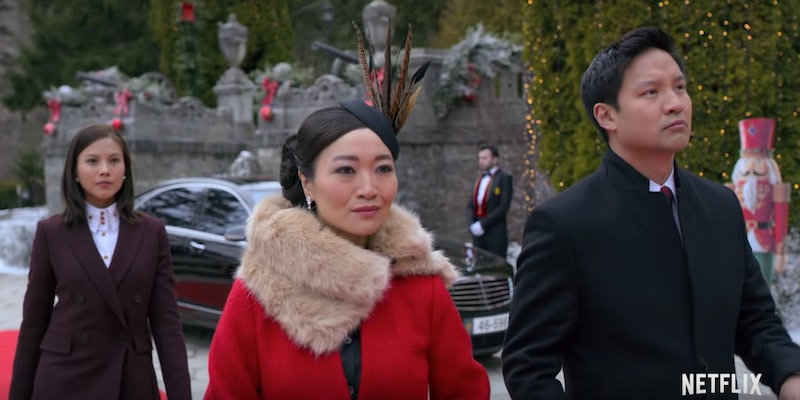 The Royals are back in the news! No, not Harry and Meghan; the Christmas royals — Amber and Richard, king and queen of Aldovia and our hearts. They're hosting neighboring country Penglia in A Christmas Prince: Royal Baby, preparing to re-sign a 600 year-old treaty between the countries. Alarmingly the treaty goes missing, and if the Aldovians can't find it before the Penglians leave, turns out there's a curse that drops on the title Royal Baby's head. Hoo boy. Those planning their Christmas vacation might ask, is Penglia a real country, or at least based on one? Though it's about as real as the kingdom of Aldovia (which is to say... it's not), there's plenty of fun guessing where Aldovia's neighbors to the East might be based.

Though information on the film is scant, the trailer offers a surprising amount of clues as to Penglia's whereabouts. Like this convenient map used to show Queen Amber exactly where Penglia is.

Though it seems culturally based on England's royal family, Aldovia looks to be vaguely in the area of real-life Romania or Moldova, current and former constitutional monarchies with a closer set up to Aldovia's royal wrangling. If that's where Aldovia matches up on the map, that would make Penglia vaguely near the country of Georgia, or southern tip of Russia.

But take a closer look at that peace treaty: the Penglian writing looks awfully similar to Chinese calligraphy. Could Penglia be a stand-in for a country near or adjacent to Russia or China? There's Mongolia, who actually had a Pax Mongolia following Genghis Khan's uniting Mongol factions into the largest contiguous land empire of all time. Or perhaps one south of China, like Myanmar? After finally overthrowing the lingering remnants of British rule, Myanmar royalty's finally making a comeback.

In addition to calligraphy, there's also a bird symbol that seems to represent Penglia on the treaty, along with a yellow lion standing in for Aldovia. The only country represented by a phoenix in real life is Greece, but Nepal's national symbol is the danphe, also known as the Himalayan monal. The bird's tail is a little short for the creature depicted on the treaty, but that might be too much attention to detail to ask from a movie series where the Chicago River stood in for New York.

It's hard to garner any guesses from the royals themselves, aside from the fact told to queen Amber that the Penglians are very traditional, and their kingdom's been around for over 600 years. That means the treaty dates from around 1420. Looking at a slightly more realistic map of Europe around that time, seems the Mongolian theory gains some traction, as the "Golden Horde" was an extension of the empire Genghis Khan put together, ruled by several of his descendants, and was just beginning to fracture at that point in time.

Again, if you're looking for realism in a film series where a New York reporter ends up marrying a prince after finding secret acorn ornament clues, you're probably barking up the wrong tree. But if you're fully invested in the royal doings of Aldovia and its neighboring kingdom Penglia, just go with the flow and enjoy the faux-royal intrigue.

More like this
Here's How Netflix Should Adapt Prince Harry's Memoir Into A Movie
By Ginny Hogan
How Andrea Riseborough Got Nominated — & Almost Disqualified For An Oscar
By Jake Viswanath
Alicia Silverstone Revives Her 'Clueless' Character In This Super Bowl Commercial
By Jake Viswanath
Austin Butler Recalls Lisa Marie Presley Showing Him Elvis’ Bedroom
By Jake Viswanath
Get Even More From Bustle — Sign Up For The Newsletter
From hair trends to relationship advice, our daily newsletter has everything you need to sound like a person who’s on TikTok, even if you aren’t.