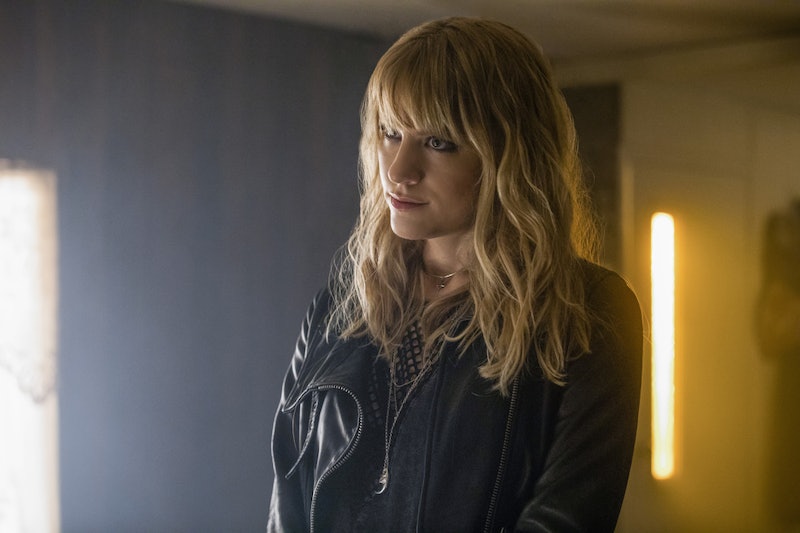 Amid the race to unmask Riverdale's Black Hood, another theory has sprouted up online: fans think Penny Peabody is Betty's real mom, and it's her, not Alice, pulling the Black Hood's strings.

Viewers will recall Penny as the unscrupulous Southside lawyer Jughead turned to for help with his dad. Rather than charging him for her services, she requested a favor to be called in later on. But when Jughead informed F.P. of the deal, he warned him to stay far away from that "snake charmer." It's still unclear what Penny's history is with F.P., but Reddit user lCrackers posits that she's actually Betty's biological mother, making Alice her half-sister as well as Betty's aunt.

According to the theory, Alice, ever the meddler, felt that the Southside wasn't a fit place to raise a child, so she packed up and started a new life on the other side of town, bringing Betty along with her. Penny, meanwhile, kept watch on her daughter from afar, which is how she would know that Betty checked out Nancy Drew religiously, or why she might enact a murder plot based solely on her Jubilee speech. In order to prove that the Northside isn't as virtuous as it seems, she's begun targeting the perceived sinners that have resided there: first Fred, then Ms. Grundy, and finally, Midge and Moose. Shooting the Sugarman — who's revealed to be Mr. Phillips, Jughead's English teacher — throws a slight wrench into this concept, but considering Penny is a steadfast member of the Serpents, it makes sense she'd want one of her Ghoulie rivals out of the way.

That Penny would go as far as psychologically torturing her own daughter seems severe, but the Reddit user offers that she simply wants Betty to realize what she believes is her "true nature," the Dark Betty that briefly emerged in Season 1. During one of their Black Hood phone calls, Penny even tells Betty 1) She knows her and 2) They are "the same," which, at minimum, supports the idea that they're related in some way. Plus, they certainly look the part, and while sharing blonde hair and light eyes may be common in the broad scope of the world, in a small town like Riverdale, it could be a lot more than coincidence. Even Betty is closer to making the connection than she thinks. In Season 2, Episode 5, "When a Stranger Calls," she speculates in her notepad that the Black Hood might have a daughter. Could that be the Riverdale writers sneaking in a subtle Easter Egg?

To be clear, Penny wouldn't be the one actually committing the murders; She may be cruel, but she's smart, and she isn't a woman who wants to get her hands dirty. In this scenario, then, she's merely the puppeteer, cashing in on all the favors she's owed from bailing criminals out of trouble and enlisting them to do her bidding. That's why the Black Hood that's been shown on-screen is a stocky, white, green-eyed man. He's just the fall guy.

And to address another potential hole, all signs point to Polly being Alice's daughter. In fact, it makes more sense that Polly and Betty have different moms. The age gap between them has never been entirely clear: Polly was dating Jason, who would have been in the same grade as Cheryl and Betty, but the show never addresses whether Jason was the younger man in their relationship, he and Cheryl are actually a year older than the core four, or Polly was somehow in the same grade. It's quite possible, then, that Polly and Betty are closer in age than they've been told, and Penny and Alice got pregnant around the same time.

As is the case with any murder mystery, fans won't know for sure who's behind the Black Hood until the big on-screen reveal, but the Reddit user makes a convincing argument, and at the very least, another potential member of the Cooper family has been added to the suspect pool.