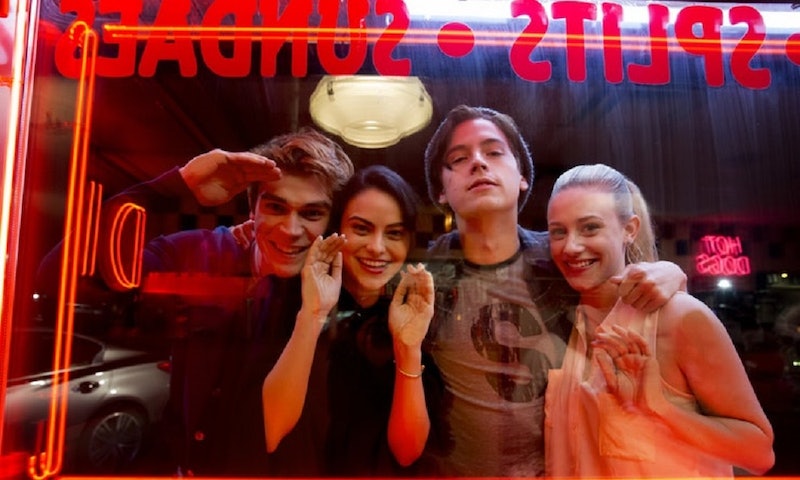 There are already a lot of fan theories about Riverdale Season 2, and the latest one is worth paying attention to. On Tuesday evening, the show's creator Roberto Aguirre-Sacasa tweeted about the "Sugar Man," a mysterious character who sounds creepy as hell. From the picture that Aguirre-Sacasa shared with the tweet, fans need to know who the Sugar Man is on Riverdale and fast.

Shared as a kid's crayon drawing of Cheryl and Jason Blossom holding hands next to an impossibly tall, angry looking fellow holding a bag labeled, "sugar," the image was captioned, "Lock your doors, #Riverdale, the Sugar Man is coming..." That should be enough to fuel your nightmares for a few nights, if not your Riverdale-hungry imaginations.

Obviously, there's a lot to unpack with this picture, but the first notable thing to address is the creepiness of the image alongside the timing of Riverdale's second season. The first episode will be released on October 11, meaning that it'll be arriving just a few weeks ahead of Halloween. That brings up two major questions: is Sugar Man part of a Riverdale Halloween special of some kind? And could this all be in some way connected to Aguirre-Sacasa's supernatural Afterlife With Archie comics?

Just breathe, guys. It's OK. If fans on Twitter are to be believed, then the popular consensus so far seems to be in favor of this character being part of a Halloween special. Which makes sense. Especially when you consider that Sugarman seems to be wearing the sort of striped sweater that Freddy Krueger would approve of.

It would also fit into the repeated speculation that Riverdale might start to incorporate supernatural elements, like the ones seen in Afterlife With Archie. Which is something that Aguirre-Sacasa hinted at happening during an interview with Entertainment Weekly back in March. The Riverdale writer, said:

Afterlife or not, there will definitely be a big genre element to season 2. It’s going to make people go, ‘They’re not really doing that, are they?’

So feasibly, Sugar Man could be part of that "big genre element" that Aguirre-Sacasa was talking about there. Which could mean that the character could be some kind of a serial killer, supernatural monster, or hell, even some kind of a paranormal entity with a taste for some of that sweet, Blossom syrup. So, while there might not be zombies running amok like in the comic version of the Archie reboot, it still sounds like there's a good chance that Sugar Man could bring some other classic horror tropes to the show, instead.

It's worth noting, however, that other fans on Twitter had some less-supernatural ideas on who or what the Sugar Man will be which are just as tantalizing.

A couple of users speculated that he could be the drug dealer that FP Jones was talking about at the end of Season 1. Another user made a similar connection by pointing out that "sugar" could be taken as being slang for "drugs," and that this guy may be a supremely evil dealer of them. Both of these feel like explanations that could easily follow on from the story left open from the Season 1 finale.

Another Twitter theory speculated, however, that the picture could be something to do with a flashback to Cheryl and Jason as children, which could delve us back into the murky, traumatic histories of the Blossom family. And that's that we likely haven't seen or heard the last of. Considering that Cole Sprouse told TV Line that Season 2 of Riverdale is going to be "darker and stranger," it could be that the show is slowly delving into those supernatural or genre qualities that Aguirre-Sacasa has developed in Afterlife With Archie.

Whether the Sugar Man will be the first glimpse of those qualities, however, or simply another harsh reminder of Riverdale's dark underbelly, is something that fans will have to keep theorizing about until the show returns in October. Either way, it looks like we can all look forward some creepy happenings hitting our favorite small town very soon.