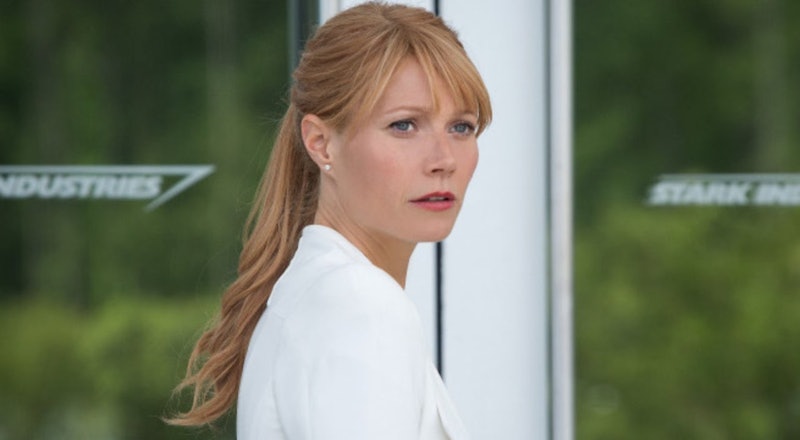 Ever since 2008's Iron Man kicked off what would become the enormous Marvel Cinematic Universe we know today, Gwyneth Paltrow has been a steady part, playing Pepper Potts. At first a no-nonsense assistant to Robert Downey Jr.'s Tony Stark, Pepper evolved over the course of the Avengers franchise into Tony's girlfriend, but also into a manager and CEO. In Avengers: Endgame, she became a mother and a superhero, sporting an Iron Woman suit of her own to fight Thanos. As a result, Pepper is probably one of the most well-rounded female characters in the MCU. Now that Tony is gone, have we seen the last of his partner? Or will Pepper Potts be in Spider-Man: Far From Home?

Paltrow isn't listed in the cast for Far From Home, which opens July 2, on IMDB, but that doesn't mean that she won't pop up in the movie, especially considering that the MCU goes to great lengths to keep its secrets. The biggest hint that Pepper Potts might show up in Far From Home is a little Easter Egg that appeared in the first trailer. As Insider noted, "Happy Hogan delivers a $500,000 donation check to Aunt May that is signed by Pepper Potts, named co-founder and chair of the Stark Relief Foundation." Pepper's signature in the first Far From Home trailer suggests that she still running the show at Stark Industries after Tony's death, as fans may have expected.

That being said, Paltrow has reportedly declared that her days playing Pepper Potts are over. In Early 2019, she told Variety that she'd be retiring from the MCU after the release of Avengers: Endgame. "I mean, I’m a bit old to be in a suit and all that at this point," she said. "I feel very lucky that I did it, because I actually got talked into it. I was friends with [Iron Man director] Jon Favreau. It was such a wonderful experience making the first 'Iron Man' and then to watch how important it has become to the fans.”

However, Paltrow does sound open to a quick trip to the MCU for cameo purposes. In that same Variety interview, she continued, "Of course, if they said, 'Can you come back for a day?,' I will always be there if they need me."

You may have seen on the internet that Paltrow hilariously completely forgot that she was even in in Spider-Man: Homecoming. In a segment for Jon Favreau's new Netflix cooking series The Chef Show, he has to explain to her that a scene they shot with Tom Holland and Downey Jr. was actually a scene for Homecoming, not for an Avengers movie.

The scene in question probably did only take a day to shoot, so who's to say she hadn't also shot a quick cameo appearance for Far From Home during production for Endgame? Paltrow doesn't seem to be keeping track of all of the quick bits she films for the MCU, so it's totally possible that a Pepper Potts Far From Home cameo exists. With Favreau's Happy having a supporting role in Far From Home, and Holland's Spider-Man possibly moving on up to take over the Iron Man mantle, Pepper Potts is still a huge presence in both of their lives, and Paltrow might pop up now and then, whether she remembers it later or not.