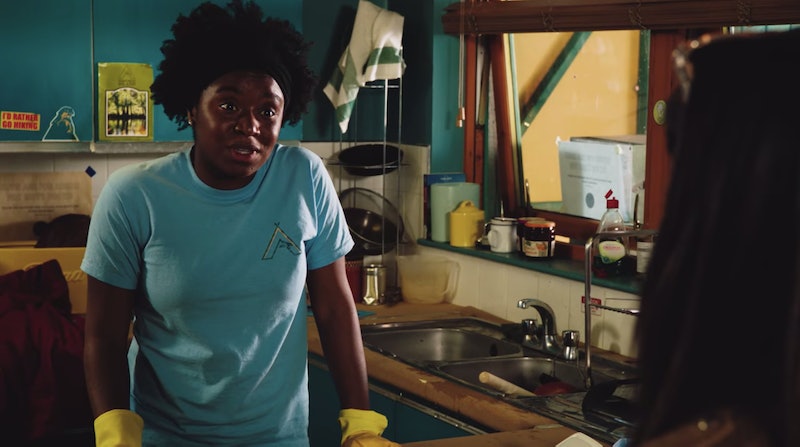 In The A List, a group of British teenagers arrive at camp on Peregrine Island expecting the ultimate summer vacation, but find themselves in danger rather than some kind of raucous Love Island situation. Based on all the creepy masks and antics in the trailer, you'll be glad to know that Peregrine Island from The A List isn't based on a real place. But it does seem to take inspiration from a long list of classic YA stories.

While "Peregrine Island" is also the name of a location in the video game City of Heroes as well as the titular setting of Diane B. Saxon's novel Peregrine Island, it is a fictional place. As we learn in the trailer, one of the characters is definitely immortal or something supernatural — so no, this was not based on a true story.

The A List's writers, Dan Berlinka and Nina Metivier, are used to telling stories about realistic kids in heightened worlds. Their last series, Dixi, was a children's science fiction mystery about hackers. This time they're telling stories for a young adult crowd, and getting both spookier and more mature. "Horror films are sex and death," Berlinka told Den of Geek, and when it comes to teenagers, "you're just getting your head around mortality and sexuality. It's illicit and forbidden, and there's a rite of passage element."

Executive producer Anne Brogan told Metro that the show draws influence from current teen hits like Riverdale and Stranger Things, but as far as the co-creators are concerned, there are two to three major, if less recent, inspirations for The A-List as well:

"Whenever anybody asked what I was working on, I would always describe it as Mean Girls meets Lost," Berlinka told Den of Geek. Mysterious creatures? Scary strangers? The creeping fear that the island is something other than an island? It honestly wouldn't be surprising if a hatch or a polar bear showed up next.

At the center of the island drama is a fight for power between two Queen Bee types. Not only is the show inspired by Tina Fey's 2004 comedy, the characters are fans of it as well. "We reference Mean Girls constantly," Berlinka continued. "We like to write characters who are living in a world where these other shows exist. They're very self-aware.”

The show's other co-creator grew up watching Buffy. "So much of what's happening [on The A-List] is about that pressure to belong and the price you pay for fitting in or not fitting in," Metiver told Den of Geek. "There's a strong connection between those smaller social dramas that feel so big when you're that age and the creepier, heightened things that are happening in this show."

Buffy's speciality, particularly in the early seasons, was using genre conventions as metaphors for teen angst. The A-List is attempting to do that for Gen Z's anxieties in a sunny, lush setting — that is very thankfully not real.

More like this
This 'Bridgerton' Polin x 'Love Island' Crossover Is Everything
By Darshita Goyal
Reese Witherspoon Got Hooked On ‘Never Have I Ever’ After Son Deacon’s Debut
By Stephanie Topacio Long
Everything To Know About Netflix’s 'Never Have I Ever' Season 4
By Jack Irvin and Gabrielle Bondi
Does 'Locke & Key’s Ending Mean There Could Be A Season 4?
By Sophia Moore
Get Even More From Bustle — Sign Up For The Newsletter