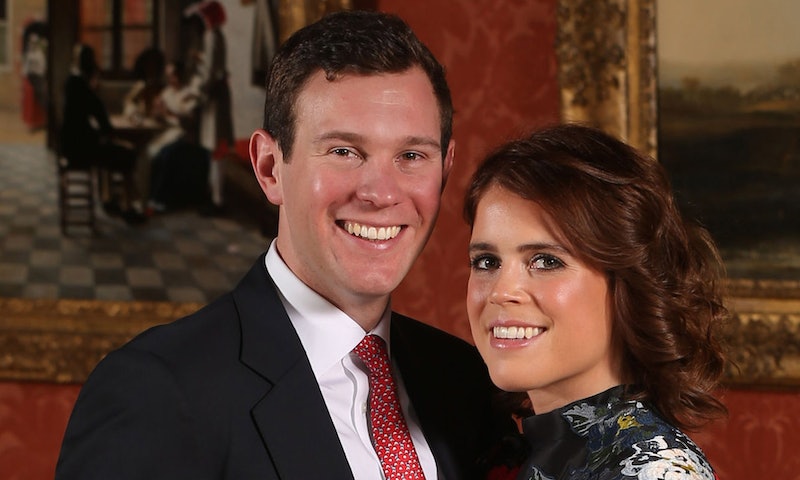 With the year's second royal wedding just weeks away, buzz over Princess Eugenie's upcoming nuptials is picking up again. Because, naturally, fans of Britain's royal family want to make sure they've got all the details straight ahead of time. But for those wondering if Princess Eugenie is going to change her last name when she marries Jack Brooksbank next month: The answer to that particular question is still sort of up in the air, mostly because the choice to take her future husband's last name, or to keep her own, is left up to Eugenie.

Not a totally novel concept in this day and age — thankfully — though the surname question does become considerably more complicated when it concerns the British monarchy. According to a handful of reports, royal protocol stipulates that a woman is traditionally expected to take on her husband's title upon marriage. Unless, of course, she holds a more prominent title. (See: Queen Elizabeth.) In Eugenie and Brooksbank's case, it's a little bit different, since it's the bride-to-be holding the royal title to begin with, not the groom.

Still, according to a report from the BBC back in January, Princess Eugenie "will keep her royal title when she marries Mr. Brooksbank," though she'll still have the option to adopt his last name, if she decides that's what she wants to do. And, just so everyone's clear about the baseline specifics here, Eugenie's official royal title is Princess Eugenie of York. Or Princess Eugenie Helena Victoria of York, technically speaking.

In the past, women of the British monarchy in Eugenie's position have opted to take on a particularly lengthy "official" name after marrying a non-royal. Per a report from Hello! magazine, Eugenie might also have the option to take on the title of HRH Princess Eugenie, Mrs. Jack Brooksbank after the couple's wedding on Oct. 12. ("HRH," for the record, is short for His or Her Royal Highness.) But again, it sounds like those particular decisions regarding surnames and official titles, will largely be left up to Eugenie's discretion.

In fact, it seems the only name-change scenario that's out of the princess' hands is that of her fiancé. Unlike Kate Middleton or Meghan Markle (both former non-royals who received Duchess titles of their own after respectively marrying William and Harry) Brooksbank isn't necessarily entitled to a royal distinction of his own, even after marrying a royal.

"There is no precedent for giving a peerage to the commoner husband of a princess on the wedding day," explained royal historian Marlene Koenig during a conversation with Town and Country last month. Which means, unfortunately, Brooksbank will not be turning in his own surname in favor of one that corresponds to that of his soon-to-be wife. Well, her royal title, anyway. Per the Royal Family's official website, technically, none of its members have last names at all.

But regardless of which title Eugenie decides to take on following her wedding, it sounds like the princess isn't worrying too much about it. "Eugenie couldn’t care less about titles and is perfectly happy to be Mrs. Brooksbank," a source reportedly told U.K. publication The Mail on Sunday a few months back. So, however this particularly complex nomenclature situation turns out, it sounds like Eugenie is focusing on what's most important right now: The fact that she's tying the knot with a man she loves in just a few short weeks, obviously.

It seems pretty clear (even just based on their public appearances together and what the public knows of their relationship) that Eugenie and Brooksbank are a noticeably happy couple. Surnames and technicalities aside, that's definitely what matters most heading into a marriage.