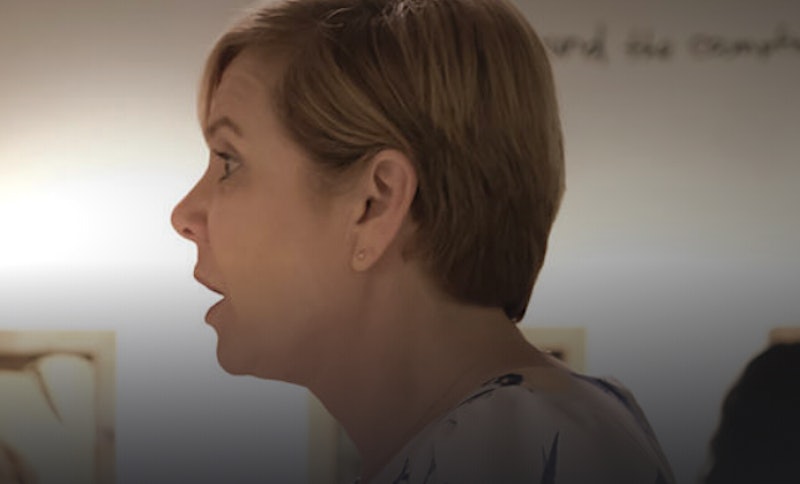 Meeting the future in-laws can be a terrifying undertaking, but what do you do when it's one of your parents that proves to be the source of any and all drama? That's the general premise of Lifetime's new original movie Psycho Mother In-Law, which finds a newly engaged Amber caught in the middle of a war of wills between her own mother and future mother-in-law. But is Psycho Mother In-Law based on a true story? This is one nightmare scenario no one would like to see become a reality.

The good news is that this movie appears to be entirely a work of fiction. This shouldn't come as a huge surprise, given that Lifetime movies often tend to err on the side of fantasy rather than fact. That being said, the concept of troublesome mother-in-laws isn't exactly uncommon — in fact, many movies have been made centered around that very premise. However, typically the conflict happens between the bride and groom's mother a la Jane Fonda's Monster-in-Law. That won't be the case with this movie, though. Instead, the bride's mother will be the one causing trouble and perhaps even stopping the wedding altogether.

Planning a wedding can be stressful enough as it is, and while family drama is to be expected as a result of all that, Amber is about to get a very rude wake-up call in regard to how bad things can really get. Let's just hope that her fiancé is ready to take those vows of sticking together in "good times and bad" seriously.

To help get a better handle of what this Lifetime Original has in store, the official synopsis of Psycho Mother In-Law reads as follows:

"Amber Vickers is ecstatic that she will finally be making the walk down the aisle with her prince charming Luke. After multiple failed relationships, she was beginning to think that something was wrong; but her soon-to-be mother-in-law and best friend, Jill, believes that Amber is the picture-perfect daughter she never had. Everything is coming up roses until Sharon Vickers, Amber's mother, arrives for a visit. Gaudy, straight-laced and opinionated, Sharon is the complete opposite of Jill. What was supposed to be a benign first meeting of the in-law's quickly turns into a competition, as Sharon and Jill have widely differing views on life, love and marriage. As the weekend visit is coming to an end, Sharon takes matters into her own hands, rendering Jill incapable of escaping her house, and proving to her once and for all that no one comes between Sharon and her daughter."

So will Jill and Sharon be able to work out their differences? Just how far exactly will Sharon go to keep Amber all to herself? Will Amber and Luke actually be able to tie the knot by the end of it all? You'll just have to tune in and find out, but one thing's for sure — it'll definitely make you a little less excited for your next family reunion.