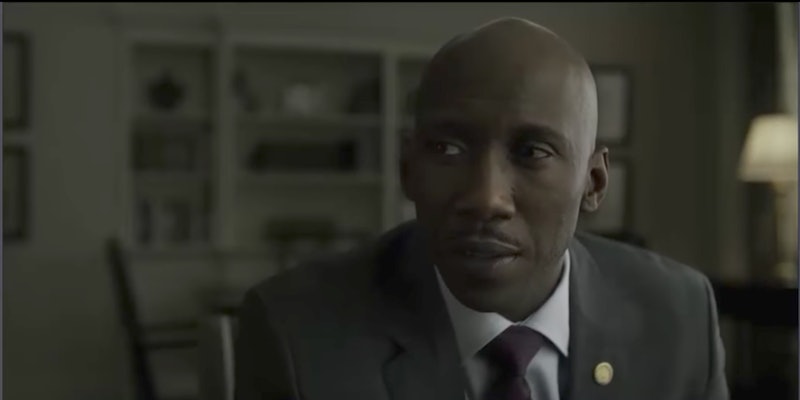 With President Frank Underwood and company setting up to continue corrupting the nation when House Of Cards returns to Netflix on May 30, fans are probably wondering if the politician's former righthand man, Remy Danton, will return to his side for Season 5.

While anything is certainly possible in the world of television, it's highly unlikely that Remy will appear in the upcoming season of HOC. That's because Mahershala Ali, the actor that plays the role of Underwood's former Chief of Staff, announced his departure from the series to GQ when Season 4 came to an end in 2016. Ali later cleared up the notion that he quit the show in an interview with Deadline. He explained,

"I didn’t quit. We had conversations because the character had run his course. There wasn’t really anything new to offer the show ... But I do want to do more in my career and that kind of aligned with the character running its course, and with how the show was framed."

It's worth noting that 2017 would prove to be an incredible year for the 43-year-old entertainer, to say the least. Ali snagged the Best Supporting Actor Academy Award for his role in Moonlight, which also won Best Picture at the ceremony earlier this year. In addition to the Oscar win, the California native also landed a part in the critically acclaimed 2016 film, Hidden Figures and starred in the Netflix series, Luke Cage.

During his last season on House of Cards, fans would see Remy trying to distance himself from politics as he attempted to create a life for himself outside of D.C., supporting the idea that the character may have run his course on the show.

Considering the facts, it appears that Ali will not be returning to portray Remy in Season 5, as all sign point to the fact that he and his character have both moved on to bigger things on and off screen. Still, maybe he'll pop up in a cameo — fans will just have to wait and see.