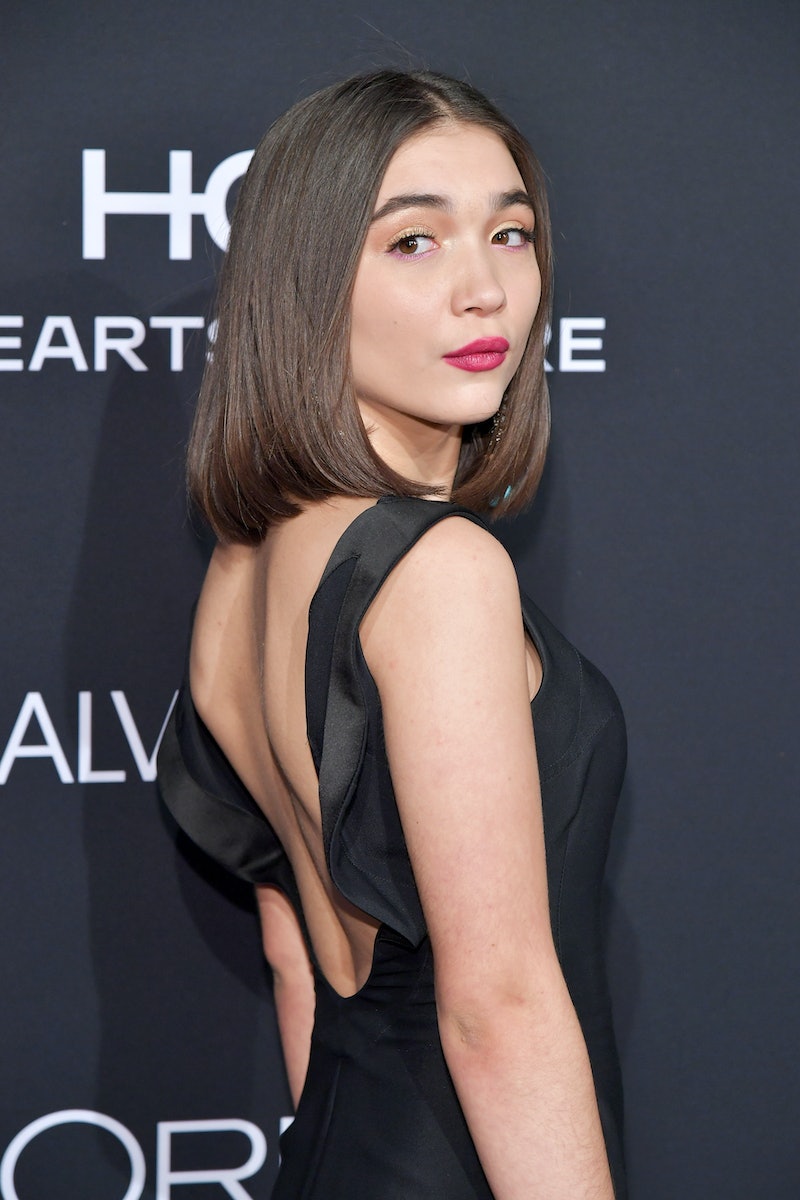 Every year we hear the popular mantra of “new year, new you," indicating some massive refresh that happens in the new year. In some cases, there are those who actually follow that idea in a major way. Rowan Blanchard chopping off all her hair is just one good example of someone truly ringing in a new year with a new style — and truer expression of self.

The former Girl Meets World star made a big change that most of us are too chicken to think about even consider, let alone executing. The 17-year-old actress unveiled the pixie cut at the 2019 Golden Globes, giving fans gave such Audrey Hepburn vibes. All the while, she served looks donning a short cotton candy pink side-sleeve ruffle dress that can best be described as delicious. No, seriously.

Blanchard's hairstylist, Laurie Heaps, who gets applause for this cut, posted a close up of the young actress to her Instagram to share the meaning behind it.

"She said the haircut 'actualized her identity'," she wrote under the photo, "That’s when I knew I had done something really special. These are the moments I live for in my work."

If Rowan's experience is any indication, taking a big leap of faith with the big chop has its perks.

While to many, this may seem like a shock, but the actress has actually undergone plenty of cuts prior to nipping her hair all the way to her nape. In fact, her hair styles now have an entire resume.

When the world was first introduced to Rowan in 2014 on Disney Channel, she'd only been 13 and donned naturally lengthier locks that went all the way down her back.

Two years later, her deep brown roots were shortened to then only reach her shoulders.

By the time 2017 rolled around, Blanchard's hair had transformed into a neck length bob.

Now, we're here with this stunning pixie style. It's risky, but it's also super chic and so worth the plunge.

Blanchard posted a photo of her of her own Golden Globes look against a beach background to make this pink dress pop.

"Everyone’s favorite loofah," she captioned the photo, and once fans got a full look at the post, they were heavily into it.

"Queen didn't come to playyy," one fan commented under the photo.

One commenter made the comparison to another short-haired celeb. "'I'm getting Emma Watson vibes from the chop and I love it, you look great." Also, not wrong.

Despite that it seems like history of Blanchard's haircuts is something of a gradual progression of coolness, it was far from it. According to PopSugar, to achieve this look, the actress had to cut a whole nine inches off the bob she'd sported all 2018 long.

Just goes to show that something as simple as a haircut can have the ability to give you a new attitude — and, for Blanchard, it gave her a whole new outlook on her identity.

More like this
12 Stunning Beauty Moments From London Fashion Week S/S 2023
By Olivia Rose Ferreiro
9 Hairstyle Trends Spotted At New York Fashion Week S/S 2023
By Audrey Noble
Jennifer Lopez's ‘90s Updo Hairstyle Takes Me Back To Middle School
By Olivia Rose Ferreiro
The 9 Most Head-Turning U.S. Open 2022 Beauty Looks
By Rachel Lapidos
Get Even More From Bustle — Sign Up For The Newsletter