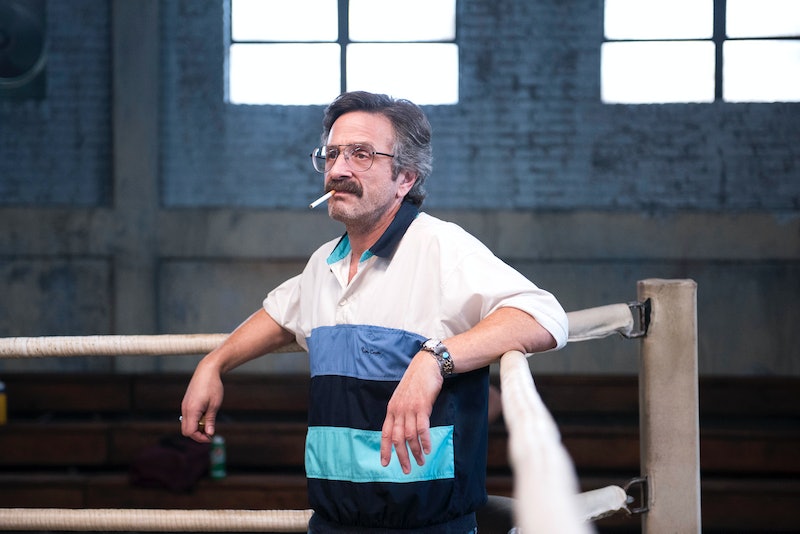 GLOW is about an all-women wrestling league. But in most all-female enterprises, there is an annoying, often problematic man somewhere in the shadows who threatens to ruin the whole thing. In Netflix's GLOW, based on the real Gorgeous Ladies Of Wrestling league, that role is taken up by Sam Sylvia. Sam, played by comedian and podcaster Marc Maron, is a washed-up movie director hoping to earn some money for his next film venture by getting this female wrestling series off the ground. Is Sam from GLOW based on a real person or is he an invention of the series?

While Sam doesn't appear to faithfully based on one person, the idea of a former Hollywood director creating and pitching a G.L.O.W. show comes from the league's real history. The original series was co-created by Matt Cimber, a former B-movie Hollywood director whose most notable film, Butterfly, was nominated for multiple Razzie awards including "Worst Director." Cimber's history of schlocky films includes titles such as The Witch Who Came From The Sea, Yellow Hair And The Fortress of Gold, and The Sexually Liberated Female. All of these credits sound like they owe a lot to the male gaze, which was also a factor in the Gorgeous Ladies Of Wrestling.

Cimber had a strong idea of what he wanted the tone of G.L.O.W. to be. At the height of the show's popularity, Cimber went on the Donahue talk show and explained that the show is "camp" in a matter-of-fact way. His filmmaking career was built upon creating campy films, so it's no wonder that his voice carried through in the wrestling matches of G.L.O.W.

In the documentary GLOW: The Story of the Gorgeous Ladies of Wrestling, the wrestlers talk about how Cimber had a strong sense of humor that he also injected into the show. As a result, the broadcasts would feature small sketch comedy sequences in between wrestling matches.

It's fitting, then, that Sam is played by established comedian Marc Maron. His role as Sam will be Maron's most notable fictional role since his rise to popularity with the popular WTF podcast and his biographical comedy show Maron. Maron's natural sense of humor and penchant for sadness are both fitting, and he seems to maneuver the role of the sleazy-but-kind director with ease.

Sam's relationship with the cast is a big part of the Netflix show, and it seems that the real league also had some interpersonal struggles. In a 2012 interview with the Village Voice, former wrestler Angelina Altishin (Little Egypt) claimed that some of the cast were yelled at on set by Cimber. Even decades later, wrestlers were hesitant to see him at a reunion, according to her. Though Cimber declined to be interviewed for the documentary film, he did attend the reunion. And Altishin told the Village Voice, "Since the documentary Matt has reached out to us and cares about the work we did as much as we do. I see Matt as part of our G.L.O.W. family not just a part of our G.L.O.W. history."

Cimber's contribution was crucial to the Gorgeous Ladies Of Wrestling, for better or worse, and it seems that Maron and the Netflix series will do his complicated legacy justice.