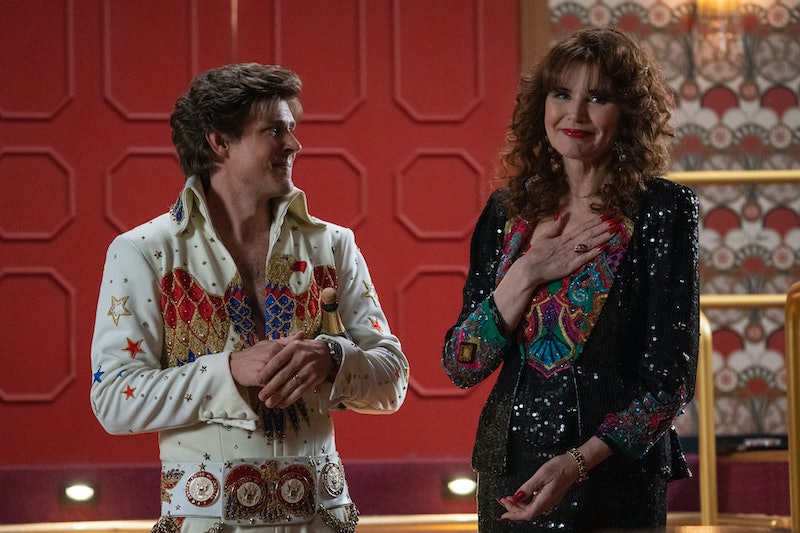 The Gorgeous Ladies Of Wrestling are heading to Sin City for GLOW Season 3, and Geena Davis is joining them. She plays new character Sandy Devereaux St. Clair, a former Vegas showgirl turned manager of the Fan-Tan Hotel and Casino, where the GLOW ladies are now performing. Unlike some of the other characters on the show, it doesn't appear that Sandy is based on a real person, but she does seem to draw some inspiration from Irish dancer Margaret Kelley, aka Madame Bluebell, who founded the world famous Bluebell dancers in 1932.

According to Thrillist, Kelley partnered with American choreographer Donn Arden in the late '40s to bring the first Parisian-style nightclub shows to Vegas. Per the New York Times, their shows differentiated themselves from the others by featuring tall women (over 5 feet 10 inches was a must), extravagant costumes, and difficult choreography. They were, in short, professional artists — in the same way that the GLOW ladies train and practice for their own performances.

Case in point: Thrillist notes that Kelley's performers had dance pedigrees (usually classical ballet) and would undergo rigorous boot camp training to prepare for dancing 90 minutes in elaborate costumes, which could easily add anywhere from 30 to 80 extra pounds. Once the show ended, the dancers never hung out on the Strip, as was common for other female entertainers. Lara Preister, a former performer for 10 years, told The Washington Post that a showgirl was "an untouchable thing, that beauty and mystique."

Showgirls really saw their heyday in the '50s and '60s, so given that GLOW is set in the '80s, it's not surprising that Davis' character is now finding new life behind the scenes as the hotel's entertainment director. The Independent's review of GLOW Season 3 says that Sandy has a "complete indifference towards wrestling," which hints Sandy chooses to host the Gorgeous Ladies of Wrestling not because she enjoys the sport, but because she sees some of herself in the women bringing it to life. It's possible that Sandy's role will be to act as a mentor to the women, in the same way Kelley did IRL to the dancers in her own troupe.

Playing Sandy also allows Davis to comment on ageism, both in relation to the many showgirls who aged out of the business and in regard to Hollywood overall. "They described the character as someone who had really changed her life and managed to stay in the same industry but moved things around to become someone in charge," Davis told Entertainment Weekly. "Because they figured a lot of showgirls, after you're done, what are you going to do? She was able to land a high-powered position, which showed her mettle."

She added that she's "disappointed that we're in an industry where sometimes women have to try to reinvent themselves because they're not getting parts anymore because of their age. That's just wrong that things drop off so precipitously for women as they get older."

But just as Davis and Kelley found a way to rise beyond society's innate sexism and ageism, so did Sandy. And hopefully, so will the women of GLOW.

More like this
Justin Timberlake’s ‘Candy’ Character Really Investigated Betty Gore’s Killing
By Brad Witter
Here’s Everything Coming To & Leaving Netflix In June
By Alyssa Lapid
'Ghost In The Shell: SAC_2045' Was Only Supposed To Last Two Seasons
By Kadin Burnett
What’s New On Netflix: 'Stranger Things' & 'Somebody Feed Phil' Return
By Arya Roshanian
Get Even More From Bustle — Sign Up For The Newsletter