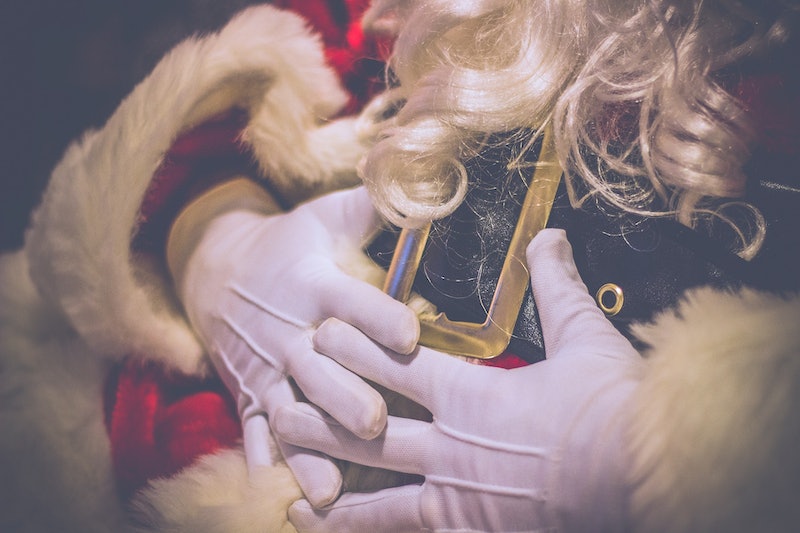 I was equal parts amused and horrified to discover today that “is Santa Claus dead?” is apparently a common-enough internet search that it autocompletes when you type “is Santa Claus…” into Google. I was even more amused/horrified to discover that we may now know where he’s buried: St. Nicholas’ tomb might have just been found. It’s in Turkey (not the North Pole). My sincerest apologies to anyone whose childhood I just ruined.

St. Nicholas was a real person; a Christian bishop known for helping those in need (a lesson which I feel many people today who are continually complaining about the supposed “war on Christmas” could probably stand to learn…), he was born in Patara — a maritime city on the Mediterranean coast of what’s now Turkey — somewhere around the year 280, according to Biography, and lived most of his life in Myra. He inherited quite a lot of money when his parents died, which he used primarily to help folks who were less fortunate (although, sadly, occasionally with a dose of slut-shaming to go along with it.) It’s believed that he died on Dec. 6, 343 (so, he would have been around 63 at the time); as such, his feast day is celebrated on Dec. 6. He’s known as the protector of children and sailors, as well as a symbol of gift-giving.

Over time, his Dutch nickname, Sinterklaas, became Santa Claus in English-speaking countries, and his Dec. 6 feast day ended up getting wrapped up into the holiday of Christmas itself. Still, though, the myth has its roots in the man — and now, we may finally know where the man himself lies.And hey, guess what? That location actually makes a ton of sense, because it’s right where he lived when he was alive.

According to the Telegraph, archaeologists conducting electronic surveys of an ancient church in Demre uncovered a shrine they believe is the tomb of St. Nicholas. Why are they so certain the shrine, which was discovered in the gaps underneath the church, does, in fact, belong to this particular saint? Because Demre was once Myra, the place in modern-day southern Turkey where St. Nicholas spent most of his life.

The excavation of the shrine is still in the very early stages, but archaeologists are optimistic. Said Cemil Karabayram, who is the head of the Monument Authority in Antalya, the province in which Demre is located, said to the Turkish paper Hurriyet Daily News (via Newsweek), “We believe this shrine has not been damaged at all, but it is quite difficult to get to it as there are mosaics on the floor.” They’ll have to carefully remove the mosaics in order to get at the shrine;once that’s done — which, again, will take some time — they’ll hopefully be able to determine whether or not Nicholas’ remains really are held within the shrine.

Here’s where it gets weird, though: It was once thought that St. Nicholas’ remains were actually removed by a group of sailors from Italy and taken to the Italian city of Bari in 1087. For quite some time, it was believed that St. Nicholas’ remains were located at a basilica in Bari that bears Nicholas’ name (Basilica di San Nicola). Indeed, as Atlas Obscura notes, the Santa Claus Peace Council (which, yes, actually exists — it’s based in Turkey) wrote to Pope Francis in 2013, asking if Turkey could have at least some of the remains interred at the Basilica di San Nicola back — since, y'know, that's where St. Nicholas was from and all. However, the Guardian reports that documents found have led archaeologists to believe that the remains in Bari may not actually be Nicholas’ at all; instead, they might belong to a local priest. This would be consistent with the idea that St. Nicholas is already in Turkey, entombed in that shrine that was just discovered.

In any event, there’s still a lot we don’t know here — but hopefully an excavation of the shrine will shed some light on the subject. Either way, though, it's looking like Santa really is dead. Sorry, Googlers.

More like this
26 Ghost Story Podcasts To Get You Ready For Halloween
By Jessica Booth, Mia Mercado, JR Thorpe and Emma Carey
Why TikTok Is Obsessed With Caesar Salads Right Now
By Alexis Morillo
Behind The Hilarity Of The "POV: You Walk Into My Room" TikTok Trend
By Lexi Inks
TikTok's Butter Board Might Be The New Cheese Plate
By Emma Carey
Get Even More From Bustle — Sign Up For The Newsletter