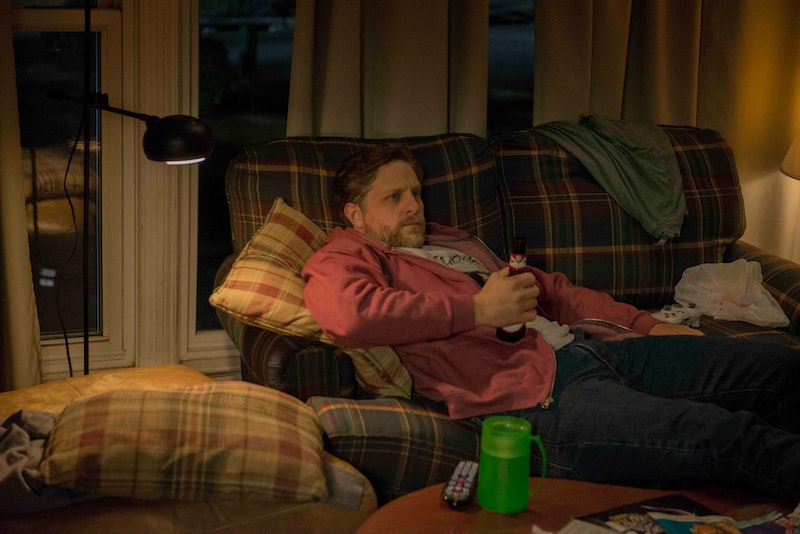 Spoilers ahead for Episode 3 of The Act. In the March 27 episode of The Act, Dee Dee and Gypsy Rose Blanchard reach a turning point that signals the beginning of the end for their relationship. When Gypsy and Dee Dee attend a cosplay convention and Gypsy becomes enamored with an older man, she begins to more actively pursue her growing independence. The show's team hasn't made explicitly clear if that man, named Scott in The Act, is based on a real person — though the series is based on true events, it has taken some creative liberties. But according to the 2016 BuzzFeed story on which the show is based, the situation does sound similar to what happened in real life.

The Act depicts Gypsy's encounter with Scott at the convention, shows how they communicated online and via text afterward, and eventually follows Gypsy as she runs away to meet up with him in person. Dee Dee realizes Gypsy is missing in the middle of the night, puts the pieces together of where she's gone, and frantically shows up at Scott's doorstep to bring her home. According to the aforementioned BuzzFeed article, Gypsy did meet a man at a science fiction convention in February 2011, and began an online friendship with him. She later ran away to meet him at his hotel room, and what happened next sounds nearly identical to what goes down in the show. Per BuzzFeed:

"Through conventioneer intelligence — 'We were all overprotective of her,' [fellow convention-goer] Kim Blanchard said — Dee Dee found [Gypsy and the man]. She apparently knocked on the hotel room door with papers that showed Gypsy was a minor, and the man let Gypsy leave. (He could not be reached for comment.)"

Dee Dee also reportedly told the man that Gypsy was underage so he'd cease communication with her, despite the fact that she was 19 at the time. No names or other details are mentioned in this account, so it's unclear if the man in question was named Scott, or if he was dressed as Wolverine, as in the show. Regardless of the specifics, though, it's clear that this week's episode is meant to explore that situation in particular, and set the show up for the real-life backlash that followed.

According to the same BuzzFeed report, Dee Dee's attitude toward Gypsy changed drastically after she brought her home from the man's hotel. She was "furious to the point of public spectacle," the article states, and even allegedly smashed the computer she'd used to chat with him with a hammer.

Years later, Gypsy claimed to ABC News that following the attempt to run away, Dee Dee physically restrained her and worked to further alienate her from the rest of the world. "She physically chained me to the bed and put bells on the doors and told … anybody that I probably would've trusted that I was going through a phase and to tell her if I was doing anything behind her back," she told the outlet.

As anyone familiar with the true story knows, this incident is far from the worst thing that will happen between Dee Dee and Gypsy on The Act, but it does mark a juncture in their relationship — and one that Gypsy will only continue to put them at odds as the show moves forward.

More like this
What’s New On Netflix: Ana De Armas’ 'Blonde' & A Nick Kroll Special
By Arya Roshanian
Paul Mescal, Man Of Mystery
By Samantha Leach and Heather Hazzan
The 'Reasonable Doubt' Cast Includes A 'Save The Last Dance' Reunion
By Grace Wehniainen
'Elite' Season 6 Is Arriving Sooner Than You Think
By Gretchen Smail and Grace Wehniainen
Get Even More From Bustle — Sign Up For The Newsletter