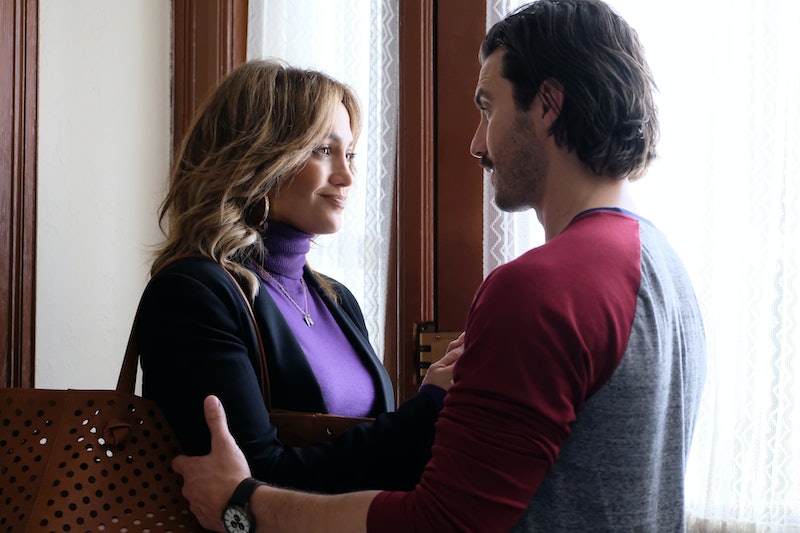 If you want to take a break from schmaltzy Christmas movies while still watching something that makes you feel good,, then Jennifer Lopez's new movie, Second Act, sounds like the perfect December watch for you. The new comedy hits theaters on Dec. 21, and the premise is about as heartwarming as you can get. In Second Act, J. Lo's character, Maya, gets a chance to create a completely new life for herself after she lands a big job thanks to a fake resume. If you're wondering if people actually do that and whether Second Act is based on a true story, the answer is yes and no.

People certainly do fake resumes in order to get hired. In 2017, one study reported on by CNBC found that 75 percent of HR managers find inaccuracies on resumes, and that same year, INC. reported that another study found that 85 percent of hiring managers found fabrications on applicants' resumes. As inspiring as the movie is about taking big chances and pursuing one's dreams even later in life, you probably shouldn't steal this strategy, because lying on resumes is risky business.

While the comedy isn't based on any specific people or events, it does have roots in real relationships. Lopez and her co-star Leah Remini, who plays Maya's friend Joan, recently talked to E! News about how their true friendship informed their characters. "I kept telling her [Remini], 'we're not acting, we're just like, we're being us, we're gonna do our thing,' and we just brought that to the film," Lopez said. As you probably know, Remini and Lopez are pretty much BFFs, and they explained to E!'s Justin Sylvester that they saw a lot of themselves in their characters.

"Joan and Maya's friendship is very much, on the page, the type of friendship that Leah and I have, which is like brutally honest, to be able to make each other laugh," Lopez explained. Then, Lopez and Remini listed the qualities of their relationship that they see reflected in Second Act, which includes their ability to be vulnerable with one another and their openness to, as Lopez said, "check you when you need to be checked" — while also providing support, of course.

The friendship in Second Act is just one of many sweet relationships in the movie, which also includes a mentorship between Maya and a colleague, Zoe (Vanessa Hudgens), and her fun romance with a new guy, played by Milo Ventimiglia.

One of the film's screenwriters, Elaine Goldsmith-Thomas, who's the president of Lopez's production company, told The Movie Times that the most important relationship in the movie isn't any of the ones that Lopez's character has in the film. "It's a love story about a woman who learns to fall in love with her life and her life choices. And that is what this movie is, it is a romantic comedy, but the other person in it is her," Goldsmith Thomas said.

As unrealistic as a few events in Second Act are, there's still a lot of truth to it. As Lopez told E!, "Life is funny, and [it] has sadness, and life has turns and twists." In that sense, the movie is definitely based on reality.