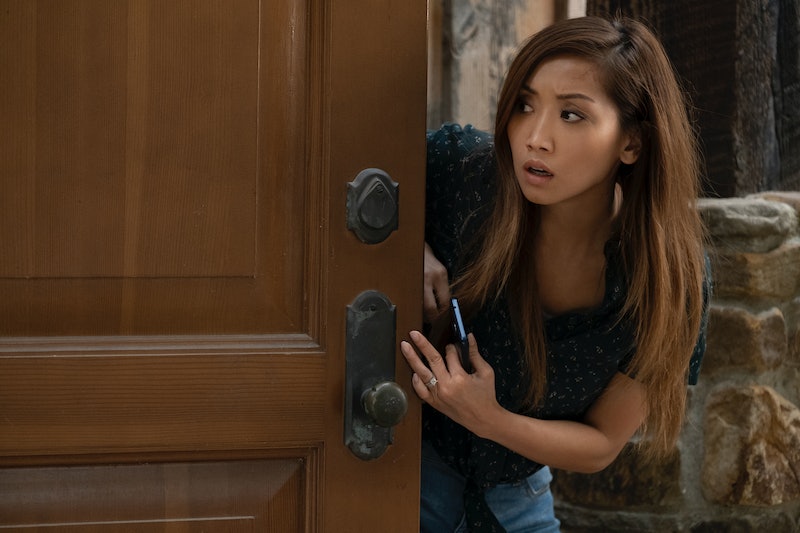 Hitting Netflix on July 18, the psychological thriller Secret Obsession looks like a creepy, suspenseful ride. The movie stars Brenda Song as Jennifer, a woman who suffers from amnesia after she's attacked at a rest stop. Russell (Mike Vogel), the man claiming to be her husband, takes her home to a massive cabin in the woods to recover, but as her mind heals, Jennifer's memories start to come back, and her assumptions about Russell's true identity come into doubt. Dennis Haysbert plays a detective on Jennifer's case. And with so many realistic-sounding procedural and medical aspects that come up in this film, you may wonder if Secret Obsession is based on a true story.

Secret Obsession doesn't appear to be based on any real events, which is a good thing, since it appears that Russell isn't exactly who he says he is. It must be pretty frightening to not remember whether or not you're married to someone, where you live, or even who you are, even without a clear and present threat. The movie looks pretty predictable, however. Russell is bound to be an evil twin or an old boyfriend or a stalker of some kind. But that doesn't mean it won't be fun and thrilling to watch Jennifer figure out the puzzle.

And as it turns out, the type of amnesia Jennifer seems to be suffering from isn't as uncommon as you may think. Fans of romantic movies might recall the 2012 film The Vow, which starred Rachel McAdams and Channing Tatum. McAdams played a woman who can't remember the last five years of her life as the result of a car accident. She therefore has no recollection of her husband, her marriage, or many of her friends.

The story was based on the real-life experiences of Kim and Krickett Carpenter, who went through a similar ordeal, only 10 weeks after their wedding day. And there are a number of other stories of couples who have had to reignite their romance or start their relationship all over because of brain injuries. Thankfully, those stories don't involve murder and terror, like Secret Obsession does.

So while there are a number of real-life examples of couples navigating one partner's memory loss, it certainly seems like Secret Obsession is abandoning the more realistic stories of amnesia and forgotten spouses in favor of a more frightening, thrilling story line. And that's OK with Song, who told Refinery29, "I think people (me included) just love scaring themselves ... Obviously having a stalker is no joking matter, but stalker movies are just so fascinating and terrifying."

Secret Obsession's inherent predictability also shouldn't hamper your enjoyment of the movie. Song also told the site, "The audience actually finds out the twist before my character does. I think the thrilling part of the movie is trying help Jennifer catch up."

And just so you know exactly what kind of movie you're getting yourself into, know that Secret Obsession comes from Peter Sullivan — the same writer responsible for the "Wrong" series of Lifetime thrillers: The Wrong Stepmother, The Wrong Mommy, and The Wrong Crush, among others, many of which star Vivica A. Fox.

Now that Netflix has successfully become a source for original rom-coms, with movies like Set it Up, To All The Boys I've Loved Before, and Always Be My Maybe enticing fans, the streaming giant looks like it's taking a stab at the sexy thriller genre too.