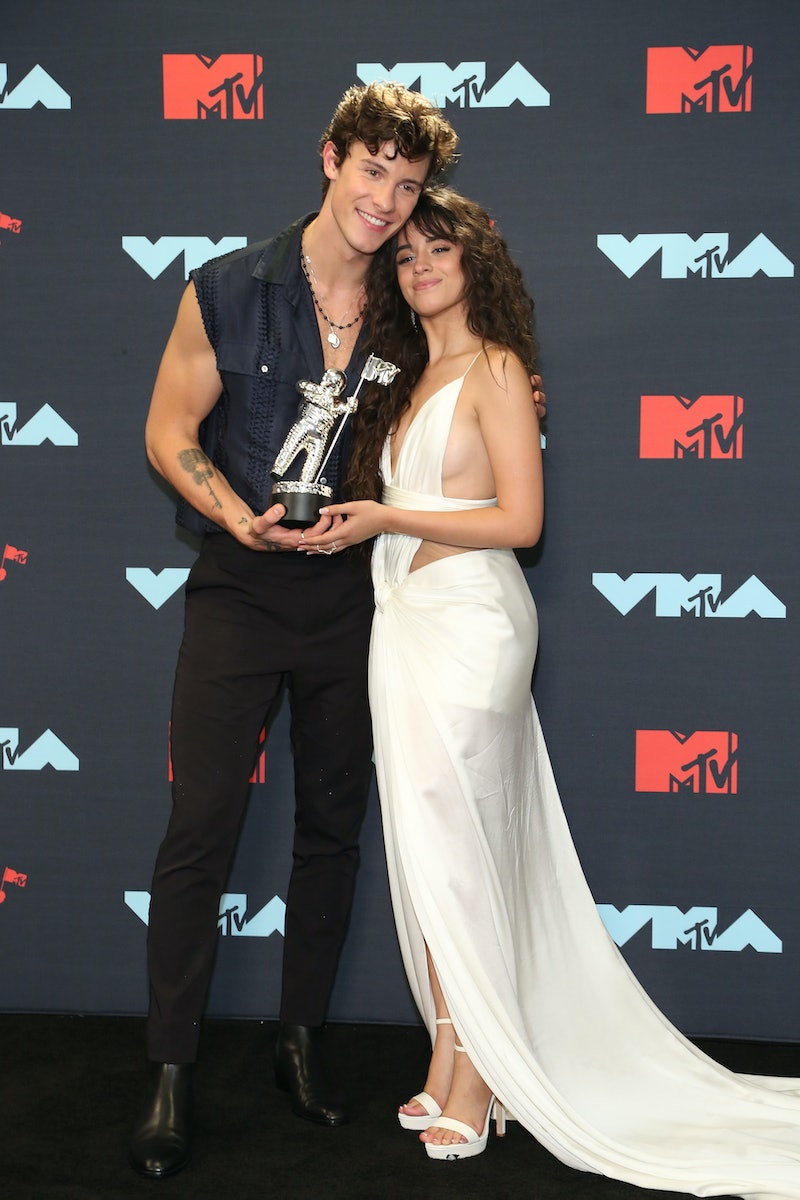 Camila Cabello has been teasing new music for a few weeks, and on Thursday, Sept. 5, she delivered two new singles: "Shameless" and "Liar." Her fans are obviously very excited about the new music, but they're also wondering if Camila Cabello’s “Shameless” is about Shawn Mendes. That's to be expected considering the steamy video for their collab "Señorita" and all the rumors about their not-yet-confirmed new rumored relationship. One thing's for sure, if "Shameless" isn't about Mendes, Cabello has some explainin' to do.

On the surface, "Shameless" is about being so into or in love with someone, that you don't care who knows. You're willing to be "shameless" about it, if you will. Fans who are willing to look a little deeper, however, are theorizing that the song could totally be about Mendes.

Right off the bat Cabello sings the lyrics, "It's been a secret for the longest time/Don't run, no, don't hide/Been running from it for the longest time." Cabello and Mendes have been sparking romance rumors, on and off, since they released their first duet together, "I Know What You Did Last Summer," in 2015. So to say they've been "running from it" for a long time, is true. They've also known each other even longer, since 2014 when they both were on tour with Austin Mahone, when Cabello was a part of Fifth Harmony.

The chorus features the lyrics, "Show me you're shameless/Write it on my neck, why don't ya?/And I won't erase it." This could easily describe all the PDA Mendes and Cabello have exhibiting this summer. They've been seen out and about often, and even kisses and holding hands. For a pair who haven't confirmed they're dating, being that forward in public is a way of throwing secrecy out the window. In other words, it could be their way of being "Shameless" about their love. Furthermore, in the bridge, Cabello urges the subject of the song to give into their feelings for one another and just be together. This could possibly be inspired by Cabello and Mendes' decision to be more public with their romance as well. And fans are pretty convinced that the song is about Mendes.

Adding even more evidence to the idea that "Shameless" is about Cabello's new rumored romance, Mendes promoted "Shameless" on his Instagram story with a screenshot of him listening to the song on his Spotify. Yes, this could just be a case of a friend (or boyfriend) showing support, but it's pretty telling that he posted a mind-blowing emoji and a heart only about "Shameless" and nothing about "Liar," (at the time of publication, that is).

But there also are some hints that "Shameless" is not about Mendes. In the second verse, Cabello sings, "My kisses are history, they go back a long time, uh/And I'm tired of loving somebody that's not mine, no." That first part, again, could hint at Mendes' history with Cabello, but the second part seems to hint at the subject of Cabello's affections being with another — "somebody that's not mine." While it might not involve cheating, the lyric implies that for whatever reason, the subject can't be with Cabello. The last public relationship Mendes was in was with Hailey Bieber (Baldwin at the time), in 2018. So unless "Shameless" was written then, this might hint that it's not about Mendes.

Whether "Shameless" is about Mendes, a mystery lover, or just a made-up man of her dreams, it's sure to be another hit for Cabello. Her fans are happy to be celebrating her new music, no matter who it's about.