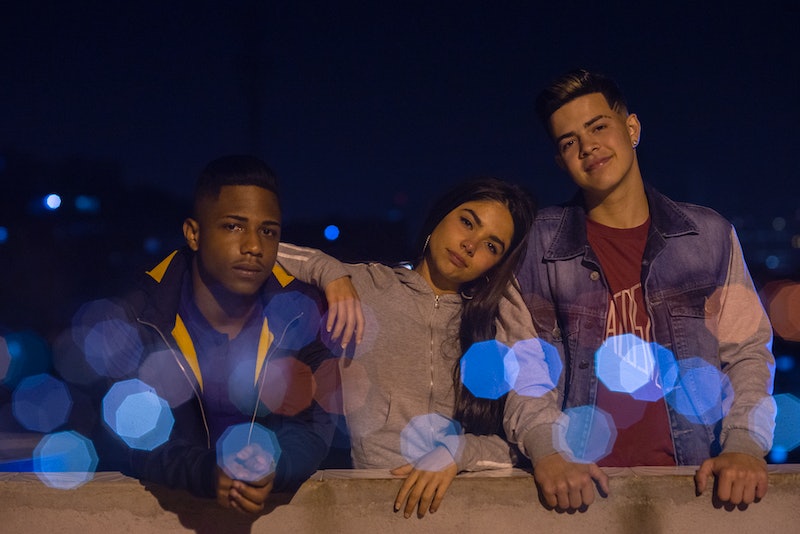 Though Netflix's new Brazilian series Sintonia isn't based on a true story, it does explore the realities of growing up in an impoverished neighborhood. The coming-of-age drama follows three teen friends — Nando (Christian Malheiros), Doni (MC Jottapê), and Rita (Bruna Mascarenhas) — navigating music, drugs, and religion while growing up in São Paulo. They're all following very different paths, but realize that they'll have to rely on each other to achieve their dreams. As Deadline writes, "nothing is easy in the favela, and at any moment everything can change." Think of it like the Brazilian version of On My Block.

As the Sintonia trailer shows, the story takes place in one of São Paolo's favelas — which, according to Britannica, are crowded slums located just outside of Brazil's largest cities. The houses are often made with makeshift materials like cinder blocks, wood scraps, and sheet metal with little to no plumbing and electrical wires, which leads to sanitation and health issues.

The impoverished residents frequently deal with crime, gangs, and drug trafficking while trying to support their families during these difficult circumstances. So, though Doni, Rita, and Nando are fictional characters, their stories will very likely resonate with those who've lived in similar communities.

In the trailer, Doni is seen in the studio pursuing his music career. But his father — who either works in or operates a convenience store — says he needs to do real work in order to make it in the world. Doni seems to want to get out of São Paulo and make it big, but without support, it's easy to get caught up in the streets — just take it from Rita, a supply runner enamored with the prospect of earning fast money. She's also dating a hustler, which comes in conflict with her religious background. She's told that God has big plans for her life, but she can't really see past her current circumstances.

The last of the trio, Nando, heads up a drug operation in order to support his family. Doing so puts his life and danger — and threatens to land him in prison, as we see when he is arrested and booked at a police station. But it seems like the most feasible option to provide for those around him. There's a lot of partying, gunfire, and drama wrapped up in this sneak peek into the lives of kids whose big dreams are weighed down by the bleak reality around them.

Sintonia is Netflix's latest original Brazilian series following the success of 3% and The Chosen One. It's a lot more realistic than its sci-fi/fantasy predecessors, but the success of shows like On My Block and Euphoria prove that viewers don't always want their coming-of-age stories told through a rosy, nostalgic lens.

The show is also a chance to tell diverse stories from around the world and prove that even with so many differences, many people (including fictional characters) want the same thing - to live their dreams, maintain important relationships, and find happiness and security in their lives.