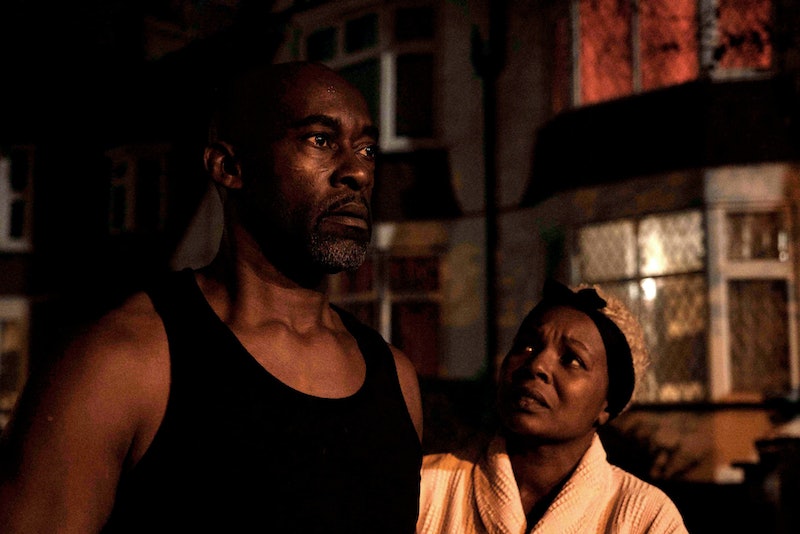 As one of the most shameful episodes in modern British history, the Windrush Scandal has rightly become subject to many reports, documentaries and films. The latest of which, a feature-length BBC One drama directed by Stella Corradi, of Trigonometry fame, couldn’t come at a more relevant time. Based on the true story of Anthony Bryan, a British man's experience under the Tory government’s 2012 hostile environment legislation; a policy aimed at making the UK unliveable for undocumented migrants and force them to leave the country. At the epicentre of the Windrush scandal, Bryan's story manages to humanise the very real experience hundreds of individuals faced. It is a harrowing tale and not easy viewing, but an absolute must-watch. Here's everything you need to know about Sitting in Limbo.

When will Sitting in Limbo air?

Is Sitting in Limbo based on a true story?

Yes. Stephen S. Thompson based Sitting in Limbo - his first screenplay for TV - on the true story of his brother Anthony Bryan.

Who is Anthony Bryan?

Bryan was one of hundreds of individuals caught up in the Windrush scandal which impacted a group of people who, after moving from the Caribbean to the UK as children, fell victim to the government's hostile immigration policy.

Bryan is a family man and a painter-decorator who had never been in trouble with the law, whose entire life is upended when he applies for a passport to visit his elderly mother in Jamaica. His citizenship is called into question and he is told he can no longer work, before being arrested in his London home, detained for five weeks and booked on a plane bound for Jamaica.

The TV drama follows not just Bryan's experience – the gross mistreatment he is subjected to and the very real effects of it – but that of his family and community, too.

Who's in the cast of Sitting in Limbo?

The feature-length drama is led by Patrick Robinson and Nadine Marshall, who portray the characters of Anthony Bryan and Janet McKay-Williams, respectively. Also appearing in the show's cast is Pippa Bennett-Warner as Patrick's daughter Eileen, CJ Beckford as her brother Gary, Skinner Carter as Patrick's mother Lucille, and more.

Sitting in Limbo is the first television screenplay by Stephen S. Thompson, who based the series on the true story of his brother and his personal struggles experienced in Britain during the Windrush Scandal.

"Like everyone caught up in the Windrush scandal, Anthony has been severely traumatised by the experience. It has badly affected his confidence and left him questioning his very identity," Thompson explained.

"As his brother, I saw what he went through first-hand. I couldn’t bear the idea that he had suffered in vain and it made me determined to tell his story. For me, this is personal."