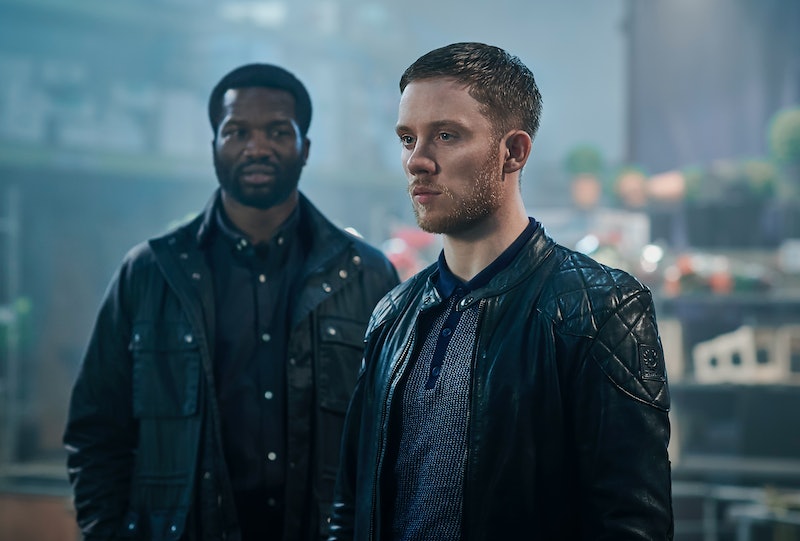 Gangs Of London has all the ingredients for a seriously addictive quarantine series: vengeance, violent action scenes, and suited up gangsters. The new crime thriller stormed to the top of viewers' watch lists when it was released on Sky Atlantic on April 23. Set in London (obvs), this show is certainly not for the faint hearted, but is Gangs Of London inspired by real events or by real-life people?

Gangs Of London tells the story of, well... gangs in London. But, in particular, the Wallace family, the most powerful crime organisation in the city. After the patriarch of the Wallace gang is murdered, his son Sean (Joe Cole) takes the reins and vows to find his find his father's murderer. As you can expect, it gets pretty bloody pretty quickly. The ten-part series was created by director Gareth Evans (The Raid, 2011), alongside creative partner Matt Flannery.

In an interview with Sky News, Evans revealed that he went undercover with real police officers to work on the finer details of the show. "It was interesting titbits and facts about the city and how things happen," he said. "It was good to understand how it operates, that there are people that you're never, ever going to know, and that functions in our show."

However, despite gaining this insider knowledge, it appears much of Gangs Of London's gruesome scenes came from imagination of the show's creators rather than any specific, real-life events.

Interestingly, Gangs Of London is also loosely based on a very, very old Playstation game of the same name, after Evans acquired the video game rights from Sony. According to Metro, the 2006 game "wasn’t exactly a success." The newspaper continues: "It holds a score of only 52 on Metacritic, with reviews ranging from it being simply average to simply awful."

The original plan was to turn Gangs Of London into a film franchise, but Evans decided against it. Speaking about this decision to Sky News, he said: "One of the things I love about London is that you can step on to any street and hear 10, 15 different languages, all spoken at once. That’s really unique and it’s such an interesting characteristic of the city. And I felt like if we were going to do a film franchise, we would have two-thirds of our running time focused purely on our central characters, and then only a third left to explore the side characters that populate that world. That wasn’t enough. I felt like we wouldn’t do justice to the myriad of different diverse cultures and ethnicities that make up the city."

He added: "I pitched it back saying this should be a TV show because you can afford to go off and detour for 10 to 15 minutes and spend time with other characters, and learn about them in more detail.”

All episodes of Gangs Of London season one are available to watch on NOW TV.