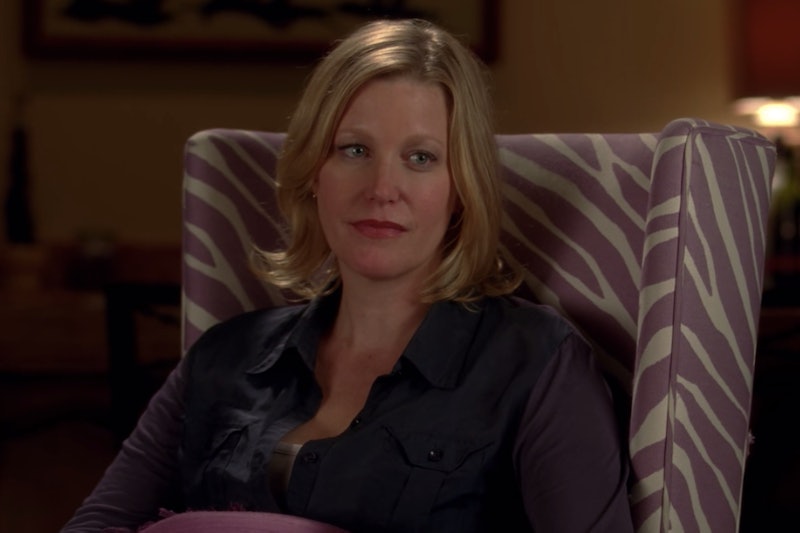 Six years after the AMC show went off the air, Breaking Bad is coming back with a Netflix movie on Friday, Oct. 11. And while director Vince Gilligan shared in an interview with the Hollywood Reporter that there would be ten familiar faces in the film, called El Camino, he didn't reveal whether Skyler would be in the Breaking Bad movie. In fact, the only characters Gilligan confirmed would appear were Skinny Pete (Charles Baker) and Badger (Matt L. Jones), who also appear in trailer.

In an interview with USA Today, Gilligan shared that he was loathe to bring back too many Breaking Bad characters simply for fan service. "You just go where the story takes you," the series creator and film director said. "Certain characters had to come back, and others I would've liked to have seen in the movie but didn't quite fit." So it's certainly possible that Walter White's (Bryan Cranston) long-suffering wife will make an appearance during El Camino.

As audiences may or may not recall, Skyler (Anna Gunn) was last seen in the finale when Walt gave her the lottery ticket containing GPS coordinates to Hank and Steve Gomez's bodies. "Call the DEA once I leave," he told his estranged wife. "Tell them I was here — that I forced my way in. Tell them I wanted bacon and eggs on my birthday and that I gave you that ticket."

He urged her to make a deal with the feds before finally — finally — admitting his motivations. "I did it for me," Walt admitted. "I liked it. I was good at it."

In doing so, Walt strung his wife and son along for years — all while claiming he was doing it for them. Meanwhile, some Breaking Bad fans were similarly awful to Gunn in the real world. But while she said in a 2013 New York Times op-ed that the role was "one of the most rewarding creative journeys I've embarked on as an actor," her character also sparked a bewildering amount of animosity.

In her op-ed, Gunn described the hate directed at Skyler in upsetting details — vitriol which often extended to the actor herself. She recounted the Facebook pages dedicated to her character with names like "I Hate Skyler White" and another whose name she couldn't print in the Times (the latter had tens of thousands of likes, she said).

"A typical online post complained that Skyler was a 'shrieking, hypocritical harpy' and didn't 'deserve the great life she has,'" Gunn recounted. "The consensus among the haters was clear: Skyler was a ball-and-chain, a drag, a shrew, an 'annoying bitch wife.'"

However, the hate didn't stop at Gunn's Breaking Bad character. "At some point on the message boards, the character of Skyler seemed to drop out of the conversation, and people transferred their negative feelings directly to me," Gunn continued in her opinion piece. "One such post read: 'Could somebody tell me where I can find Anna Gunn so I can kill her?'"

In a 2018 interview with Entertainment Weekly, the actor described this resentment as "very bizarre and confusing to us all." She continued, saying, "It was a combination of sexism, ideas about gender roles, and then honestly, it was the brilliance of the construct of the show." Indeed, Walt is an antihero in every sense of the word, and it's a credit to Gilligan's writing that he became such a multilayered and sympathetic character, but it was also troubling that so many Breaking Bad fans took his side.

Fortunately, Gunn's coworkers were supportive of her. "I figured Walt would be the one that'd be hard for people to sympathize with," Gilligan told EW. "Suddenly, lo and behold, we're hearing this animus toward Skyler White. To this day, it confounds me." Cranston was similarly baffled, telling EW that the backlash "affected [Gunn] deeply."

Fortunately, the actor has been able to move on from Skyler. Since Breaking Bad went off the air, the actor has appeared in Gracepoint (the American remake of Broadchurch) opposite David Tennant and played a supporting role in Sully, among others. Earlier this year, Gunn also reprised her character Martha Bullock in Deadwood: The Movie, which reveals she's game to revisit projects if the situation warrants.

So hopefully Gunn will surprise fans and make an appearance in El Camino, but if not, that likely means that Skyler White is doing just fine in Walt's absence.

This article was originally published on Oct. 10, 2019