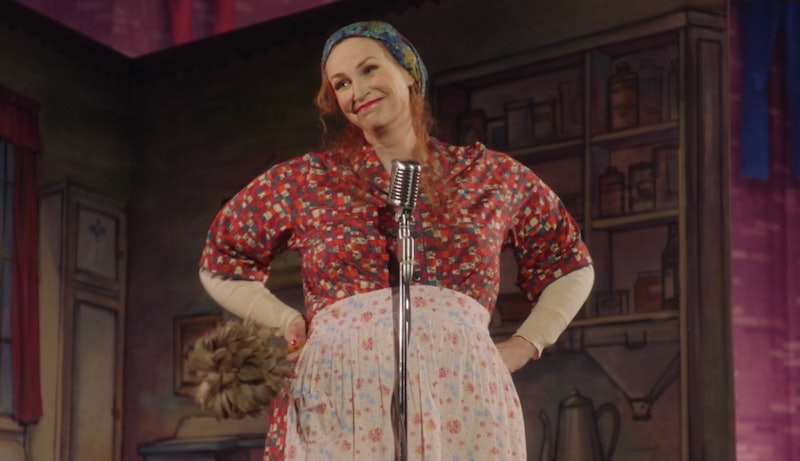 The Marvelous Mrs. Maisel boasted a stellar cast from the start. Rachel Brosnahan shines as its titular character, and support offered by the likes of veterans like Alex Borstein and Tony Shalhoub certainly doesn't hurt. But toward the end of its first season, the Amazon series brings on yet another familiar face — Jane Lynch. Lynch plays Sophie Lennon, the top female comedian in New York, whom Midge is vying to perform an opening set for. The show takes place in the late 1950s, and its historical leanings are clear throughout the season. So, was Sophie Lennon a real comedian? Spoilers ahead for Episode 7 of The Marvelous Mrs. Maisel.

There's no evidence to support that Lennon's character was based on one specific woman, but she did represent an outdated — and sadly, sometimes still persistent — point of view regarding female comedians. Onstage, Lennon is a cartoon. She speaks with a thick Queens accent and waves a feather duster as she cracks crass jokes about her run-down neighborhood and how "overweight" she is. When Midge meets her after the set, she declines a handshake — she wants a hug. When Midge visits Lennon's home later in the episode, though, Lennon presents a completely different picture.

Rather than the shabby apartment in the depths of Queens from Lennon's act, Midge arrives at a sprawling, lavish Upper West Side apartment. She's offered French desserts and tea by a staff of butlers while Lennon sits across from her, now with perfect makeup, golden ringlets in place of the frizzy wig she wore onstage, and donning a floor length gown. The Sophie Lennon that audiences knew is nothing more than an act — the real Lennon probably had never touched a feather duster before. In fact, she told Midge, she doesn't remember the last time she was in her own kitchen.

But the fact that Lennon uses a stage persona to finance a luxurious lifestyle isn't necessarily the problem (though it's worth noting that her persona is definitely outdated and stereotypical). It's what she says to Midge. "So tell me, what is your gimmick? Your persona?" Lennon asks her. "Oh, I don't have a persona," Midge responds. "I'm just me." A shocked Lennon tells her that this won't do — that no one wants a woman to be herself onstage. When Midge points out that male comedians like Bob Hope don't have "personas," Lennon argues that they don't need one because they're men. She goes on to say that men don't want to laugh at Midge — they want to sleep with her. "You can't go up there and be a woman," she tells her. "You've got to be a thing."

It's a troubling attitude that plagues female comedians and actors alike — then and now. The idea that a woman can't be feminine, attractive, and funny at the same time has been proven untrue time and time again — from modern successes like Mindy Kaling to icons like Joan Rivers — the latter of which Rachel Brosnahan studied in preparation for the role of Midge, per Vanity Fair. The notion that a female comedian has to cover up her sexuality or morph herself to have more "masculine" or "unattractive" qualities is simply an extension of the idea that women, by nature, can't be funny as they already exist. But sadly, it's still something women have to deal with today. "Women's comedy" can seem, at times, to still be some exclusive niche that audiences believe they can't enjoy unless they, too, are women, while male stand-up comics for some reason hold a more universal appeal. It's no wonder that men in that industry, traditionally, hold the power over female comedians — something we've seen, especially in recent weeks, doesn't make for a healthy or safe environment for women reaching for success.

In an interview with Vulture, Brosnahan was asked about her Marvelous Mrs. Maisel role possibly "performing womanhood" onstage and feeling pressure to look a certain way. But Brosnahan has a different perspective: "I think, for Midge, it doesn’t feel like a pressure. As a modern audience, we look at it and interpret it that way. But I genuinely think for Midge, she is a model woman of her time and it’s something that she enjoys," she said. "That makes her feel complete. It’s not about some external expectation, at least not consciously. It’s something that makes her feel like her, and it gives her great sense of achievement and satisfaction."

Midge is happy with who she is. She likes wearing dresses and pretty heels, and she feels good with a full face of makeup. So, when Midge is hit with an icon like Lennon telling her that she can't be her authentic, feminine self, it comes out of left field. "You wanna get ahead in comedy? Cover up that hole," Lennon says in one of her most cringe-inducing lines. Thankfully, though Lennon and her agent hold the power to completely transform Midge's career if she were to follow this horrifying advice, Midge won't have it.

All good questions, and ones that haven't disappeared from modern women's lives — not by a long shot. We just have to keep being like Midge and refusing to cave to what society unfairly demands.

More like this
Linda Ronstadt’s “Long Long Time” Plays A Pivotal Role In The Last Of Us
By Brad Witter
Michael B. Jordan Tackled His "Public Breakup" With Lori Harvey On 'SNL'
By Brad Witter
Here’s What Happens To Bill & Frank In 'The Last Of Us' Video Game
By Brad Witter
Twitter Is Burning As Phoebe Dynevor Reveals Daphne’s 'Bridgerton' Exit
By Sophie McEvoy
Get Even More From Bustle — Sign Up For The Newsletter
From hair trends to relationship advice, our daily newsletter has everything you need to sound like a person who’s on TikTok, even if you aren’t.