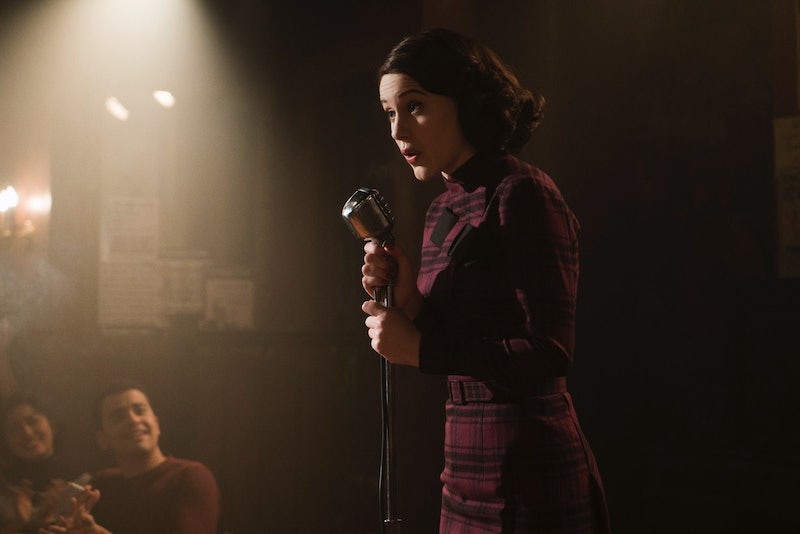 The mannered, high-class confines of 1950s Manhattan aren't exactly the first place you'd look for firebrand feminism, but then again, Miriam "Midge" Maisel is just as an unlikely source. As the heroine of Amazon's The Marvelous Mrs. Maisel — a newly debuted comedy from Gilmore Girls creators Amy Sherman-Palladino and Daniel Palladino — Midge is the epitome of mid-century womanhood. She's married with two children, lives in an immaculate Upper West Side apartment, and spends her days systematically regimenting her figure, tending to her archetypal Jewish family, and sneaking in and out of bed to primp and preen; after four years of marriage, it seems, her husband has never seen her without full curls and fresh makeup. Midge is a woman not only content to lead the life society has scripted for her, but who outwardly, unquestionably enjoys it.

So when her husband decides to leave her for his secretary, she's apoplectic. "Midge is someone who fits in better than anyone has ever fit in before," star Rachel Brosnahan tells Bustle. She's never had to work, her life has, so far, gone according to plan, and she's always had this innate, unwavering confidence. Feeling vulnerable, feeling unsure, that's foreign territory for Midge — which doesn't quite make her relatable or initially easy to root for.

"The way I think of Midge’s journey is as a second coming of age story. She’s living her dream, and then everything falls apart," Brosnahan says. "But Midge is somebody who doesn’t know any way but forward, and she’s forced to reinvent herself. In doing that, she finds this voice she didn’t know she had."

And yet, that voice has always been there, stewing beneath the surface, lapping at the sides. When Midge treks downtown to the Gaslight Café — a Greenwich Village club where her husband has been hopelessly nursing an amateur stand-up career off stolen material — it boils over the edge and roils into the public. It's there, drunk on red wine and raw emotion, that Midge saunters onstage, commandeers the mic, and discovers it's her, not her husband, that might have a knack for comedy. And, more than that, that she has something to say — something magnetic and powerful and feverishly funny.

"She’s always been this person, but when everything is perfect, you don’t have a whole lot to talk about necessarily," Brosnahan says. Now that she's separated from her husband, "the rose-colored glasses come off and she’s beginning to see the world in a new way, to notice things that she didn’t notice before. She asks questions about what kinds of different women are out there, the ways in which they are allowed to use their voices, what we expect of them, the standards that exist between women and men."

For Midge, though, this isn't some seismic awakening, nor is it a sudden induction to the front lines of feminism. It's her first step toward independence, yes, but it's a reluctant one, and she spends much of the season at odds with the kind of woman she thought she was and the kind of woman she seems destined to be. In fact, if it hadn't been for some cajoling from jaded talent manager Susie (Gilmore Girls alum Alex Borstein), Midge might have chalked up her stint at the Gaslight to a drunken outburst recalled amid the haze of morning and subsequently forgotten. Instead, it blows open the floodgates of potential, and Midge is left swimming dizzily in its wake, terrified and tempted.

"One of the things you’ll see with Midge is the struggle between, 'I have this new voice and it feels good,' and also wanting things to go back to exactly how they were before," Brosnahan says. "She’s not exactly a ra-ra feminist when we meet her. The first time she ever does stand-up, it’s not stand-up at all. It’s a prolonged mental breakdown. And that’s true for the second time, and the third time, and the fourth time ... This idea that she could become a comedian is one that you’ll watch her begin to wrap her head around and feel both intimidated by and exhilarated by at various points throughout the season."

As a show that puts authentic, strong-willed women at its center and pushes back against an industry that's still openly, regrettably, and often toxically a boys' club, The Marvelous Mrs. Maisel is intrinsically feminist. For now, though, it's wearing that badge quietly; Midge isn't as focused on changing the world as she is finding her place in it. But Brosnahan promises the roots are there, lying in wait. And knowing Midge, it won't be long before they break from the ground and come barreling, unstoppably, to screen.