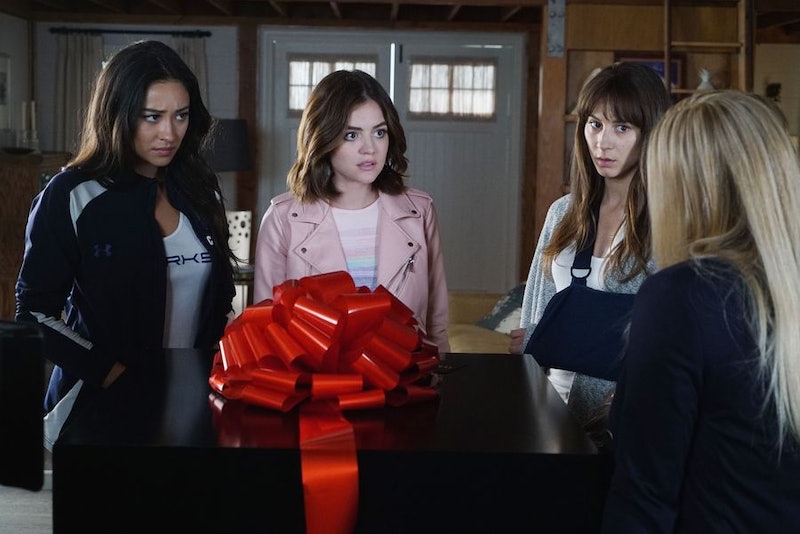 When Mary Drake declared she was Spencer's mom in the Season 7A finale of Pretty Little Liars, I was convinced it was a major red herring. But, Veronica Hastings confirmed her story in the 7B premiere and, as far as we know, she has no motive to lie. Still, there must way more to the story — and I remain convinced that Spencer has a twin on Pretty Little Liars who wasn't adopted by the Hastings. The twin theory has been a popular one since Season 7A — and twins run in the DiLaurentis family, so Spencer's parentage lends further credence to the theory. Now I can't help but wonder if Spencer's twin is Uber A on Pretty Little Liars?

Apparently, I'm not the only one who thinks this is a very real possibility. Tumblr user the-outlast presented a lot of compelling evidence that Bethany Young is Spencer's twin and Uber A. It's surely no coincidence that we haven't seen Bethany's face, which is why many viewers have speculated for a long time that she's Spencer twin. Furthermore, flashbacks have shown that she called Jessica "Aunt Jessie" — and Tyler Blackburn told US Weekly that viewers have "kind of" met Uber A. Again, this is constant with the Bethany theory — she was shown in a Radley flashback sequence, but she's not a character we really know.

And, Spencer's dream sequence of Maddie Ziegler/Mini Sia dancing in Radley still hasn't been explained. Ziegler bears a resemblance to Spencer, so it's been theorized that she has repressed memories of a childhood stay at Radley. But we know that Bethany Young grew up there, so it seems more likely that Spencer's subconscious was hinting that she has a twin who spent time at Radley.

The elaborate theory suggests that Charlotte, not Bethany, killed Marion and Jessica covered for Charlotte. So, Bethany could be responsible for the deaths of Jessica, Charlotte, and Sara Harvey. She's seeking revenge on everyone she deems responsible for her own life being ruined. The user also points out this major clue that I totally missed — when Spencer and Aria visited Dr. Cochran, he said he delivered "two of Mary's babies," implying that she has more than two children.

Furthermore, there's evidence that Wren has been Uber A's helper all along. In the Season 7A premiere, Mary speaks with someone on the phone who Mona describes as "a man with an accent that's maybe Aussie or British." It couldn't have been Rollins, because the pair had been out of touch for several days and Mary expressed frustration that he didn't answer her calls during that time.

Bethany as Uber A also fits in with another new, plausible theory — that the all the members of the "A team" are pawns in a board game. Bethany is the one who "took over" the game from from Mona, and then manipulated Charlotte to take part. Much like Mona, Charlotte became addicted to the game — but Uber A forced her to identify herself as part of the game.

The biggest hole in this theory is that, as far as we know, Bethany is dead. But this Tumblr super sleuth makes an astute observation — Mrs. Grunwald pulled Ali from her grave, but a separate scene showed a person with a red sleeve pulling someone from the ground. So, on Rosewood's most eventful night, both Ali and Bethany's lives were saved. Whoever's in Bethany's grave was murdered and buried while wearing that now-infamous yellow top.

My head is spinning, but this theory is totally compelling. Many viewers have expressed frustration that Bethany has been a major focus throughout the series, but her character has remained fairly irrelevant. Furthermore, there have been other hints that Spencer has an "evil twin" — when she was struggling with a drug addiction, Veronica used that exact phrase to describe her daughter's behavior.

And, in a recent interview with Cosmopolitan, I. Marlene King stated that she's known Uber A's identity since day one — so it stands to reason that it's a character we've known about since Season 1. King also tweeted that the final reveal will be sad for some viewers because "every villain has a real human story." Growing up at Radley and being wrongfully accused of murder as a child certainly has all the makings of a sad background story.

Everyone in Rosewood remains a suspect, but Bethany Young just moved to the top of my list.