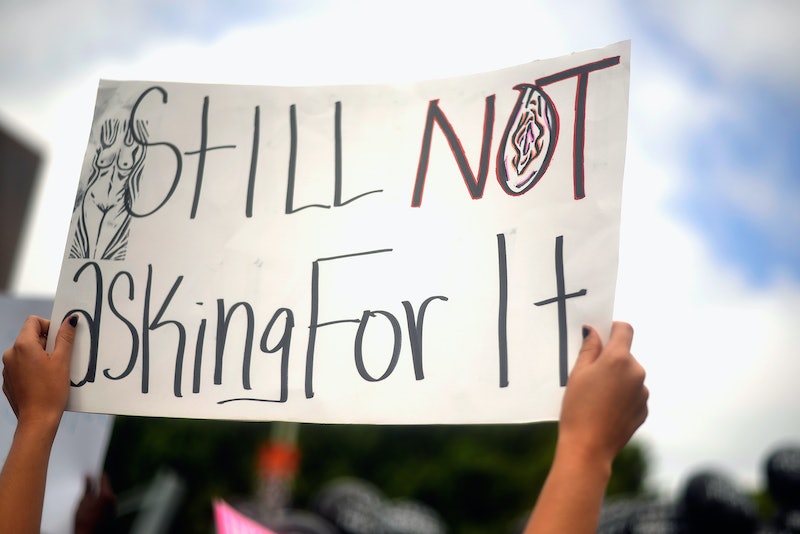 Back in April, Yale Law School graduate Alexandra Brodsky published a paper about a form of sexual assault known as "stealthing," the nonconsensual removal or intentional damage of a condom during sex. It sparked a national discussion about the practice and underscored the lack of comprehensive policy to address sexual assault. Months later, two Democratic lawmakers, Reps. Carolyn Maloney and Ro Khanna, are pushing for stealthing to be taken into account in discussions on sexual assault legislation, demanding a congressional hearing on the practice and its effects.

Maloney and Khanna issued a letter on Wednesday requesting the House Judiciary Committee to convene a hearing on stealthing, acknowledging in a press release the consequences of removing a condom during intercourse without the partner's consent.

"I am horrified that we even need to be having this conversation, that a sexual partner would violate their partner’s trust and consent like this. Stealthing is sexual assault,” Maloney said in the release. Khanna called it a "dangerous form of sexual assault." Both stressed the need for a hearing on it, particularly during a time when discussions about consensual sex and campus sexual assault could shape policy.

“We need a hearing so that Congress can hear from the experts about how to best address this issue as we continue to amend our country’s and universities’ responses to sexual assault and rape," Maloney added.

Brodsky's paper on stealthing ignited a furious discussion. In her article, she included accounts from survivors whose sexual partners had "stealthed" them. "Both men and women describe having sex with male partners with penises who, during sex, removed the condom without their knowledge," Brodsky wrote. While the responses to being stealthed vary, Brodsky noted that survivors feared unwanted pregnancy and sexually transmitted infections, and they "experienced nonconsensual condom removal as a clear violation of their bodily autonomy and the trust they had mistakenly placed in their sexual partner."

Perhaps one of the most startling revelations from Brodsky's paper was the existence of online forums where perpetrators encourage and teach others in detail about "how to successfully trick a partner and remove a condom during sex." She added:

While one can imagine a range of motivations for “stealthers” — increased physical pleasure, a thrill from degradation — online discussions suggest offenders and their defenders justify their actions as a natural male instinct — and natural male right.

Brodsky's paper on stealthing — and the ensuing conversation surrounding it — comes at a time when authorities are struggling to address sexual assault cases. Harrowing reports of people being belittled, blamed, and re-traumatized while attempting to report their alleged sexual assault have been held up as examples of how the current system fails survivors.

Casting a long shadow on the raging debate on sexual assault is the controversy over the Department of Education's Title IX campus sexual assault guidance. Handed down during President Obama's term, the guidance provided authorities on college campuses with rules on how to handle sexual assault cases.

In September, President Trump's Education Secretary Betsy DeVos officially rescinded the Title IX sexual assault guidance in a move that sparked widespread outrage. Critics have claimed the rules infringe on the accused's right to due process, though advocates for sexual assault survivors insist that they were a step in the right direction towards building a system that better protects survivors.

As the government continues to evaluate how best to move forward on sexual assault policy, Khanna and Maloney's letter is an effort to include stealthing into consideration. Similar bills in California and Wisconsin have been introduced in the past few months to classify stealthing as sexual assault, though Maloney and Khanna are pushing for a federal solution.

Demanding testimony from expert witnesses "would offer valuable insight into the details and implications of the practice itself as well as the legal and political consequences Congress should consider," the letter read. The hearing, the two congress members wrote, could help "inform our next steps on crafting effective policy to combat 'stealthing' and sexual assault more broadly."