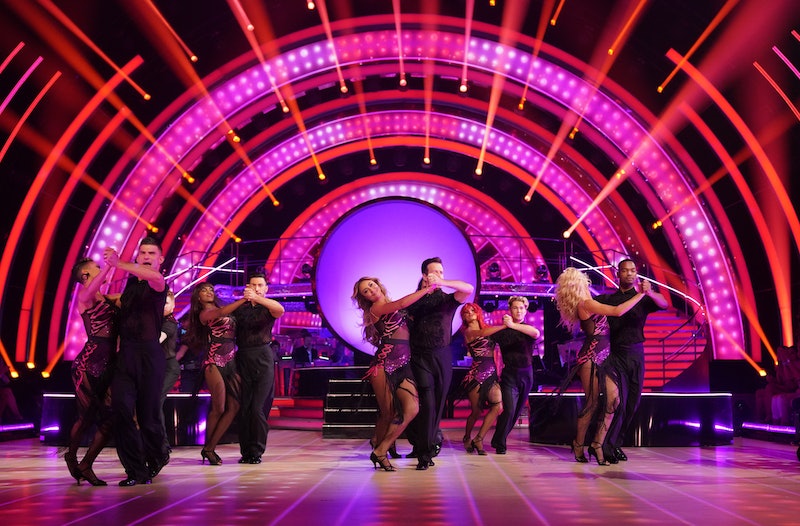 Strictly Come Dancing is back, and for the next few months our weekends will once again be taken over by the BBC ballroom competition. Yes, the ever-popular dancing series has returned for a staggering 17th run, and this year's lineup of celebrity contestants will be taking to the famous dance floor each week in a bid to secure your votes. But is Strictly Come Dancing live? Here's everything we know about the show's filming process.

According to the Radio Times, Saturday night episodes of the BBC competition series are indeed filmed completely live — meaning any unfortunate mishaps or slip-ups will be spotted by the millions watching at home. However, eagled-eyed viewers might have noticed that the very mentioned of the word "live" doesn't pop up during the show's Sunday evening slot, and thats because the Strictly Come Dancing results shows are actually prerecorded.

Confused? Well, allow me to explain. Following the conclusion of the live Saturday night show, the contestants, judges, and studio audience are given a quick break to allow viewers at home to cast their votes — and once the vote lines close, filming for the Sunday night results show gets underway on the same night. After some quick outfit changes, hosts Tess Daly and Claudia Winkleman are welcomed back into the London studio to deliver the results, and although filmed ahead of time, certain segments cannot be re-recorded, including the moment contestants discover their fate on the BBC series. According to the Radio Times, filming usually wraps up late on a Saturday night, and the onlooking studio audience are politely asked to keep the results secret upon their exit.

One new addition to the Strictly Come Dancing class of 2019 is ex-Emmerdale star Kelvin Fletcher, who was brought in as a last minute addition to this year's lineup after Made in Chelsea's Jamie Laing was forced to bow out of the series. As previously reported by Bustle, the reality star announced his Strictly departure after suffering a foot injury during the recording of a group dance, and although fans will surely miss his presence, viewers still have a lot to look forward to with this year's remaining contestants.

According to the Radio Times, the 17th season of Strictly Come Dancing has welcomed back judges Craig Revel Horwood, Bruno Tonioli, and Shirley Ballas — and following Darcey Bussell's departure from the BBC series, Motsi Mabuse will be making her Strictly debut on this year's panel.

So, with a fresh lineup of judges and contestants, this year's Strictly promises to be better than ever before, and I cannot wait to see how the celebrities fare in the competition.

Strictly Come Dancing airs on Saturday and Sunday evenings on BBC One.

More like this
Twitter Has Renamed Ekin-Su After *That* 'Dancing On Ice' Performance
By Sophie McEvoy
Joey Essex Is Rumoured To Be Dating A 'Love Island' Favourite
By Sam Ramsden
'Love Island' May Have Just Lost Its Main Character
By Jason Okundaye
Spencer Matthews’ Impressive Net Worth Expands Far Beyond Chelsea
By Sam Ramsden
Get The Very Best Of Bustle/UK
Sign up for Bustle UK's twice-weekly newsletter, featuring the latest must-watch TV, moving personal stories, and expert advice on the hottest viral buys.