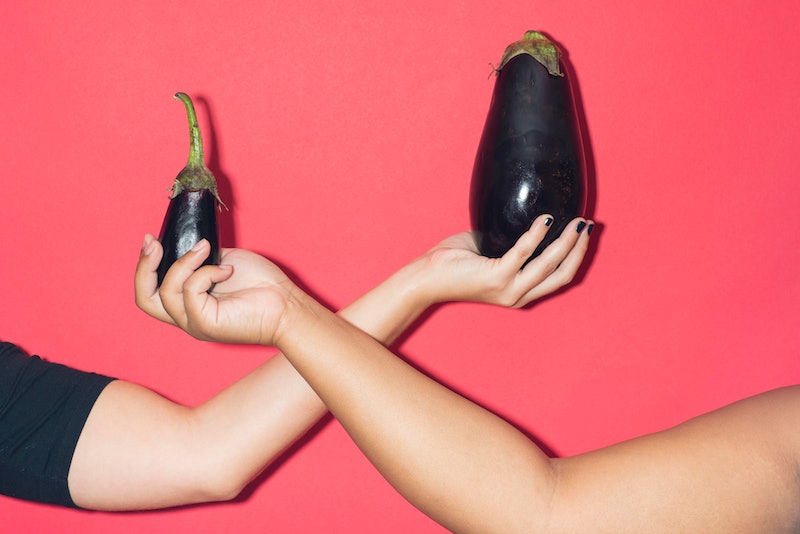 Summer 2018 may well be known to future generations as the summer of dick. Mere weeks ago, comedian Pete Davidson's reportedly formidable penis had the whole internet chattering about Big Dick Energy (or BDE, the subtle swagger a generous genital endowment imparts). Perhaps you thought all that BDE fuss would be the first and last time you'd live to see the news cycle overrun by peens, but no. Today, there's a new dick discovery: "summer penis."

What is summer penis? So glad you asked. According to a handful of Reddit users, summer penis sets in during warmer months, when rising temps allegedly make their penis appear bigger. Or, as Tracy Moore put it in a MEL Magazine article that brought all of this to everyone's attention in the first place, it's "an elusive phenomenon that answers to the sway of the seasons. No barbell can boost it; no foodstuff can fill it. Summer penis is a temporary dick fluctuation that, thanks to the heat and warmth, gives you a months-long leg-up on shaft size."

Now, we already know — or would know, were humans not monsters primed to ruin everything including a study poised to deliver definitive evidence on the matter — that BDE exists. Does summer penis exist? Some Redditors say yes: The user who planted the summer penis seed in our collective consciousness attests to experiencing "better erections" in these warmer months, and a tendency to be "more of a shower instead of a grower." Another testicle-haver wrote that their balls hang "down like if they were trying to get to my knee," whereas in the cold, dark winter "they look like a hard little brain." But maybe we can attribute that one to the fact that everything feels a little droopier in the sweltering expanse between May and August.

Because inquiring minds want, nay, need to know, we put the question to Landon W. Trost, MD, a urologist with the Mayo Clinic in Rochester, Minnesota. Is there any medical or scientific reason to expect that erections may swell in summer heat? According to Trost, we don't have conclusive evidence on that score — apparently, penile fluctuation by season is not a subject into which people have poured research dollars — but the answer will likely be subjective.

"From an 'is it possible' standpoint, I think there are certain things you could say may make it more likely for people to have more of an erection — or maybe less of a contracted penis — in the summer months," Trost tells Bustle. The same nerves that control all of our automatic functions, like breathing and heartbeats and dilating pupils, control erectile response, he explains. This is the autonomic nervous system, and it has two basic states: "Fight or flight" (the sympathetic system), and "rest and digest" (the parasympathetic system).

"The sympathetic one is kind of anti-erection, for the most part," he says. Think of it this way: "If you’re being chased by a bear, you don’t want to have an erection; you want to have blood going to your eyes and your muscles."

Instead, he says erections happen in the rest and digest system. "That’s when you’re not under any threat, there are no dangers around, and the body prioritizes other systems, such as digestion and sexual function," he says. It's all very intuitive: Relaxation kindles the sexy vibes, while stress kills the mood. As does a startlingly cold temperature: Icing the penis, or any other body part for that matter, "kicks in the sympathetic system," whereas "gentle heat will usually dilate veins." That means increased blood flow, which may encourage erections.

"It’s theoretically possible that erections may be easier [to achieve]," Trost says, even if they don't make for larger penis sizes.

"Erections are just kind of a spectrum-type condition," he says. "So if you have a maximal erection — let’s say it’s been several days since you had intercourse at all, and you’ve had a lot of mental and physical stimulation — that sometimes will relax the muscles in the penis more, so you get more of an engorgement. Whereas if it’s minimal stimulation, you may just get a partial engorgement. So it’s possible in summer months that it leans it more toward the erect [side of the] spectrum and less toward the contracted one."

A few other factors may contribute to the possible existence of summer penis. For one, people tend to be more active in this summer, and exercise promotes erectile function, Trost says. Additionally, a person's mood may be better in the summer than in the winter — although some people do experience summer-specific seasonal affective disorder — and when mood improves, libido improves, and that rising tide may also lift more penises. Trost cannot say for sure, because again, the literature has overlooked this obviously important topic. How rude.