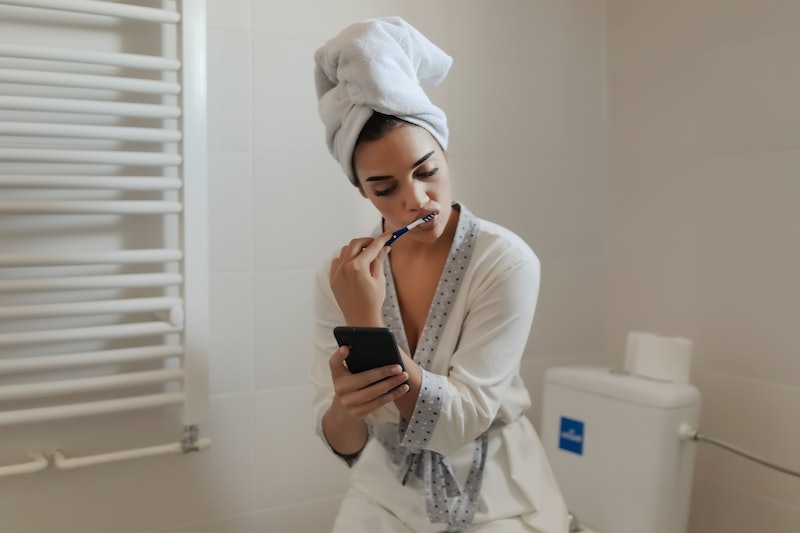 Now that technology permeates every inch of our lives, it's hard to leave phones behind, including when we have a shower, bath, or go to the toilet. Horror stories of germs are rife, but is it really that bad to take your phone into the bathroom?

A Verizon survey carried out in 2015 found that almost 90% of people take their phones into the bathroom. In other words, you're in the minority if you don't. But a number of experts advise against it. Not only could you be putting yourself at risk physically, but having your phone glued to your hand can also detrimentally impact mental health.

Phones themselves carry a lot of bacteria. Fun fact: research found they're home to 10 times as much bacteria as toilet bowls, per Time. But taking them into the bathroom can rack up that bacteria count. "Many bathroom surfaces, such as urinals, toilet seats, handles, sinks, and faucets, are covered in germs, and the [risk of] even more contamination of our phones becomes greater," microbiologist Jason Tetro explained to Thrillist.

A lot of bacteria is harmless, but some can be nasty. For example, faecal bacteria can transfer between surfaces. Viruses can ensue, per Self, potentially causing flus and food poisoning. Stomach upsets can also occur from E.coli and shigella bacteria — both of which can be found on your phone. Oh, and transferring certain bacteria from your phone to your face could result in skin breakouts.

There's little evidence to prove that people have gotten ill from their phones, but the device are a pretty ideal space for bacteria to thrive. As Dr. Ron Cutler told Metro: "Phones heat up a little bit, giving bacteria a nice, warm environment."

If you want to reduce the amount of bacteria likely to end up on your phone's screen, do not use it while on the toilet. In fact, keep it as far away from the toilet as possible. (Even the flush can spread germs.) If you absolutely cannot obey this rule, don't use your phone with the same hand you use to wipe or flush. And, of course, remember to thoroughly wash your hands. You can also wipe your phone with a cleanser specifically designed for such use, or simply use a clean cloth each time.

Taking your phone into what was once regarded as a safe space may also affect mental wellbeing. Free from distractions, the bathroom has long been the place to think and unwind. But, when your phone never leaves your side, you risk never being able to switch off.

Health risks aside, the steam and humidity may end up damaging your phone. Although some modern devices are waterproof, Google advises keeping its phones away from water or steam.

As with most things in life, there's no guarantee that taking your phone into the bathroom will result in damage to it or you. But if you want to stay on the side, it's best to avoid the risk.