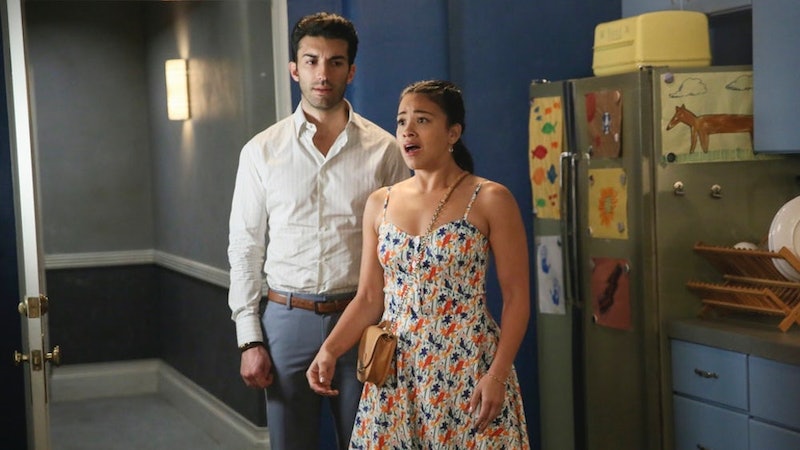 Jane the Virgin has dropped some pretty amazing cliffhangers throughout the years, but nothing can compare to the jaw-dropping moment at the end of Season 4 that revealed Jane's formerly-deceased husband, Michael, is actually alive and well. But since that seems like an impossible scenario, many fans may find themselves wondering: is that really Michael on Jane the Virgin or is there something more sinister at play here? There are a few theories floating around out there that could very well help all of this make some sense.

Of course, one of the many great qualities of this show has been making the impossible possible — like how Jane, a virgin, became pregnant through accidental artificial insemination. But bringing some back from the dead seems a little extreme even for this show, which understandably may make some unable to fully believe it's happening. The final few moments of the Season 4 finale, showed Jane walking into Rafael's apartment and seeing a very scruffy Brett Dier waiting there for her. Obviously, Jane is completely shocked to see her husband standing there, after believing him to be dead for several years. However, Dier's character doesn't actually say anything in those final few moments, which means it's entirely possible that he isn't Michael at all.

Sin Rostro has made a habit of wearing masks to conceal her identity, which means it's possible for others to do the same sort of thing. For all we know, this is simply someone wearing a very convincing Michael mask (though that doesn't explain the scruff). Or maybe Michael has an identical twin we never knew about, though series creator Jennie Snyder Urman appeared to debunk the twin theory during an interview with Entertainment Weekly last year while also being careful to neither confirm or deny if that really is Michael. "It’s not a twin," Urman assured the outlet, adding:

"I can’t say whether it’s definitely Michael, that will be answered in the first episode of the fifth season. There’s definitely going to be some questions because Rose has a dicey history, but it certainly looks like Michael. This person — and then we’ll talk about him as Michael for clarity — has been somewhere and has had a journey so we’ll be getting into that."

That being said, it did feel as though Dier's character recognized Jane when she came into the room, leading us to assume that yes, this is indeed Michael, and that he was forced to fake his own death for some unknown reason.

Funnily enough, this isn't the first time the series has pulled a fast one on us when it came to Michael's fate. Back when he was shot by Sin Rostro, fans were led to believe the injury had killed him only to find out later on that wasn't the case at all. So this will serve as the second time he's returned to the land of the living. Let's hope this time it sticks and that he's able to explain to Jane why he was forced to put her through so much pain and heartache.

More like this
We Still Have A Few Unanswered Questions At The End Of 'The Suspect'
By Sophie McEvoy
Paul Mescal, Man Of Mystery
By Samantha Leach and Heather Hazzan
Mike Flanagan Teases 'The Midnight Club' In This Exclusive, Creepy Clip
By Grace Wehniainen
Caleb McLaughlin Details Racism From 'Stranger Things' Fans
By Radhika Menon
Get Even More From Bustle — Sign Up For The Newsletter