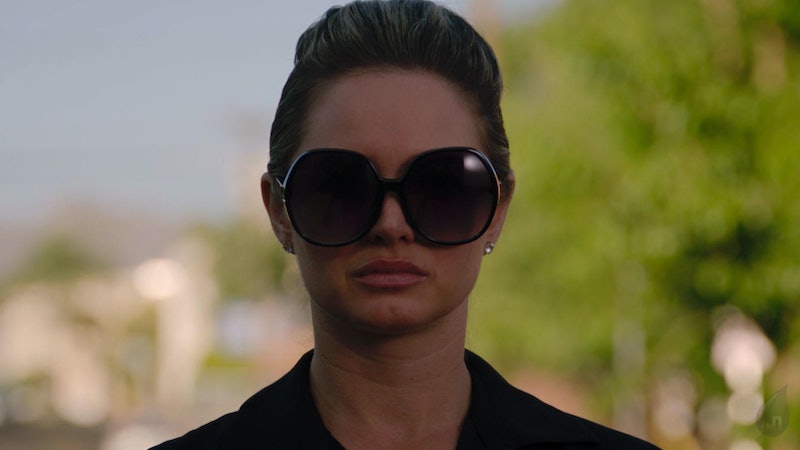 Murderers, ghosts, and villains terrorizing babysitters is a well-worn trope in horror and thriller flicks. See: The Turning of the Screw, Scream, or The House of the Devil — all fine examples of babysitters getting way in over their heads after realizing that their gig taking care of someone else's kids isn't quite all it was cracked up to be. The Au Pair Nightmare, premiering May 17, is Lifetime's latest entry into the subgenre, and, like any good thriller, its story seems to be one that's haunting enough to have people wondering; is The Au Pair Nightmare based on a true story?

In The Au Pair Nightmare, Taylor (Brytnee Ratledge) drops everything to move out of state following the death of her fiancé. She sets out to build a new life elsewhere, working as a nanny for wealthy couple John (Tristan Thomas) and Allessandra (Annie Heise), and their young daughter, Emily (Gianna Gallegos). But of course, there's more to the perfect family than meets the eye, and as Taylor begins to uncover their unsavory secrets, she finds herself on the receiving end of some equally unsavory threats.

The Au Pair Nightmare packs a lot of the twists and turns that can be expected of a babysitter-centered thriller. But all of those twists and thrills seem to also be living solely in the realm of fiction, as there isn't anything indicating that the film is or even could be based on a true story.

Details about the Au Pair Nightmare remain scarce, but director Joe Russo recently opened up about the film's opening score — and his description of the theme may shed some interesting light on the film's vibe. Russo told Dread Central, "We decided to upload the theme song to The Au Pair Nightmare, which, like the movie, is a Hitchcockian homage."

Russo then went on to share a bit about the composer, saying, "My composer on the movie, John Jesensky, is a big-time conductor. He’s traveled the world doing all the Harry Potter Live cinema concerts. He and I have also been friends since middle school and he’s done the music for all of my short films, so it’s exciting that we both got to make the jump to features together.”

More like this
Gerard Butler Insisted On Adding This Pivotal Scene To 'Plane'
By Catharina Cheung
Jemima Khan Used Her Own Life As Inspo For 'What’s Love Got To Do With It?'
By Darshita Goyal
James Cameron May Come To Regret His 'Titanic' Door Experiment
By Stephanie Topacio Long
Reese Witherspoon Confirms This Fan Favorite Will Return For 'Legally Blonde 3'
By Jake Viswanath
Get Even More From Bustle — Sign Up For The Newsletter
From hair trends to relationship advice, our daily newsletter has everything you need to sound like a person who’s on TikTok, even if you aren’t.