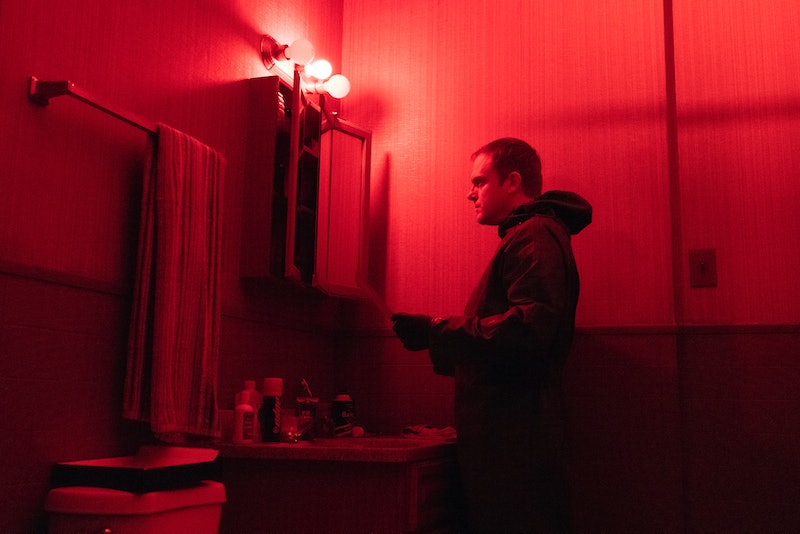 According to the Marvel website, Foolkiller has never faced off with Jessica Jones in the comics. But he has fought Hellcat, aka Patsy/Trish Walker. Since Salinger kills Trish's mom Dorothy in "A.K.A. Camera Friendly," she attacks him in the final moments of the episode. And while Jessica will try to stop her, Trish wants Foolkiller's blood on Jessica Jones.

Salinger in Jessica Jones is a highly-educated man with a number of degrees and his own twisted sense of justice. He targets people whom he considers frauds, which includes Jessica and her super strength. In the comics, Salinger is well-versed in poetry and eventually earns his degree in psychology. But he lives more literally by his name, killing people whom he considers fools. Foolkiller eventually puts his skills to work as a mercenary for hire with Deadpool's Mercs for Money. He also uses his degree as a psychotherapist. In the 2016 comic Foolkiller, Salinger works to rehabilitate super villains and kills the ones whom he can't help.

There are a number of Foolkillers in the comics, but Jessica Jones is using the Salinger version. And in the comics, he fights Hellcat while she's a member of the superhero group the Defenders (Jessica's crew in the Netflix Marvel universe). Walker's Hellcat leads him on a chase at the Defenders headquarters and he is ultimately defeated. However, his encounter with the Defenders leads to the group being disbanded and he escapes when an ambulance is taking him to the hospital after this fight.

Besides the Defenders, Salinger's Foolkiller also has a complicated with Spider-Man, aka Peter Parker, in the comics. Spider-Man gets him sent to a psychiatric hospital and while committed, he even has a brush with Captain America.

The Foolkiller in the comics doesn't appear to personally attack Trish or Jessica Jones like he does in the TV series. Instead, the Netflix version is more like a serial killer that has been seen in movies and TV before. And Jessica Jones showrunner Melissa Rosenberg and co-executive producer and writer Scott Reynolds know a thing or two about portraying serial killers on TV since they both worked as producers and writers on Dexter.

Yet, instead of their time on Dexter making it easier to create their version of Foolkiller, Rosenberg tells Bustle it actually made it harder. "A lot of it was also what not to do in terms of, 'We've done that before.' That kind of, 'Wait a minute, didn't we do that season whatever on Dexter?'" Rosenberg says with a laugh. "Coming up with something new was a challenge."

For Jessica Jones Season 3, the writers have made it so that the newly powered Trish wants to see this serial killer dead for killing her mom. But now that Jessica is trying to do the right thing, Salinger's Foolkiller might just live to see another day — although his fool, or fraud, killing days are definitely numbered.

More like this
Nicola Coughlan Shared A Lady Whistledown Excerpt From ‘Bridgerton’ Season 3
By Grace Wehniainen, Alyssa Lapid and Sam Ramsden
Netflix Reveals First Look At Wednesday In The 'Addams Family' Spinoff Series
By Bustle Editors
A New 'And Just Like That' Table Read Pic Confirms A Key Character's Return
By Jack Irvin and Grace Wehniainen
Viserys’ Fate On 'House Of The Dragon' Could Differ From The Book In This Surprising Way
By Grace Wehniainen
Get Even More From Bustle — Sign Up For The Newsletter